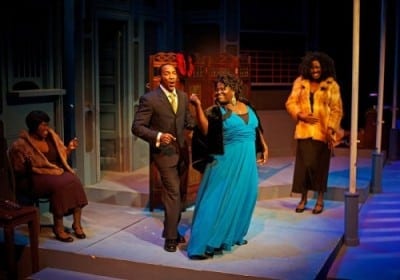 In his introduction to the world premiere of “Gut Bucket Blues,” True Colors Theatre Company founder Kenny Leon insisted that community and corporate support would help the theater get through this nagging recession.

It seemed appropriate, then, for Leon to tout this tribute to blues belter Bessie Smith, whose wild living and success in the Roaring Twenties gave way to the depths of the Great Depression. “Gut Bucket Blues” is often as bright and raucous as its subject, but also is done with an economy of scale that is reflective of back then — and of right now. The musical runs through November 7. 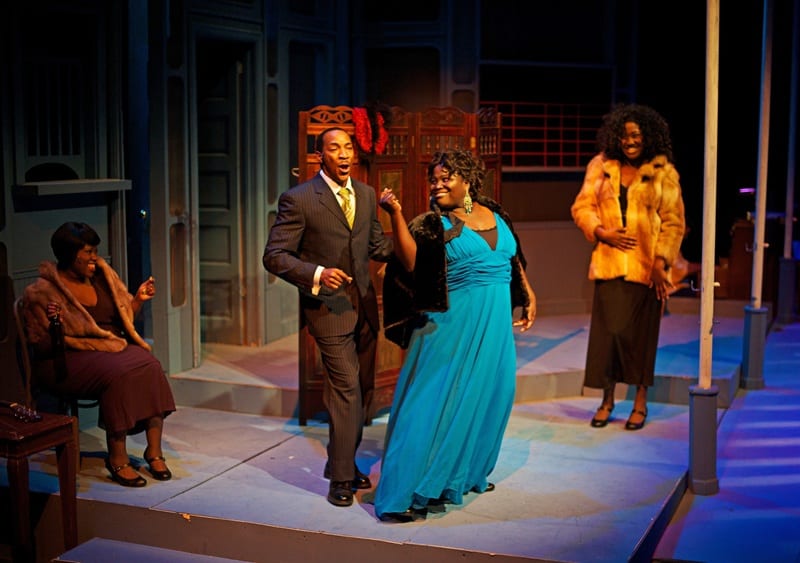 If it isn’t yet a success on a grand scale, “Gut Bucket Blues” is a hell of a value, packing 18 numbers into its two acts.

David H. Bell wrote and directed the musical, which aims to capture the scope and complexity of Bessie Smith’s life and career. Both were a study in excess and contradictions. Smith was the most successful African-American entertainer of her era, yet never felt compelled to pander to the white audience. She sang from the heart (and further south) with an earthiness that sometimes overshadowed a pristine alto timbre and perfectly controlled vibrato. A hard drinker, she antagonized everyone around her, yet could be unceasingly loyal. Big and bawdy, she was considered incredibly alluring and was known for her promiscuity and bisexuality. 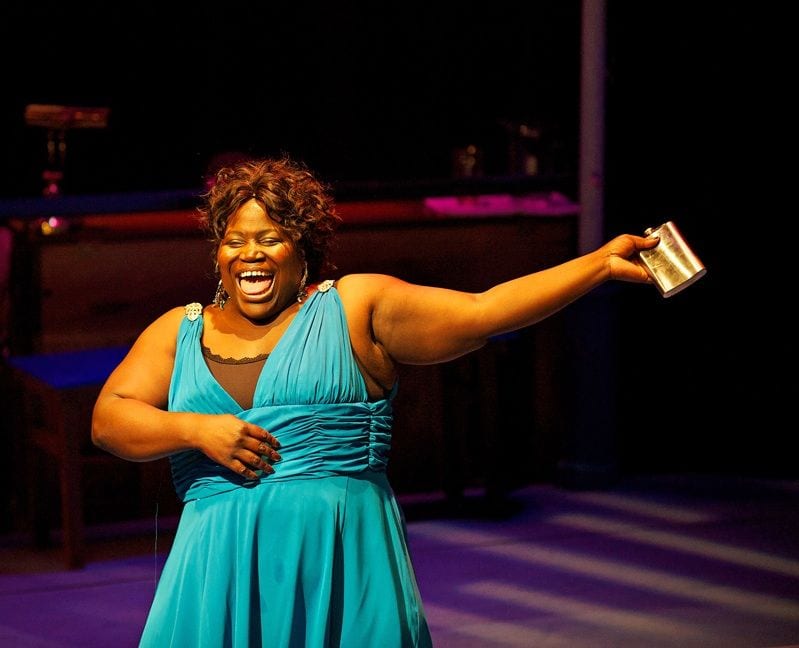 She made Columbia Records’ “race” label a major player in the 1920s, thanks to such classics as “Downhearted Blues,” “St. Louis Blues” and “Nobody Knows You When You’re Down and Out.” (Her complete Columbia output, all 160 songs, filled a five-volume box set released in 1993. I have the fifth volume and worship it.) More than anything else, she was a huge influence on the Jazz Age singers, including Billie Holiday and Sarah Vaughan.

Bell captures much of this, framing Smith’s story with a plot that often winds up at a train station to signify the various turning points in her career — her move from her hardscrabble childhood in Chattanooga to the bright lights of Atlanta, her recordings with Columbia alternating with grueling tours, her marriage to the controlling Jack Gee, and her descent in the 1930s as talking movies and the Great Depression took over.

As Bessie Smith, Adrienne Reynolds (above, with flask) is a worthy star of the show. She barges onto the stage with body jiggling, arms swinging and mouth cussing, all to the delight of the audience. Reynolds doesn’t try to imitate Smith’s vocal style — always a wise decision in productions like these. 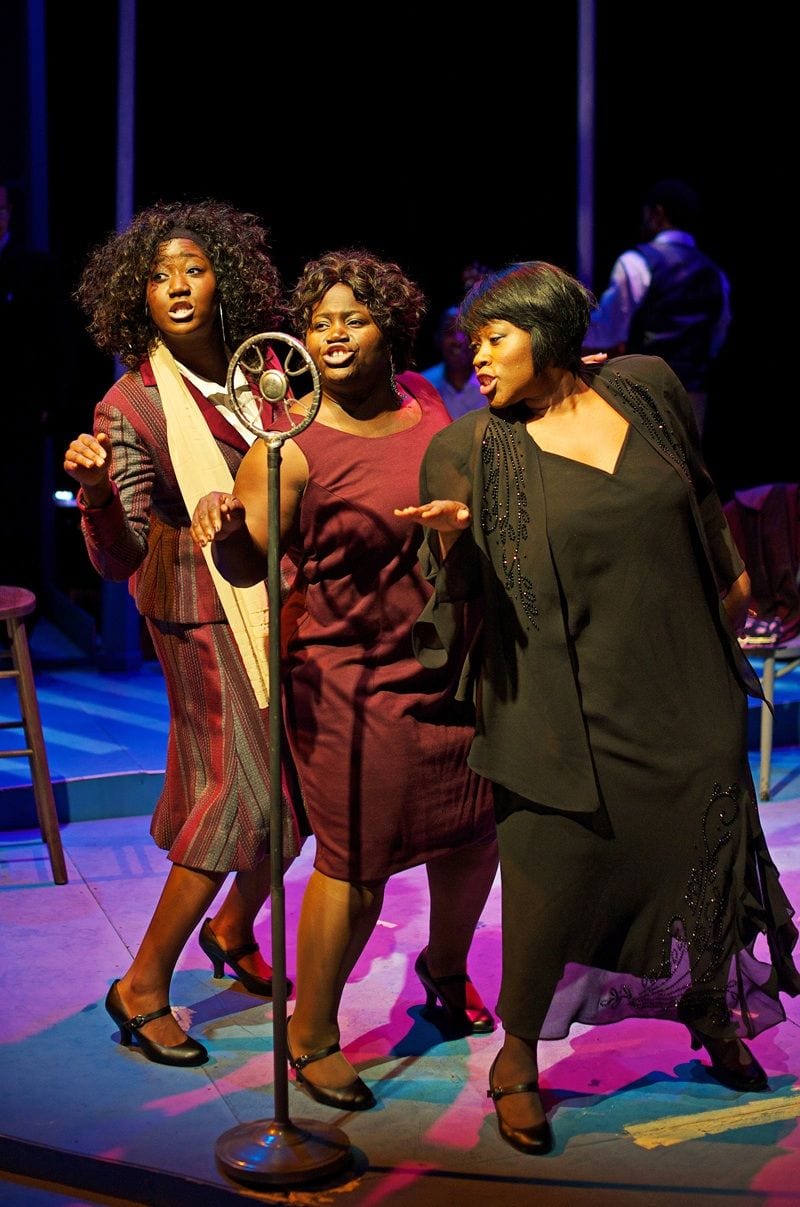 While she clearly possesses the singing talent and won over the audience on almost every number, Reynolds too often held back, as if even she was intimidated by Bessie’s presence. Chalk it up to opening-night jitters, because Reynolds clearly has the charisma for a more daring performance. Maybe she was just getting warmed up.

The supporting cast is already there, whether it’s in their superb backing vocals, solos, duets or ensemble productions. Latrice Pace is a particular joy to watch, especially early on as Smith’s blues-queen predecessor Ma Rainey, who was equally big, beautiful and bold in numbers such as “Wild Women Don’t Have the Blues.”

Jahi Kearse is effectively nasty and domineering as Smith’s husband Gee, while Christopher Morgan elicits sympathy as her frustrated brother Clarence. JC Long (playing all the show’s white characters, including Columbia boss Frank Walker) and Amber Iman (as one of the backup singers) warm to the task. There are some kinks still to be ironed out, most notably in the pacing; the first act breezes along almost too quickly, whereas the second slows to a crawl by the end. And then there’s Reynolds’ performance, which is sure to improve over time.

In his introduction, Kenny Leon, the consummate salesman, predicted big things for “Gut Bucket Blues” and suggested a production that could tour the country. With its limitations, the show might not be able to get that far, not just yet, but for now it’s a great way for recession-ravaged Atlantans to spend an evening, chasing the blues away.