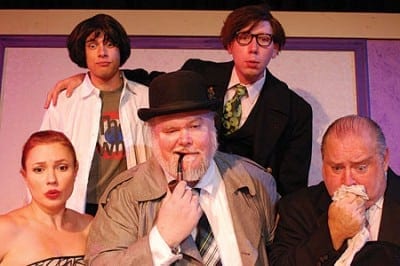 The times have caught up with “Loot.” Written by British playwright Joe Orton in the mid-1960s, it was a bit too offensive for many theater-goers of the day, with its bisexual bank robbers, deranged police inspector, murderous nurse and general assault on middle-class pieties, especially our conventions about funerals. These days, the elbow-in-your-eye sensibility of “Loot” pervades the culture, but even so, Orton’s wicked little farce has enough venom left in its stinger to deliver little zaps of surprise.

Now playing at Onstage Atlanta, “Loot” is set in the living room of Mr. McLeavy (Barry N. West), the epitome of British bourgeois cluelessness and obeying of rules. He is about to bury his wife, whose casket sits center stage. All are about to be seriously abused: McLeavy, his poor wife’s corpse, and even the coffin itself. 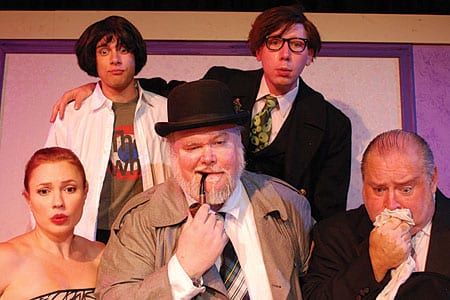 Before he can get to the funeral, McLeavy is hit on by his wife’s nurse, Fay (Colleen Shannon Gaenssley), a minx who has lost seven husbands in her short life, not all of them to natural causes. Then McLeavy’s son Hal (Doug Graham) bursts in, like a teenager on fire, followed by his boyfriend Dennis (Topher Payne). They have just looted a bank next to the funeral home where Dennis works, and, looking for a place to hide the money, they spy Hal’s mother’s casket. Mom, meanwhile, goes into a large bureau. (Chasing “Loot” at Onstage Atlanta, from left: Colleen Shannon Gaenssley, Doug Graham, David Klein, Topher Payne, Barry N. West.)

For a while, anyway. Given that the whole show takes place in one room, both Mom and the money move around a lot. Finally, add to the mix Inspector Truscott (David Klein), who soon shows up on the trail of the stolen money. Truscott at first appears to be a buffoon, but he is actually a lot more sinister and ends up being the mouthpiece for some of Orton’s anti-social jabs.

A staple of community theaters, “Loot” has a lot of what you expect in a farce: rampant chaos, shifting agendas, great physical comedy. And some of what you don’t, such as a glass eye as a key plot device, and the unexpected injection of violence that goes beyond slapstick.

Onstage Atlanta is a delightful little space tucked into the unlikely site of Decatur’s Suburban Plaza shopping center. The cast of six knock themselves out, but on the night I saw it, the smallish audience never gave back the laughs the production deserves. Sure, some of the English accents can be strained, but Orton’s lines are time-tested and usually get good laughs, such as when Fay places a copy of the Ten Commandments with Mrs. McLeavy’s corpse and remarks, ”She was a great believer in some of them.”

Standouts in the cast are Graham, whose young Hal is a quivering blob of hysteria, as he whimpers and knots his limbs into bizarre contortions as his loot nears being discovered, and Gaenssley, whose Fay is the coolest customer in a roomful of overheated idiots but who isn’t afraid to crawl around on all fours to look for a glass eye.