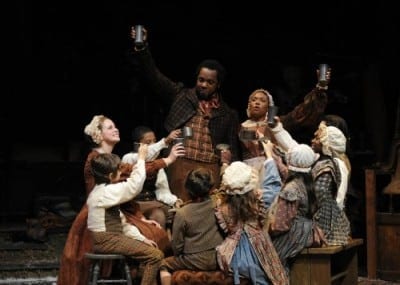 Review: Chris Kayser brilliant in “A Christmas Carol” at Alliance

Am I the only person in Atlanta who has never seen the Alliance Theatre’s production of “A Christmas Carol,” in at least one of its incarnations? I always meant to see it, but year after year it was Christmastime at the movies, which left very little time — or inclination — to watch anything I didn’t have to.

And I’d actually been in “A Christmas Carol,” centuries ago, at the Actor’s Theatre of Louisville. I was one of those hapless extras wandering around in the background, warming our hands on non-existent coal fires or singing along on the easier carols. I think I had one line, something immortal like, “Hurray for Mr. Scrooge!” which indicates to me that at least I was around till the end.

Turns out, the Alliance version is essentially about one thing. Or rather, one performance: Chris Kayser’s phenomenal Ebenezer Scrooge. I’ve been a Kayser fan since he made his debut (I’m almost certain it was) in the one-act “Bleacher Bums,” directed by former Alliance artistic director Kent Stephens. And I’ve seen him in numerous other pieces, from the entire rep at Georgia Shakespeare to last year’s stunning “Eurydice,” directed by Richard Garner at the Alliance. He is the heart and soul of this “A Christmas Carol” production, and I don’t care if he’s done it dozens of times before.

Perhaps that’s why the second act is stronger than the first. Besides harrumphing and grimacing, Kayser hasn’t much to do once the Ghost of Christmas Past (a beautiful but bland Courtney Patterson) arrives. Perhaps it’s the too-literal translation provided by David Bell. Or the fact they were facing a long haul of a four-performance weekend. At any rate, everyone seemed a little tired. A little on automatic.

Bart Hansard as the Ghost of Christmas Present. (All photos by Greg Mooney)

And I kept waiting for some use to be made of the inventively cluttered stage (identified in the program as cast-off furniture, clothes and what-nots from foreclosures, a timely note.) But everything picked up in the second act, from Bart Hansard’s festive Ghost of Christmas Present to the fragile touching fade-out — an embrace between Tiny Tim (cute Royce Mann) and the expert Kayser, that could bring a smile (or a tear) from even the most jaded “Carol” goer.

At center, Neal A. Ghant as the ever-optimistic Bob Cratchit.

As the ensemble grew into the spirit of the show, you began to appreciate how talented they are: Bernardine Mitchell and that great big voice; Neal A. Ghant as the ever-patient and optimistic Bob Cratchit; even enthusiastic understudy Derek Manson as Scrooge’s ebullient nephew. And so many others. Not a real clunker in the group, which I credit a good deal to the good eye of director Rosemary Newcott. The Alliance’s “A Christmas Carol” may rightly be regarded by insiders as the theatre’s annual Cash Cow, but close your eyes a little, picture some sparkling antlers and this perennial Cash Cow can be as magical as all the those eight tiny reindeer put together.