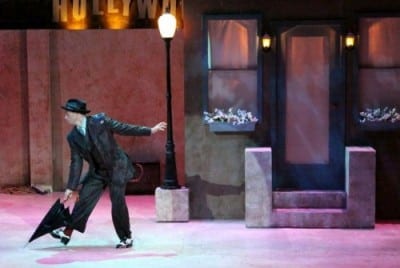 Aurora’s joyous “Singin’ in the Rain,” almost perfect without breaking a sweat

The heck with Hamlet. An actor looking for a real challenge should turn to Don Lockwood. Not exactly a well-known name to even true theater buffs, Don is the dancin’ fool brought to life by Gene Kelly in the classic 1952 movie musical “Singin’ in the Rain.”

So when Justin Tanner steps on stage in Aurora Theatre’s thoroughly enjoyable new production of “Singin’ in the Rain” — playing through September 5 — he not only has to perform a lengthy soft shoe on what looks like a dangerously wet stage, he has to make us believe that he isn’t just a Gene Kelly substitute. And he has to do it all with an air of amused insouciance, without breaking a sweat, and do it perfectly in just one take. (Contrary to urban legend, Kelly didn’t do the scene in one take; he took two days.) 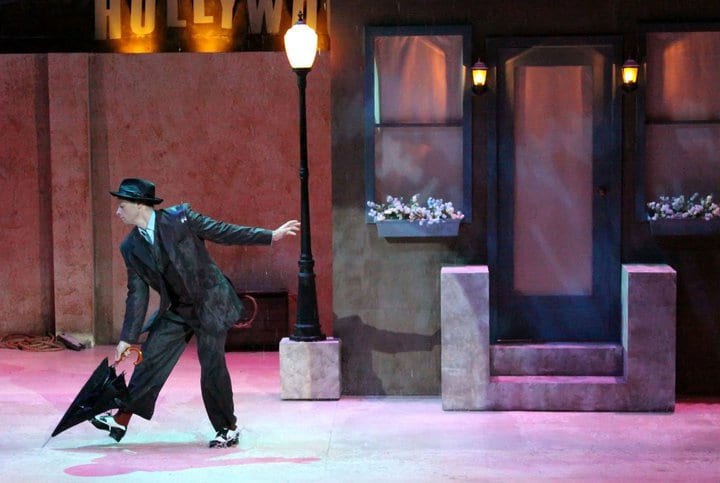 I’m not sure anyone can make us forget Kelly, but it’s a sign of how much fun Tanner and the whole Aurora bunch can deliver that we spend so much time with our focus on the play, rather than comparing the play to the movie. Face it, a community theater is not going to surpass the best movie musical ever made — that’s not just my opinion, but the “official” imprimatur of the American Film Insitute. But I guarantee that this “Singin’” has more verve and ebullience than some national musical tours that play the Fox Theatre and charge twice the ticket price. (Photos by Kenneth Mucke.) 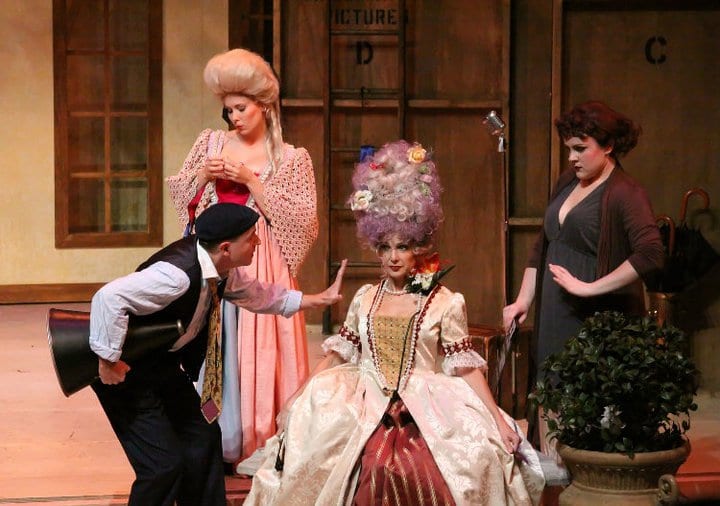 A brief recap for those who know the Kelly-in-the-rain scene but have gotten a little hazy about the plot. It’s 1927, and talking pictures are displacing silent movies. This is a major problem for Lina Lamont (Pamela Gold, seated above), who’s a major movie star with a shrill voice that makes a dental drill seem soothing. She’s partnered professionally (and in her deluded mind, romantically) with Lockwood, but he meets and falls for Kathy Selden (Leslie Bellair, playing the Debbie Reynolds role), who is unknown in Hollywood but can sing like a dream. Rounding out the major players is Cosmo (Jeremy Wood in the Donald O’Connor role, below), Don’s best friend and source of comic relief. 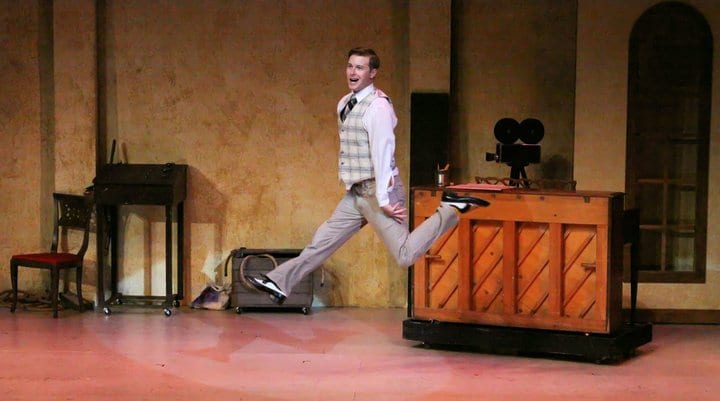 The book, by the esteemed Betty Comden and Adolph Green, feels a bit creaky; I was the only person in a sold-out crowd who laughed at the Calvin Coolidge joke. 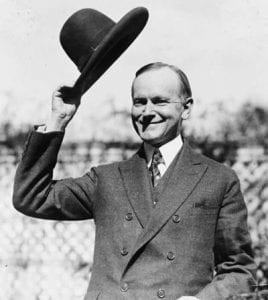 But the musical numbers hold up extremely well, even the ones that take place on a dry stage: Don and Cosmo having a blast on “Fit as a Fiddle (and Ready for Love)” and “Moses Supposes,” Don wooing Kathy on a ladder in the classic “You Were Meant for Me,” and of course Cosmo explaining the showbiz need to “Make ‘Em Laugh,” the movie’s second-most-famous number.

Wood just lights up the stage every time he’s on, and when he does O’Connor’s bit of running up a wall and doing a back flip, it’s more than just a cool stunt; it’s a sign of how ambitious this production is. Much of the choreography is straight from the source, meaning there are some tough steps here. Again, Aurora’s ambition, and how well they pull it off, is impressive across the board in this “Singin’ in the Rain.”