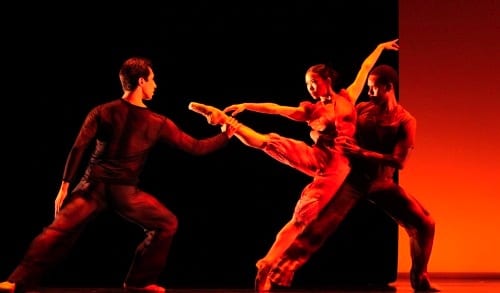 The year in review: Dance moves into spotlight with innovation, boldness and passion

With public enthusiasm up and artists undaunted by a precarious economy, 2011 was a momentous year for dance in Atlanta. Companies and presenters launched bold new programming initiatives, bringing innovative and substantial repertoire to the city. There were adventurous collaborations and fresh, original works from troupes of all sizes, in a breadth of diversity that’s aptly Atlantan. Many of the year’s new dance works sought inspiration in local history, culture or architecture, and the results reflected facets of the city’s evolving identity.

Dancers P. Gamino, T. Lee and D. Hansel in Atlanta Ballet's "Home in 7," which captured moments in the city's history and culture. (Photo by Charlie McCullers)

Whether fueled by patronage or pure passion, dance thrived. In February, Atlanta Ballet announced repertoire by several major internationally noted choreographers and co-commissioned Twyla Tharp’s “The Princess and the Goblin,” set for a premiere in February 2012. The Ferst Center for the Arts capped its first ARTech residency program with a U.S. premiere by choreographer and media artist Jonah Bokaer. In July, the Rialto Center for the Arts announced its ambitious, weeklong “Off the EDGE” series of community-based arts initiatives, which is set to take place in January with contemporary works by seven nationally and internationally known choreographers as its focus.

Dance-maker Lauri Stallings’ collaborative performance platform gloATL gave its first performance at the Goat Farm’s Goodson Yard in February and established the century-old warehouse as its new home in April. Its settling there helped make the Goat Farm artists’ community one of the city’s trendy new centers of creativity.

Public arts initiatives proliferated. Art on the BeltLine, Elevate: Art Above Underground and Flux Projects presented site-specific performances by about a dozen local troupes, inviting audiences to experience the city’s public spaces in new ways. With dance increasingly in the spotlight, and with an eye on its audiences, the Atlanta Contemporary Art Center added dance to its programming initiatives with performances by Dance Truck, Gardenhouse Dance and gloATL.

Dance Truck expanded its grass-roots mission of “bringing dance to the people.” What began as small-scale performances inside a truck grew to the grand scale, community-building “PLOT” at the Goat Farm in July. Also in the summer, Dance Truck Artistic Director Malina Rodriguez co-founded The Lucky Penny with choreographer Blake Beckham. This presenting organization, aimed at fostering collaboration among experimental artists both here and elsewhere, staged its first event in November.

All told, more than 50 professional dance performances filled the 2011 Atlanta calendar. Here are a few standouts, listed chronologically. All were locally produced and reflected something unique toward giving the city a sense of identity and advancing the artistic progress of dance here.

“Flyin’ West.” In March, Ballethnic Dance Company presented an adaptation of Pearl Cleage’s play of the same title for the ballet stage. Set in Nicodemus, Kansas, in the 1890s, the new, full-length ballet brought a piece of American history — the migration of African-Americans from the American South to the West — to new audiences.

“Home in 7.” Atlanta Ballet has a history of teaming up with musical artists from the Southeastern region. Created by choreographer Amy Seiwert, spoken-word artist Marc Bamuthi Joseph and violinist-composer Daniel Bernard Roumain, this May premiere was one of Atlanta Ballet’s most synergistic collaborations in recent years. Joseph’s poetry, inspired by his years as a college student in Atlanta, overlay images, memories and dreams. These merged with the tensions of Seiwert’s sculpted, architectural style, to Roumain’s soulful strains on electronic violin. The work brought forward aspects of the city’s history and culture — from the Atlanta Braves to Southern belles, through tragedy into triumph — and captured its ephemeral but indomitable spirit.

“Liquid Culture.” If gloATL’s “Chapter III” dug into deeper, more personal sources of expression, its four-part “Liquid Culture” in the summer branched farther out into the city’s public spaces. The series of performance installations — at Sol LeWitt’s “54 Columns” in Freedom Park, the Lindbergh MARTA station, Little Five Points and the intersection of 15th and Peachtree Streets — heightened the effects of these urban spaces (enchanting, whimsical, uncomfortable, dangerous) on the people who passed through them. The results were meaningful aesthetic experiences between performers and audiences, shaped by Stallings’ choreography and the city’s architecture.

“Maá.” The second full performance of Kaija Saarhiaho’s ballet since its 1991 premiere brought more firsts for gloATL. “Maá” was gloATL’s Symphony Hall debut and its first collaboration with Atlanta Symphony Orchestra conductor Robert Spano. The evening-length work, performed by Sonic Generator, reconfigured the concert hall as an in-the-round performance space: video projections surrounded a stage partly covered with turf. It seemed of the caliber of work seen in major cities — the Brooklyn Academy of Music comes to mind — but the artists and concert hall were unique to Atlanta. Stallings’ movement language, coming from deeply rooted, angular postures, recalled archaic sculpture and seemed to evoke ancient mysteries. As images of ocean swells engulfed audience, dancers, musicians and Spano, it became clear that the essence of life is in rhythmic movement.