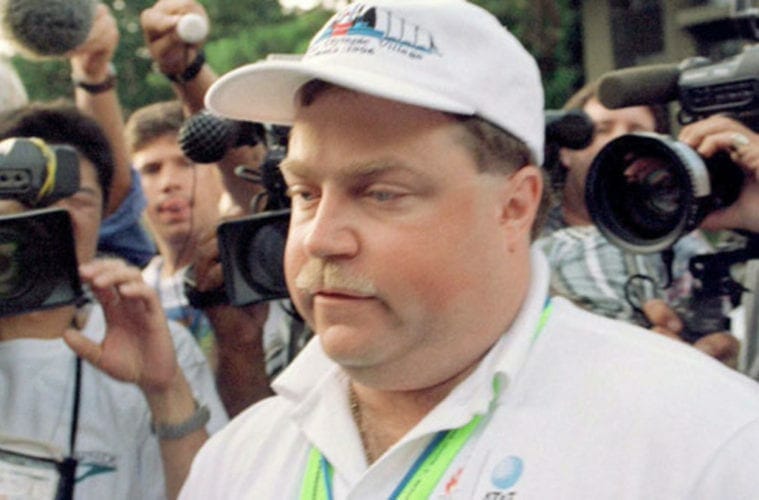 Richard Jewell wades through reporters after he was named the suspect in the 1996 bombing of Centennial Olympic Park.

In many ways, Richard Jewell was the first victim of the modern media age.

Jewell, the security guard who discovered a bomb-containing backpack at Centennial Olympic Park during the 1996 Summer Games, went from hero to suspect in the blink of an eye.

“A guy who deserves a statue in the center of Atlanta is vilified,” says Kevin Salwen, coauthor of a new book on the bombing, written with former U.S. Attorney Kent Alexander. “Scores of people who owe their lives to him. I always wondered how this went so horribly wrong.”

The Suspect, new from Abrams Press, delves deeply into the 1996 bombing and how things went so wrong. It shows Jewell as a legitimate hero who likely saved dozens of lives when he discovered the bomb before it went off and led people away from danger. Shortly after the bombing, however, a law enforcement official leaked to the Atlanta Journal-Constitution police reporter Kathy Scruggs that Jewell had become the FBI’s suspect. The paper broke the story, and, for the next three months, Jewell faced the kind of media frenzy and law-enforcement scrutiny few have ever endured.

“This was a pre-social media news story that was a social media story,” says Salwen, a former Wall Street Journal reporter and editor who ran the paper’s Southeastern section during the Olympic Games. “If any message comes out of the book, if people had slowed down — both journalists and the public in their appetite, we’ll be more accurate. Trading speed for accuracy can be dangerous.”

Alexander, who was deeply involved in the bombing investigation as U.S. Attorney for Georgia’s northern district, says a lesson for law enforcement is to never leak a suspect’s name. “There’s a human toll,” Alexander says. “There were two major suspects before Richard Jewell, and their names never got released. There were a lot of reasons for the FBI to look at Richard Jewell, but there was no reason for his name to be out there.”

The bombing is also the subject of Richard Jewell, a film directed by Clint Eastwood due out December 13. Alexander and Salwen acted as consultants.

The authors will speak about the book Tuesday night at the Atlanta History Center, along with former AJC Managing Editor Bert Roughton. Former WSB-TV anchor John Pruitt will moderate.

The book takes an evenhanded and in-depth look at one of the most seismic events in Atlanta history. As thousands were crowded inside Centennial Olympic Park in the early morning of July 27, a right-wing extremist named Eric Robert Rudolph placed a backpack that contained pipe bombs and nails for projectiles beneath a bench by the sound tower for the AT&T stage. The bomb exploded at 1:20 a.m., about 10 minutes after Jewell discovered it. Two people were killed and 111 injured. Kent Alexander (left) and Kevin Salwen, coauthors of “The Suspect”

At the time, there were 15,000 accredited journalists in town to cover the Olympic Games. And besides that, the media landscape was beginning to transform. “It was a petri dish for something that was very much like today’s media,” says Salwen. “Fox News had just started. MSNBC had just started. The New York Times and Wall Street Journal went online for the first time. The pace of the media accelerated dramatically. It was very much a perfect storm. In today’s environment, that storm is repeated every day, and then the world moves on to the next thing. Except the person in the crosshairs of yesterday’s story, their lives are left in shambles.”

For the Atlanta Games, that person was Richard Jewell.

The book offers a definitive look into what happened behind the scenes at both the local FBI office and at the AJC. The Suspect reveals for the first time the surprising source who told Scruggs that Jewell was under investigation.

The AJC‘s coverage of Jewell was intensely debated in journalistic circles; the paper has vigorously defended its actions, while others have criticized it for putting Jewell’s name on the front page in a banner headline. The media all but declared that the FBI had its man in Jewell.

The FBI also took substantial criticism for the tactics it used with Jewell, including tailing him with a caravan of vehicles (and an airplane at least once) every time he went to the grocery store or to a Braves game. But the book draws no conclusions on who’s to bless and who’s to blame. “We decided not to moralize, just lay out the story and let people make their own conclusions,” says Salwen. “There’s a lot of gray in this story.”

In many ways, there were two delayed casualties of the bombing: Jewell and Scruggs.

The reporter died in 2001 at age 42 after struggles with alcohol and drugs. “The initial piece Kathy wrote was accurate,” says Salwen. “Kathy ends up being in the crosshairs of Jewell’s lawyers, her colleagues and other media. Her life from that point on is a tragedy.”

Jewell received several lucrative settlements from media outlets, although he unsuccessfully sued the AJC. But “former suspect” supplanted “hero” as the adjective that always accompanied any mention of his name. He eventually got back into law enforcement and settled in as a Meriwether County deputy sheriff.

Each year, on the anniversary of the bombing, he would quietly go to Centennial Park and lay a rose and a card on the spot where Alice Hawthorne was killed by shrapnel from the explosion.

Salwen says Jewell suffered from PTSD in the aftermath of his ordeal and would often wake up with night sweats. He died in 2007 at age 44 suffering from heart disease and diabetes.

One thing is not gray in this story: Richard Jewell was a hero. With the book and the film, that point may finally sink in with the general public. “That’s part of the point of the book,” says Alexander. “That’s part of the intent. We hope he gets his due; it’s just a shame that it’s coming so late.”