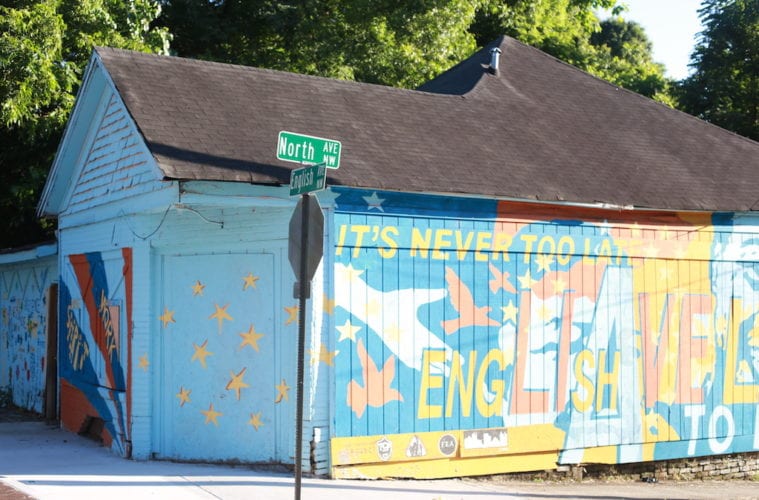 Two years ago, while a Super Bowl-ready $1.5 billion replacement to the Georgia Dome, complete with a 64,000-foot HD halo screen and retractable camera-lens roof, was under construction, streets lined with neglected, boarded-up houses sat just a few blocks away. This is the disparity that director Camille Pendley explores in the documentary The Home Team, screening Wednesday, May 15, at 7 p.m. at Mother Bar in Edgewood. The film centralizes English Avenue and Vine City, neighborhoods adjacent to the Mercedes-Benz Stadium. Historical hubs of civil rights activity and industry, over the past few decades, these neighborhoods have suffered foreclosures, vacancies and disinvestment from the city.

In the 45-minute film, produced by Tracy Bates of the Historic Westside Cultural Arts Council and codirected by Laura Asherman, longtime English Avenue and Vine City residents pose thoughtful questions about the stadium and the development it brings along with it — namely, when will we see the promised benefits of the stadium here in our neighborhoods?

The Home Team follows residents expressing their concerns about issues in their community, a place now desirable due to its proximity to the stadium. They talk of long-standing issues of homelessness and illegal drug activity, and current issues of increasing housing instability as neighbors witness private development’s impact on rising rents and taxes. The film explores, in part, the stories of residents and their loved ones as they struggle to stay put in the communities they call home.

“The houses that are being renovated are not at an affordable rate for people who have lived here,” says Rosario Hernandez, who has lived in English Avenue for over a decade. “Where are mommies with kids supposed to go?”

“That’s where gentrification comes in,” she says. “We feel like some folks are being pushed out just because they can’t afford to stay.”

The Home Team also paints a nuanced picture of the philanthropic investments of groups including the Arthur Blank Foundation in these neighborhoods. The film shows Blank Foundation senior vice president Frank Fernandez expressing hope and determination about change while doing outreach in the neighborhoods, though residents’ feelings about these projects range from hopeful to untrusting.

“There’s still doubt,” says Hernandez, “because we have not seen true progress.”

Pendley’s film tells another story as well — one of legal injustice.

The Mercedes-Benz Stadium has been exempt from paying any property taxes from day one, and attorney Wayne Kendall’s lawsuit on behalf of residents against the Fulton County Board of Assessors claims that this amounts to millions of dollars each year that should be going to the schools, city and county. The Home Team makes visible the stark disparity between the stadium and the communities currently not benefiting from the money it’s generating.

“That prioritization behind the scenes meant that the city was getting less for its infrastructure, and giving that break to the Falcons and stadium entities,” says Pendley. “It was essentially a prioritization of business over people.” It was important for the filmmaking team, working with the Westside Cultural Arts Council, to build on knowledge already existing in English Avenue and Vine City.

“I don’t think you can make a good documentary without going through people who know more than you,” says Pendley, who grew up in Atlanta and studied at Georgia Tech but only went to English Avenue and Vine City when reporting assignments first brought her there in 2015. As a freelancer working on multiple projects while creating the film, Pendley says she had to balance time efficiency with the necessary work of relationship-building.

The Home Team screening this week is part of a collaboration with the Housing Justice League. It’s the final film in the organization’s film series, which has focused on educating the public about housing issues and gentrification nationally and on providing discussion space locally for community-building after each screening.

“This film is a vehicle for conversation around something complex,” Pendley says.

The Housing Justice League’s member-led work has long fought for community decision-making power and benefits for multiple large development projects in Atlanta, including Turner Field and the BeltLine.

“It is essential to our work that we amplify the destructive development projects that enter communities,” says Alison Johnson, executive director of the Housing Justice League. “We see these types of projects as wealth extraction from communities. And it’s time our leaders protect residents better.”

The Housing Justice League also focuses on educating tenants about their rights in the face of evictions, an issue that The Home Team shows is becoming more pressing for many longtime Vine City and English Avenue residents.

“We are hoping that people will learn more about their tenant rights,” says Johnson, “and begin to activate their rights and be able to remain in their homes without being bullied out.”

As the film series has shown, the pattern of large public-private development deals in historically underserved communities is a national one. Previous films in the series have focused on similar issues in Oregon and California, and this national connection is important to The Home Team’s filmmakers too.

“Cities around the country are making decisions every day about their priorities,” says Pendley. “Are governments covering basic needs for people before going out to accomplish something that’s state of the art?”