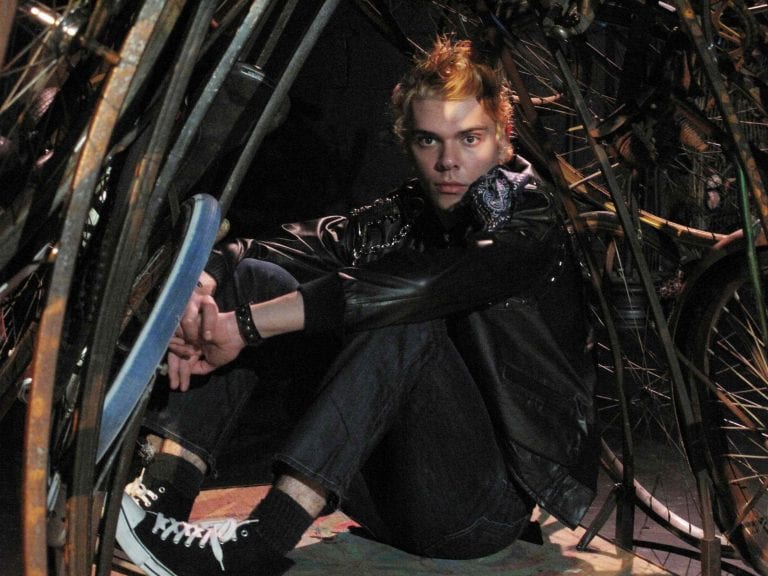 When asked how his relationship with world-renowned Georgia folk artist Howard Finster became the subject of a play, Robert Sherer gives a simple answer: “I was tricked.”

The world premiere of “Hidden Man” by Pamela Turner and Russell Blackmon, opening Friday, March 9, at 7 Stages, tells the true story of the unlikely friendship that developed in the early 1980s between Sherer, then a young, gay, nihilistic punk from Atlanta, and Finster, a visionary, conservative Baptist preacher turned folk artist who lived in Summerville in North Georgia.

Shortly after Finster died in 2001, Blackmon introduced himself to Sherer at an art opening one evening. He said he was researching Finster’s life and asked Sherer whether they could talk. That began a two-year period of interviews. “He would come over with some bottles of wine, and I would tell my stories into his little dictaphone,” Sherer recalls. “I got more and more comfortable with him and told him about a lot of the difficult things that were going on in my life then. I poured my guts out.”

Finally Blackmon mentioned that he thought there was a stage play in Sherer’s stories. Sherer fought the idea, but Blackmon and his collaborator, playwright Pamela Turner, wouldn’t drop it. Over a period of several months, they slowly got Sherer more comfortable with the idea of his life becoming the subject of a drama, even though it covers a deeply personal and troubled period.

Sherer grew up in rural northern Alabama. His unusually progressive parents recognized his artistic talent early and also recognized that the troubled young man would never be happy in the fundamentally religious small town where they lived. As confirmed atheists and agnostics, they were commonly thought of as “the family that was going to hell.” An aunt who lived in Atlanta took Sherer to a career and portfolio day at the Atlanta College of Art, where the talented young artist was invited to attend under a Ford Foundation scholarship.

Sherer entered a rebellious phase as he explored Alanta’s burgeoning punk and gay scene. “This was the beginning of the AIDS crisis, and I was a wild street child,” he recalls. “I was nihilistic, even suicidal, at the time. I was mad at the world. Many in my core group of friends committed suicide, and there was almost a challenge in it.”

One afternoon, an art-collecting friend took Sherer along for the ride up to Finster’s home in Summerville. Finster was beginning to develop substantial renown on the international art scene. REM had used one of his pieces for an album cover, and he was in the process of building his folk art Paradise Gardens on the grounds of his property. To everyone’s surprise, the gay street punk and the fundamentalist Southern preacher really hit it off.

“Howard and I, we were just instant friends,” says Sherer. “I felt like I’d known him my entire life. We plugged so deeply into each other’s brains, we ignored the people around us for the rest of the day. I spent that day just walking the grounds with him and talking. We’d just start telling crazy stories about things.”

Sherer began a period of regular visits with Finster during which he would stay at Paradise Gardens, helping him with whatever needed to be done around the property. The action of the new play covers this four-year period, moving between Sherer’s life in Atlanta and Finster’s four-acre folk art park in the mountains.

They found that they had much in common: they were both raised on farms in northern Alabama. They were both raconteurs and both devoted artists. They both loved plants, and both were outsiders in their own ways. Days were spent doing “whatever Howard wanted to do” with no real structure, anything from helping Finster plant, mow or build in his elaborate garden to jumping into the truck to pick up an unwanted 50-gallon drum full of thimbles that Finster thought he could use in his work.

“I did learn a great deal about how to handle artistic fame,” says Sherer. “By the time I was going up there, Howard was well on his way to becoming a famous artist. He’d been on Johnny Carson. People were talking about him all over the country. He was really starting to be hit with all that.”

Although they talked a lot about Finster’s faith, Sherer, raised as an atheist, remained a decided nonbeliever. “He would argue with me a lot about it,” Sherer remembers. “He was fearful I was going to go to hell. One afternoon there was a bad thunderstorm. He made me really angry, and I went stomping away. I stood underneath a big tree smoking a cigarette. He really freaked out over that. I think he was so Old Testament that he thought that if God was going to strike me, that would be a good time and place to do it. ”

But Sherer says that, ultimately, every day he spent with Finster was one fewer day for him to do drugs or engage in other unsafe behavior. “I would have died if I hadn’t had that as an escape,” he declares. “He policed me heavily. He would not even allow me to curse in front of him. I was a dark, gloomy goth kid. I wanted to stay there, and he wouldn’t let me.”

Although Sherer was an out and proud “in-your-face gay activist” in Atlanta, he says, it was a subject he didn’t broach with Finster, out of fear that he’d be rejected. Much of the action of the play revolves around Finster’s discovery of Sherer’s homosexuality and how it forced the older man to confront his feelings and prejudices.

Eventually Sherer finished his BFA degree at ACA, and he applied and was accepted to the prestigious Rhode Island School of Design for graduate school. The two continued communicating in letters and on the phone, but the communication slowly dropped off as Sherer finished grad school and went on to pursue his own successful career as an artist in Philadelphia and New York. Finster reached incredible levels of fame and when he died was widely considered one of the most significant folk artists of the 20th century.

Sherer’s art, which deals with the subjects of feminism and sexuality in Western art, has long been the subject of censure from the Christian right, starting with his very first show in graduate school.

The play itself has even become the subject of a bit of controversy. Various news outlets have reported that two of Finster’s fundamentalist daughters are unhappy about the play, even though they haven’t seen or read it. And they attack Sherer’s art as pedophilic gay pornography.

It’s the lessons that Finster passed down about how to be an artist and how to handle fame that help him in such times. It was a mentoring relationship that Sherer, now a professor of art at Kennesaw State University, now even finds himself re-creating with his own young students.

“We have an entire generation being raised by their mothers and their fathers are largely absent,” Sherer says. “And of course having been one of them, I’m equipped to know how to handle that. I know how to let them have a sense of autonomy and be rebels. But I’ll stop them if they’re doing something as nihilistic as I was doing when Howard finally yanked me up.”

In the end, the process of letting his own experience become the subject of a play was a process of learning to relinquish control. The first time Sherer saw a reading, at a Buckhead gallery, he was uncontrollably crying by the end and wanted to slip out the back door without speaking to anyone. His partner stopped him and told him to look around.

“Nearly everyone in the room was crying, too,” Sherer says. “I realized I don’t need to have any sense of ownership in this. It’s a play; it needs to have its own life.”