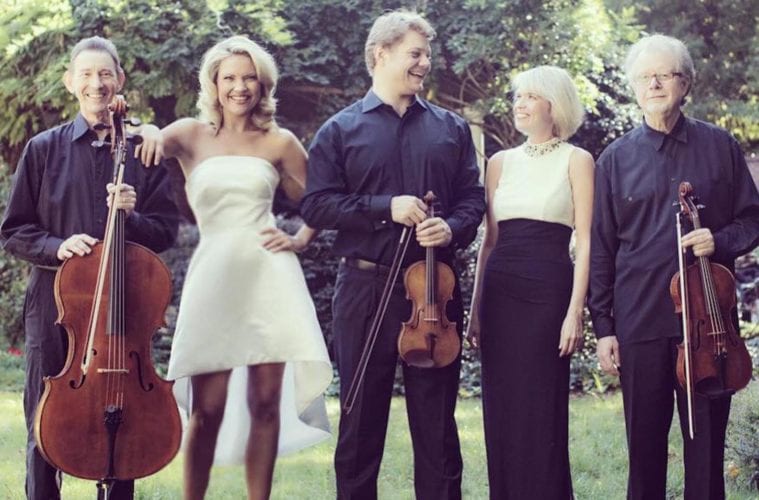 The vibrant music of Czech composers Bedřich Smetana and Antonin Dvořák was the order of the day in Sunday’s concert by the Georgian Chamber Players at Trinity Presbyterian Church in Northwest Atlanta. The music of the pair exuded strong romantic-era feelings for Czech cultural identity and fervent love of their homeland, incorporating elements of folk songs within fully developed classical forms.

The program opened with Smetana’s Piano Trio in G-minor, Op. 15, performed by violinist David Coucheron, pianist Julie Coucheron and cellist Christopher Rex. The overall tone of this early trio is tragic and elegiac, composed following the death of Smetana’s four-year-old daughter Bedřiška, fondly known as Fritzi, who succumbed to scarlet fever. While it feels greatly reminiscent of the chamber music of Robert Schumann, Piano Trio in G-minor, Op. 15, is also the first chamber work to display Smetana’s full potential and personal creative voice.

In contrast, pianists Elizabeth Pridgen and Julie Coucheron followed with several selections from the spritely Slavonic Dances for piano played with four hands, by Dvořák. The composer wrote two sets of Slavonic Dances, Op. 46 and Op. 72, and the pianists drew from both works for this concert. Emulating the Hungarian Dances of Johannes Brahms, Dvořák produced lively music that is immediately redolent of the Moravian and Bohemian folk music of his native land.

Pridgen and Coucheron have developed a fine reputation through performances, and their playing of the selected dances continued to prove their prowess of the four-handed piano. They opened the set with a cheerful and exuberant furiant — a fast Bohemian dance of shifting meters and rhythmic accents — and another to close, both from the Op. 46 group (Nos. 1 and 8), with a more graceful “dumka” (or “starodávný”) in between — No. 2 from the Op. 72 group.

The program closed with another work by Dvořák titled String Quintet No. 2, often referred to as “Bass Quintet.” Rather than use the typical second viola or second cello, the composer added a contrabass to the standard string quartet to create his quintet of players. This allowed for a deeper, richer spectrum while freeing the cello to take more frequent advantage of its higher, tenor-range lyrical capabilities. The result is a rich, impressively broad sound coming from a handful of string players.