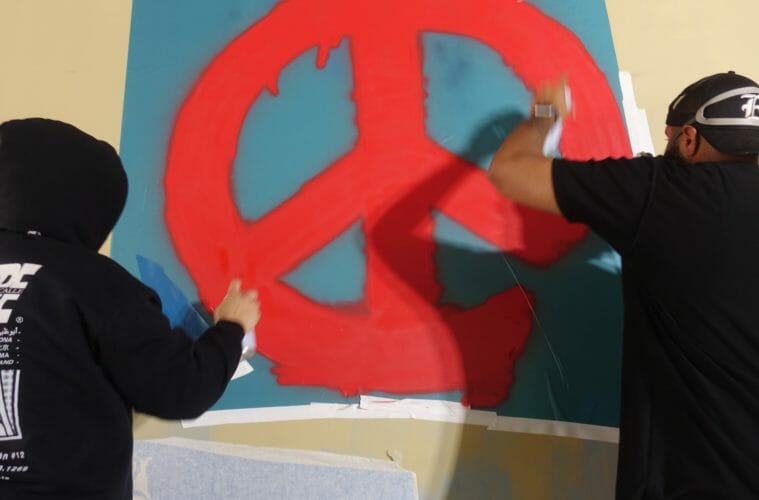 “The Art of Banksy: Without Limits” makes North American debut in Atlanta

How do you curate a show about the world’s most well-known, unknown street artist Banksy when many of his now-famous street murals no longer exist? You recreate them. That’s what Guillermo S. Quintana (he goes by “Guillermo”) has done for The Art of Banksy: “Without Limits,” which makes its North American debut September 3 at Underground Atlanta. “This exhibit recreates the actual feeling of standing in front of Banksy’s murals in the streets of London or New York,” says Guillermo, the exhibit’s trans-disciplinary creator and exhibition designer. The show was originally booked at the Westside Cultural Arts Center but sold so many tickets so quickly (3,000 in 20 minutes, the organizers say) they moved it to Underground, a bigger venue. Tickets start at $29.20.

What you will see

More than 150 Banksy artworks, including certified originals, prints, photos, digital installations, sculptures and 23 murals, each carefully recreated by street artists, three of them local (more about them later). You’ll also encounter the gates of Dismaland, Banksy’s 2015 dark parody of Disneyland, and learn about the Louise Michel, a boat he funded to rescue migrants in the Mediterranean Sea. You’ll see prints and sculptures from the Walled-off Hotel, Banksy’s protest hotel/museum/gift shop, located right next to the controversial barrier wall separating Israel from the Palestinian territories. 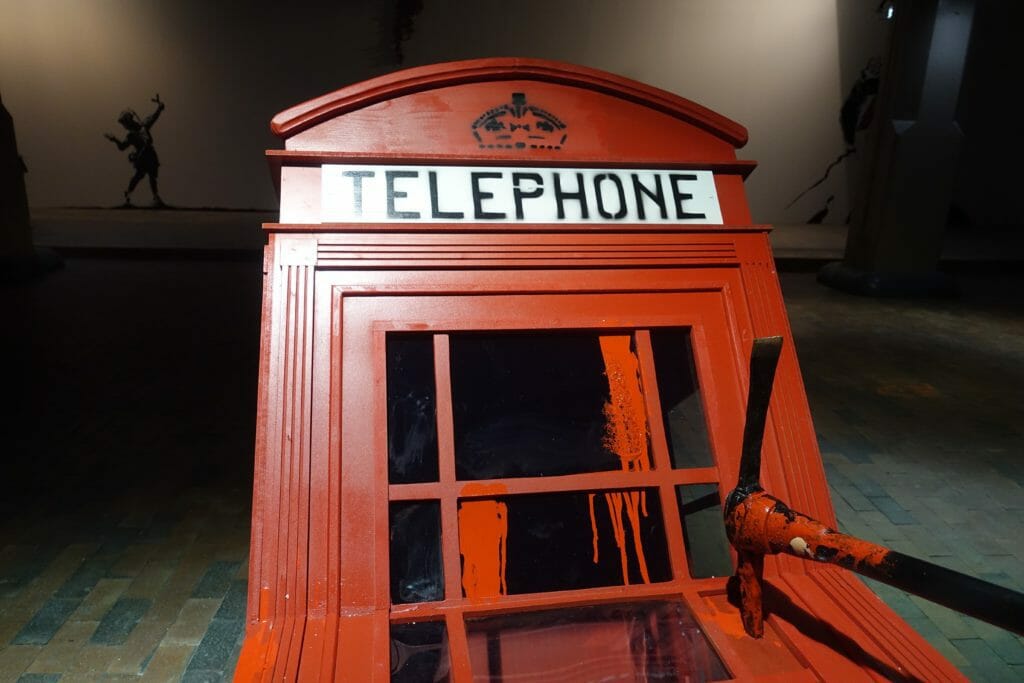 Bad boy Banksy gives the finger — and a pickaxe — to a familiar and cherished item in “Death of a Phone Booth:”

Who is Banksy anyway?

Part of the thrill of Banksy, aside from his provocative art, is his anonymity, although there’s plenty of speculation about his identity: He’s commonly believed to be artist Robin Gunningham, from Bristol, England. Or maybe he’s Robert Del Naja (aka 3D), of the trip-hop band Massive Attack. And was it Banksy himself who sold his canvases for $60 apiece on the streets of New York one day in 2013? Maybe, maybe not. (Few people bought them, believing them to be fake.)

Banksy started as a graffiti writer in England in the 1990s, transformed into a street artist and political activist and then into a financially successful artist who loves to prank the elite art world: In 2018, his “Girl with Balloon” sold for $1.37 million at a Sotheby’s auction in London. Immediately after the sale, in the packed auction room, a buzzer sounded and the work slowly slipped through a shredder hidden in the frame, destroying the bottom half. (Banksy apparently intended the entire work to be shredded, but the frame malfunctioned, he says in his video.) Adding another layer of intrigue and excitement to the story, the artwork will be auctioned again by Sotheby’s London, on October 14. Renamed “Love is in the Bin,” it now carries a minimum estimate of $5.5 million.

Using humor, satire, skillfully applied discomfort and an easily understood visual vocabulary, his art often gives the finger to authoritarianism, capitalism and the art world itself. His 2015 documentary (or prankumentary?), Exit Through the Gift Shop: A Banksy Film, was nominated for an Academy Award.

“Each exhibition in each city is totally different,” says Guillermo, who became involved in this touring Banksy exhibit (there are others) in Berlin. The three Atlanta artists he brought on to recreate the murals at Underground — Big Papito, Elprez, and Spraykid — painted or stenciled about four a day leading up to the opening. The artists, including Desastre and another anonymous street artist from Mexico, worked as a team and each mural took about four hours to complete. 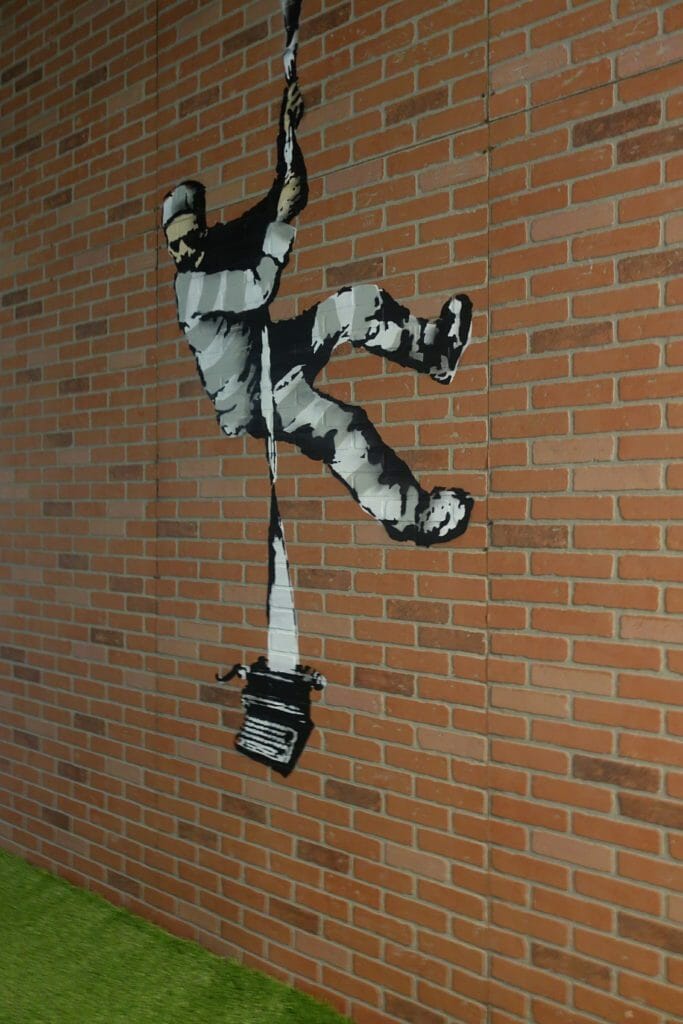 The Banksy murals are recreated on the same kind of wall as the artist’s originals. Here is “Escape” at Underground.

Big Papito explains the process: “We’re doing stencil work, spray painting, touching up, prepping everything, pretty much from setting up the first basic color, setting the walls up, unpeeling the stencil, recreating many of Banksy’s notable works, trying to get it as precise as possible,” right down to drips of paint.

In his non-Banksy life, Big Papito takes a hybrid approach to street art by hanging his canvases on a public wall. His work is joyful, colorful, abstract. “I don’t really try to stay in the border,” he says. “I try to create a scene, an idealistic scene that will take you somewhere if you look at the artwork.” For this exhibit, however, his work had to stay within the lines of the Banksy recreations. “We did [Bansky’s] robot the other day,” he said.

Banksy has “completely” impacted my art, Elprez says. “He’s influenced how I operate my business as an artist.” To the fine-art world, he is Timothy Scott DeGroot; in underground/sticker culture he is GhostKing OG; to graffiti writers, CuspOne; and to everybody else he’s Elprez. He teaches kids street art through an after-school youth camp ministry in his home neighborhood of Bankhead. His motto for his students is “Thinking outside the box to get outside the hood.” He also teaches his kids how to sell their work, something Banksy has certainly figured out.

Another of the mural recreation artists was Darrius Ford, better known as Spraykid, a graffiti artist, apparel designer, graphic designer and art director. He is the founder of the Pryme Art Agency, which connects community artists with the global art scene. As creative director of CEO Millionaires, he was behind the Pink Trap House and Dabbing Santa, both created for rap artist 2 Chainz. The Pink Trap House was a tourist attraction on Howell Mill Road promoting the gold album “Pretty Girls Like Trap Music.” Sales of Dabbing Santa holiday sweaters generated more than $2 million in revenue.

How the exhibition came about

Kamal Gürkaynak, a Banksy enthusiast and collector, first exhibited the Art of Banksy in 2016 in Istanbul, followed by other European cities. Guillermo attended the exhibit in Berlin, felt that the museum-like presentation of the artwork was the antithesis of how Banksy delivers his works in the wild, knocked on a door marked “administration” and explained the discrepancy. After the initial “who the **** are you?” Guillermo persuaded the management to give him two days to fix it. He brought in local street artists to recreate the streets where Banksy actually paints and has been their artistic director ever since.

Exit through the gift shop (literally)

You’ll find the expected Banksy merchandise, and you can also create your own T-shirt or hoodie by stenciling images onto your unique garment. Two dollars from each sale will benefit the Louise Michel Foundation.