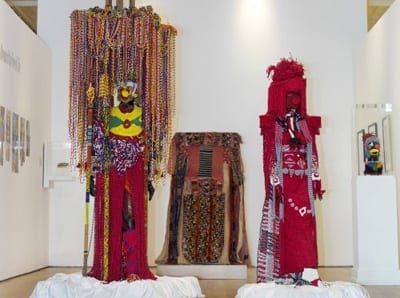 Clark Atlanta University Art Galleries’ display of its permanent collection offers the most comprehensive array of African-American art in town, including a goodly number of contemporary Georgia artists. Gallery Director Tina Dunkley reinstalled the collection in August, and if you haven’t seen it, now is a good time because you’ll also catch “King Seppy’s Dream of the Tree of Life.” 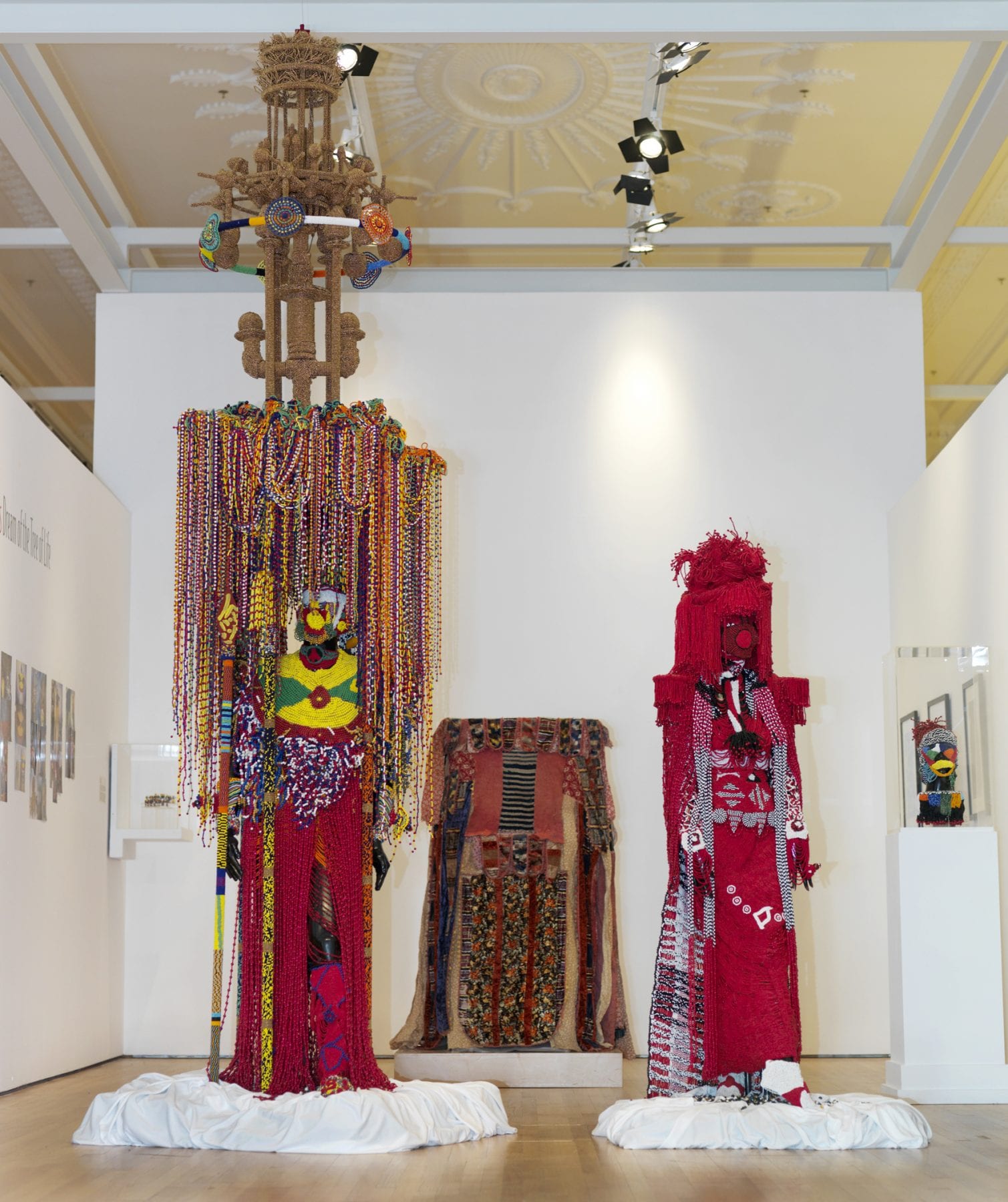 The creation of Thaddeus LaCrette, Seppy and his consort Queen Enid are resplendent life-size figures composed of 3 million multi-colored, multi-shaped, multi-textured beads manipulated into an eye-popping array of patterns. LaCrette, 62, is a tailor by trade, and it shows in the design of the garments and attention to detail. 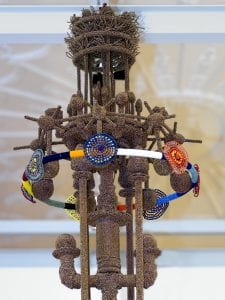 LaCrette’s imagination peaks, literally, in the architectural crown atop King Seppy’s head. Soaring 14 feet, it is constructed of plumbing pipes covered in gold beads and festooned with colorful emblems and a waterfall of beads hanging from its lower rim.

Inspired by the pictures he saw by chance in the book “Africa Adorned,” LaCrette strung beads maniacally for 12 years — first in Brooklyn, then in Atlanta, where he is a part-time resident — improvising the design and composition as he went. Atlantan Kiche Pree met him through a friend and brought him to Dunkley.

Thus, LaCrette joins the ranks of visionary self-taught artists. As with his peers, the thinking behind his works is as elaborate as their material incarnation. The symbolism and iconography reflect his syncretic faith, which melds Christianity and the spirit world. The crown, for example, represents the kingdom of heaven. He also offers subtle commentary on the history of his people, particularly those on the islands, such as his native Grenada. 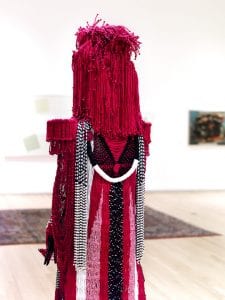 Those familiar with Robert Farris Thompson’s landmark book “Flash of the Spirit: African & Afro-American Art & Philosophy” will see in this work the DNA of Mother Africa brought to the Americas by its involuntary immigrants. Carol Thompson, curator of African art at the High Museum, surmises that Dinka corsets and Yoruba beadwork (examples of which you can see at the High), which would have been illustrated in “Africa Adorned,” were influences, as well as engungun masquerade costumes.

Dunkley suggests as much in a complementary exhibit, which includes an engungun costume and Eric Waters’ photos of African-American Mardi Gras celebrants in their elaborately beaded  attire. Contemporary artist Nick Cave’s fabulous costumes also come to mind as heir to the pageantry of African rites and aesthetic panache.

A small exhibition of recently acquired works by Felrath Hines stands at the other end of the spectrum. The late artist, who was chief conservator of the Hirshhorn Museum in Washington, came of age in the thick of the civil rights era and was involved in the struggle through the group Spiral, whose members included Romare Bearden and Hale Woodruff. Hines did not, however, perceive art through the prism of  identity politics. He held fast to his belief in a universal language, choosing to explore various modes of abstraction before settling into a hard-edge geometry leavened by subtle tweaks to shapes and their placement and often lyrical color.