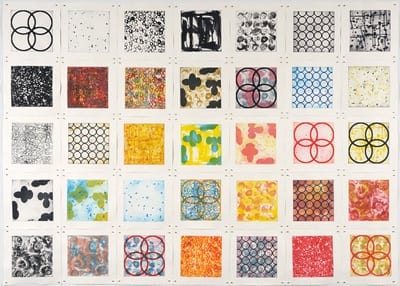 Terri Dilling’s “Assembly”: Finding art and the meaning of life in chemical evolution

In addition to celebrating photography this October, the Atlanta art community is celebrating — or at least examining — evolution.

The Fernbank Museum of Natural History’s “Selections” exhibition, in complement to its “Darwin” exhibit, features work solicited primarily from scientific illustrators asked to approach the subject of evolution from a fine-art perspective. (A review of that show will be posted on ArtsCriticATL soon.)

Meanwhile, Portal Gallery’s “Assembly” presents the artistic results of Terri Dilling’s seven-month position as visiting artist at the NSF/NASA Center for Chemical Evolution at Georgia Tech, the first part of an educational outreach by the center, which brings together scientists from all over the world to investigate the process by which simple molecules might give rise to the more complex structures that made the appearance of life possible.

Dilling and I corresponded recently regarding the nature of the residency and the exhibition. Jerry Cullum: You remark that the Center for Chemical Evolution’s work with the chemistry of complex molecules has given you new ideas about your own art practice’s interaction between order and randomness. How did all this play out in the artwork at Portal Gallery? One of the pieces is a grid of prints that contain similar elements.

Terri Dilling: I like to work with groupings or sequences in my art, because I like the way you can look at a component by itself and also as part of the bigger whole. The “Visual Chemistry” grid is made up of 35 different prints. I was thinking about scientific methodology and also about genetic information being passed along when I set up parameters for this grid. As you look along the rows or down the columns, each successive print inherits something from the one before — either the same plate being used or the same ink color. These “rules” set a structure but allow for tremendous diversity of image and pattern to emerge. It demonstrates something about how scientists work with variables, but I was also interested in just seeing what kind of visuals emerged artistically.

At the reception, someone pointed out that you could also read it like a data table, looking at the place where Row 4 and Column 5 intersect, for example. I hadn’t been thinking about it that way, but it is interesting. Sometimes in chemistry, when you mix A and B you get a resulting mix that contains A and B, but sometimes you get something totally different and unexpected.

JC: So all this is an attractive visual metaphor for chemical evolution?

TD: My goal is to perhaps provide an introduction to chemical evolution, to have a conversation. The work is not really a specific lesson, but rather an entrance for viewers to start looking and thinking in terms of molecules. For me, this tiny perspective always pulls back to a bigger view of what the whole universe is made of, what I am made of, and I find that meaningful.

JC: A work — should we call it collaborative? — in the show is a CCE wall placard analyzing the structure of one of your artworks.

TD: Mass spectrometry is a technology for investigating molecular information, and I was thrilled to work with Rachel Bennett at Georgia Tech to look at a few of my print samples this way. I see the resulting science poster as part of the conversation, showing a way that scientists look at things and analyze information.

JC: I understand that another work in the exhibition is based on a quotation from Darwin.

TD: Darwin researched the origin of the species, stemming from a common ancestor, but as I understand it, not really so much about the origin of life — how non-living matter became living. So I think CCE scientists are looking back further. However, there is a well-known quote where Darwin muses that life may have emerged from a “warm little pond.” This was a starting point for me, imagining a little pond teeming with particles and chemicals, forming new combinations and clusters, and three paintings came out of this.

JC: The center has plans for bringing in visiting artists not just from visual art but from dance, music and theater. You also plan to continue working with the center on visual art projects. How?

TD: I’m developing a project for next year that includes a multi-artist print portfolio and also some artistic collaboration for an installation. Details are still being confirmed.

I know I will continue exploring these ideas in my work. Chemical evolution science is fascinating to me, and also meaningful in a metaphorical sense of understanding and ordering my world. One of the scientists at Georgia Tech, Eric Gaucher, is looking back in time, trying to calculate and reconstruct ancient DNA sequences based on sequences we know today. That could inspire another visual approach for me: to deconstruct a complex image, pulling out more simple layers and patterns from it.