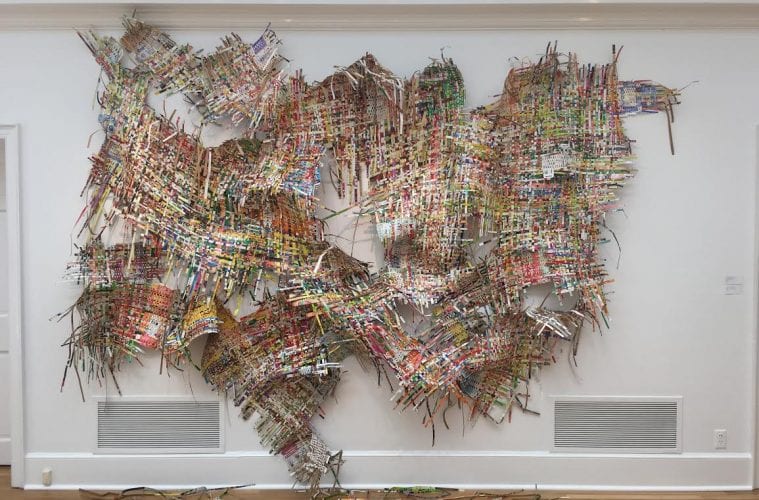 Review: “Systems” at Swan Coach House is a systematic exploration of art-making

My immediate impression upon entering Systems at the Swan Coach House Gallery (August 11 – September 23) was that the name was abstruse, and that there must be an arcane system behind the explosion of miscellany that covered the walls and spilled onto the floor of the entrance foyer.  After venturing further into the collection of work by Lauren Michelle Peterson and Amie Esslinger, the relationship  between these artists’ practices and the title became clear:  Systems presents two local artists who combine traditional media with found material to systematically explore art-making in very different ways. Peterson’s entrance installation, An Ongoing Archive of Recategorization (various dates), sets the tone for her work. This piece includes discarded materials that she has found during walks, organized and grouped with art works in-progress.  Tacked to the wall, a clipboard with a price list of digital prints looks like yet another collected object – an artifact of Peterson’s project.

Ready Made Grid (2015) dominates the right wall of the larger gallery space.  Made of woven strips of cardboard repurposed from polychrome, commercially produced merchandise packaging (like cereal boxes) , Ready Made Grid achieves the Duchampian transformation of “readymade,” everyday objects into art while engaging critical discourse about the modernist grid.  Unlike its cubist, de Stijl, constructivist or minimalist predecessors Peterson’s grid seems organic, asymmetrical  and hand-made. Its mass-produced, consumer origins are masked by its indigenous craft-like appearance.  Across the gallery, her smaller Nonexpanding Grid (2016) huddles on the floor.  Whereas the Ready Made Grid seems able to grow in all directions, Nonexpanding Grid is self-contained, like a protective cocoon of brightly colored strips that shelters a tangle of red and blue thread and shiny silver wire inside.

Above Nonexpanding Grid is an altogether different grid, this time fashioned from cotton string knotted to support hundreds of clustering cell-like squares. This is Aime Esslinger’s Parent Plant (2016).  Each “cell” contains two jewel-like ovoid shapes with an eye or nucleus in the center, floating on what look like richly colored quilt squares.  In reality, each square is comprised of carefully cut and stacked, painted paper.  With meticulous care she transforms typical painting materials with glue and glitter, on paper, to look and act like jeweled or beaded fabric. Parent Plant is simultaneously painted marks composed across a support that hangs on the wall, and a mysterious gathering of small, tangible, shimmering cell structures. Three of Esslinger’s paintings hang behind glass, to the right of Parent Plant and Nonexpanding Grid.  Sibling Protozoa (2014) features two smaller ovoid shapes in front of a larger grey one,  floating in a sea of cellular webbing and plant-like elements.  Spores (2014) and Hydro Vents and Other Difficult Places (2014) similarly include meandering lines to delineate nonspecific cellular forms floating freely around each other.  Even the inclusion of thread on the surface of Hydro Vents and Other Difficult Places does not disrupt the sense of flatness that distinguishes these paintings from Esslinger’s other large works.

Overlap (2016) brings Esslinger’s fascination with microscopic forms and systems together with her illusionistic skill of manipulating unexpected materials to create a “painting” that seems to playfully and naturally disperse across the gallery wall.  The artist layered painted paper combined with foam core, glue, synthetic eyelashes, glitter and enhanced acrylic, to create a large central organism surrounded by miniature spores, or much smaller versions of itself.  The forms are all rounded, with a nucleus (or nuclei) in the center resembling an eye.  In fact the central “organism” has an inner circle or pupil, surrounded by radiating rings of gold and blue almost resembling an iris.   But then its spores and tendrils flow outward, and the entire installation remains fascinating and mysterious.

Both artists generate forms by transforming materials into aesthetic artifacts.  Esslinger meticulously crafts elaborate and intricate compositions that evoke microscopic natural systems.  After carefully collecting and painstakingly categorizing discarded items she discovers on walks, Peterson translates her found objects and consumer detritus into artifacts of our social system.  And as Curator Marianne Lambert notes, both artists create and decode systems through art.