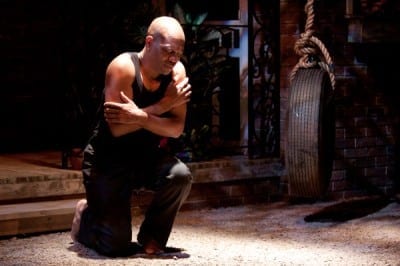 “Sweet Tea: Black Gay Men of the South,” a book and a performance

Editors note: We welcome another new voice to ArtscriticATL.com. Joey Orr made his name in Atlanta as an entrepreneurial and sharp-eyed curator before he left to earn a master’s degree in visual and critical studies from the Art Institute of Chicago. Orr is back in Atlanta, this time as a doctoral student in Emory University’s Graduate Institute of Liberal Arts, pursuing his interest in queer studies. — Pierre and Cathy

“Sweet Tea: Black Gay Men of the South,” a book of oral histories, came to life in a performance at Kennesaw State University the weekend of Sept. 18, part of the school’s “The Spoken Word!” series.

Professor E. Patrick Johnson, chair of the Department of Performance Studies and Professor of African American Studies at Chicago’s Northwestern University, collected the stories, published by the University of North Carolina Press in 2008. At 584 pages, it is a tome, the kind of work that is often referred to as “archive fever,” or the “acceleration of history.”

The project breaks ground on many levels. First and foremost, it does the important work of documenting the lives and experiences of black gay and transgendered men in the South. If no one actually sits with people and listens, these stories never get recorded. They are erased from history and so never inform the future. This work breaks further ground by being tirelessly interdisciplinary. In other words, Johnson (pictured below) does not accept that all things fit neatly into historical or archival categories.

And the oral histories can be performed, as they were at the Kennesaw spoken word event, coordinated by Hannah Harvey and sponsored by the Department of Theatre and Performance Studies.

In the engaging “Pouring Tea: Black Gay Men of the South Tell Their Stories,” Johnson described eight of his subjects: Freddie, Michael, R. Dioneaux, C.C., Chaz/Chastity, Countess Vivian, Stephen and Duncan Teague. Each segment began with a song (Tommy Dorsey’s “Precious Lord,” RuPaul’s “Cover Girl”) and an audio clip from the oral history being presented. Then Johnson performed a part of the interview, playing himself, impersonating the interviewee and occasionally taking a drink from his glass of iced sweet tea.

Topics ranged from childhood to coming out stories, and from religion to being transgendered to masculinity and being a Southern diva. Each character was distinct in dialect and mannerism, and this made for a one-man show packed with personality, emotion and sharp social and political commentary. Clips from Sweet Tea performances can be viewed online.

The book is a trove of information about race, region, religion, gender and sexualities for historians working in Southern contexts and for any reader who enjoys getting swept up in a good story. The performances are the author’s way of passing along his research within the oral tradition.

With his dual methods of presentation, writing and performance, Johnson not only records histories but also breathes life into them, never losing sight of the fact that we really engage with history only when we engage with one another.