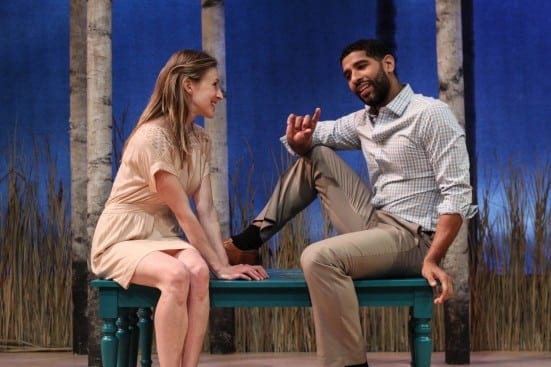 The title of Aaron Posner’s play Stupid F–king Bird and its tagline “Sort of adapted from ‘The Seagull’ by Anton Chekhov” may lead you to expect a loose, rambunctious, bawdy, satirical take on Chekhov’s classic. There’s certainly some of that in the mix, but the popular new play — currently in an appealing production at Actor’s Express through October 11 — is really just a condensed version of Chekhov’s original, more or less laying out the same characters, tones and themes and telling us the same story, only in a shorter amount of time. It’s a quick, straight-forward and funny trip into the playwright’s world.

The action of Stupid F–king Bird parallels the action of The Seagull. Con (Robert Lee Hindsman) is an unsuccessful young playwright, the son of a famous, self-absorbed actress, here called Emma (Lane Carlock). In the play’s first act, the young ingenue Nina (Stephanie Friedman) performs one of Con’s experimental theatrical works. Con adores Nina, but she ends up falling for Emma’s lover, Trig (Evan Cleaver), a famous writer. As in all of Chekhov’s work, there’s despair, personal failure and self-doubt aplenty, both in the main players and in the supporting characters.

Each role in Chekhov provides an actor with the opportunity to create a richly detailed, fascinating and complete portrait of his character on stage. It remains true here, and the best part about Stupid F–king Bird is the work of the fantastic ensemble. They ease into the roles with deftness, humor and honesty. There’s a contemporary plain-spokenness and directness to Posner’s adaptation (the characters are conscious they’re in a play and occasionally address the audience directly), and this the actors take on especially well. There’s a lot to praise about every performance, but I especially admired Theo Harness as Sorn; the character’s Act II speech directly to the audience on the occasion of his birthday is a highlight of the show. Leslie Taylor’s lovely set suggesting a barren Russian forest could do double-duty for a somber straight-forward production of The Seagull, and its transformation into a detailed contemporary kitchen for Act II is thoroughly impressive.

As appealing as Stupid F–king Bird is, it’s hard to watch without lamenting the fact that Atlanta theaters never actually produce Chekhov. As usual, there are no productions of his work in Atlanta this season, but strangely there’s another opportunity to see a play “sort of based” on Chekhov, a production of Christopher Durang’s hit comedic take on the Russian playwright, Vanya and Sonia and Masha and Spike, which moves from the Horizon where it played in June to the Aurora Theatre where it will run in October.

They’re fun shows, but one has to wonder: Is it even fair for a theater to condense and satirize a playwright whose work they never produce? Parts of Chekhov’s play The Seagull are self-referentially about the theater, and Posner uses the opportunity for some ironic “whither the theater?” hand-wringing, though the deepest irony is that the presence of his play in a city where the writer’s original work is never performed is a pretty dark prognosticator in and of itself. I realize the practical demands placed on Atlanta theaters often disallow productions of classic works, but there’s something about these new endeavors that seems aesthetically off-kilter.

Bird and the like are a form of pandering that ultimately shortchanges contemporary audiences and artists alike. Pandering in the playhouse is hardly singular to these productions, but the works’ relationship to Chekhov puts any shortcuts or shirking of duty into a very harsh light indeed. Anyway, if  Stupid F–king Blossom is up next, let’s just hope we get the chance to have a peek at what The Cherry Orchard looks like first.