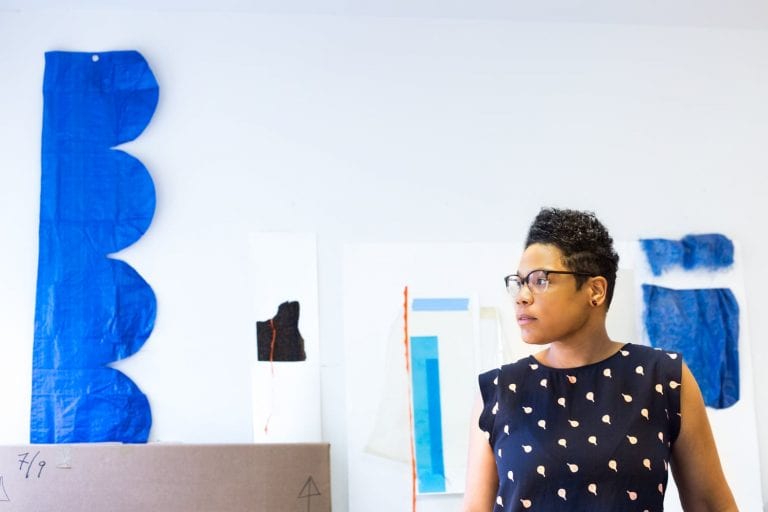 In the studio with Krista Clark

Krista Clark’s new work Plotting the Other Side temporarily occupies a tiny, interstitial space at the Atlanta Contemporary Art Center. The work’s quiet activation of the space and its powerful sense of dialogue with the institution intrigued us enough to stop by Clark’s Westview studio to chat with the artist about her process.

ArtsATL: I was interested to learn that you refer to these works as drawings. Can you tell me about that?

Krista Clark: I’ve just in the past week or so shifted to calling them works on paper. My background is drawing and printmaking, so my entrance into all of the work is from a drawing vocabulary. I’m not at all formally trained in anything that is three-dimensional, so I’m kind of learning all of that as I go. 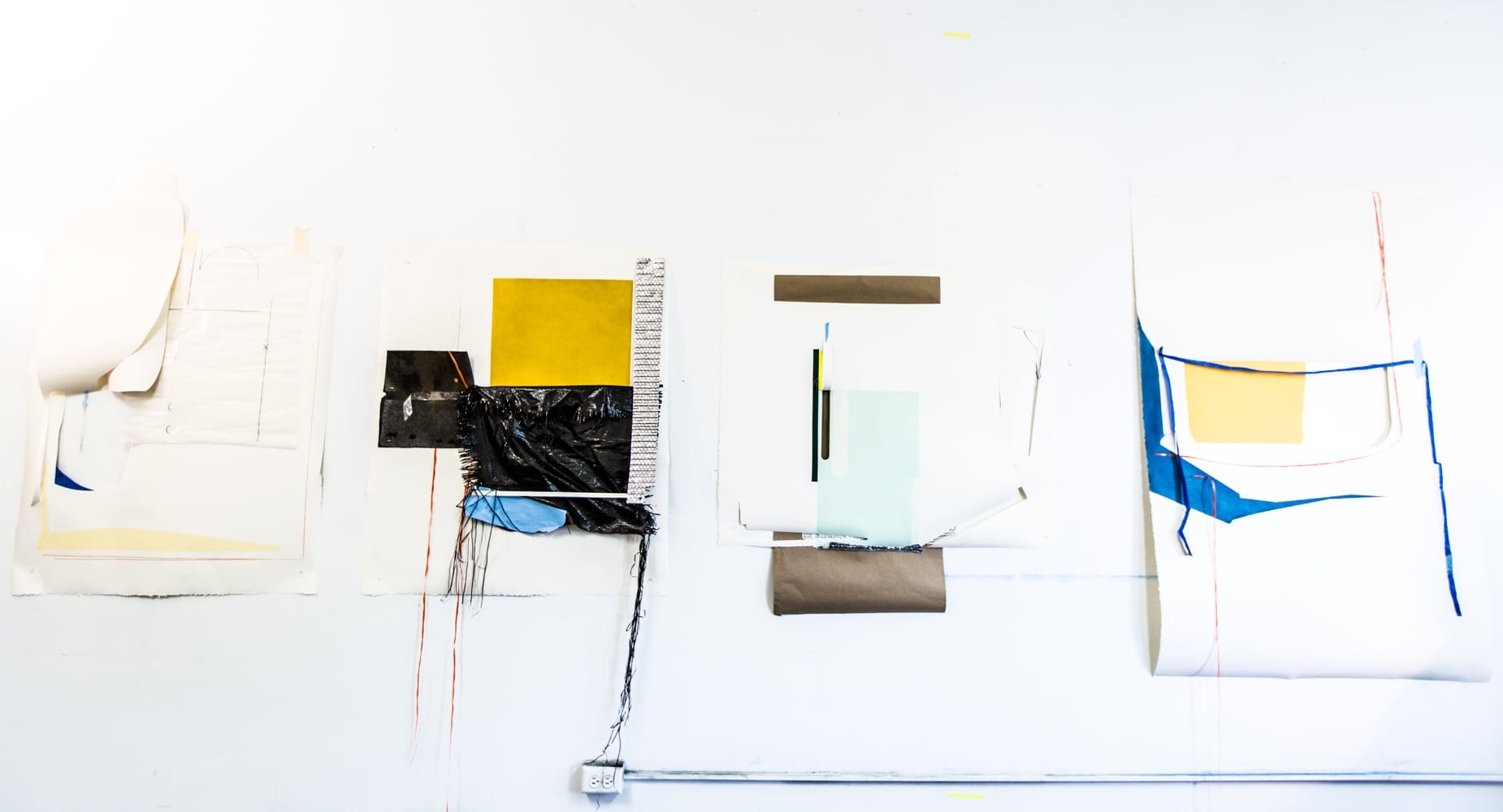 ArtsATL: You earned your MFA not too long ago [Georgia State University, 2016]. You didn’t go back to school to study three-dimensional work?

Clark: It was for drawing. My undergrad was at Atlanta College of Art. That was printmaking.

ArtsATL: How did this phase of your work get started?

Clark: It was a switch, I guess, from when I was creating more representational work. I was doing ballpoint pen drawings; I was teaching high school for six years. Then I did a year at Parsons School of Design. Even though I had been teaching high school art, I’d been kind of outside the art world. It was an amazing experience, but it was also kind of a shock because it had been so long. That’s I think where the shift happened for me in terms of breaking outside my comfort zone with drawing. That was where I was pushed to think beyond the literal, just think in a different form in terms of material. I did a year there and then transferred to Georgia State. I was just trying to figure out what I was doing. It’s always been about this search of space, figuratively and actually. I was playing around with my own mark-making within the space of the drawing and the idea of this expedition. It became more concrete in thinking about the exploration of architectural space and using more of that language. There was a shift into more abstraction, but thinking about actual environment and landscape and built forms. I’m trying to combine that with my own drawing. 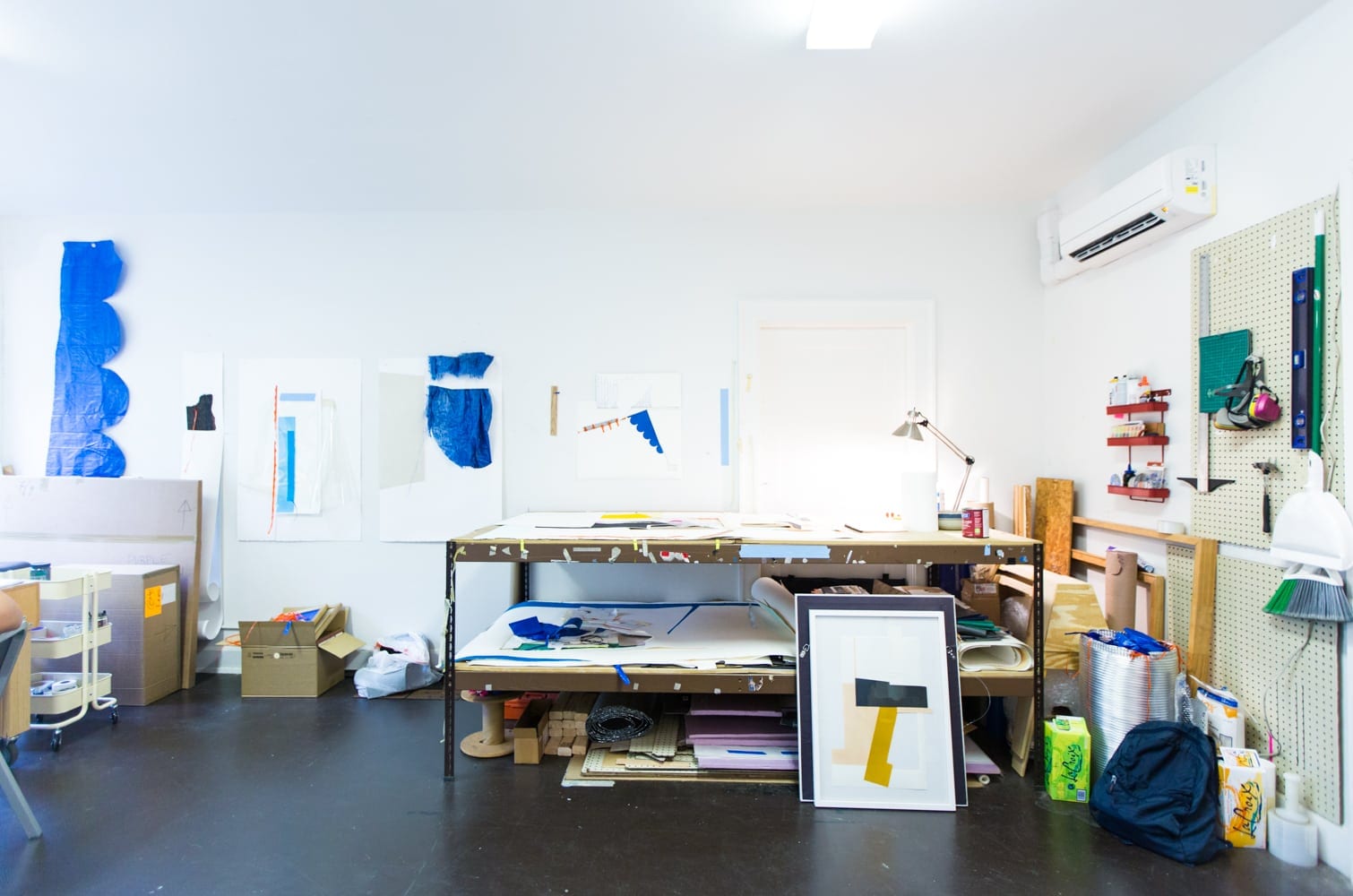 ArtsATL: I imagine you must still occasionally do what we think of as traditional drawing, though? Or has it shifted entirely to this form?

Clark: I have been trying to bring more of the traditional drawing back, but I haven’t been able to. I still want to in a way that works with where I am now. Every time I go back to what I was doing before this, it always feels really fussy. I love drawing. But for me I’m just trying to figure that out because drawing is so much a part of me, I don’t ever want to lose that aspect of it.

ArtsATL: Can you tell me how one of these works comes together?

Clark: Generally it will start off with an observation of something in my surroundings, just a small little moment I’ll see. It will start with that. It can be something like the drape of a fabric . . . . From there it becomes more intuitive. The last year has really been about material exploration; now I’m really reining that in, kind of taking what I know from that, definitely trying to break up the main things that I generally incorporate by cutting away and removing pieces. The cutting becomes a form of drawing in some sense. 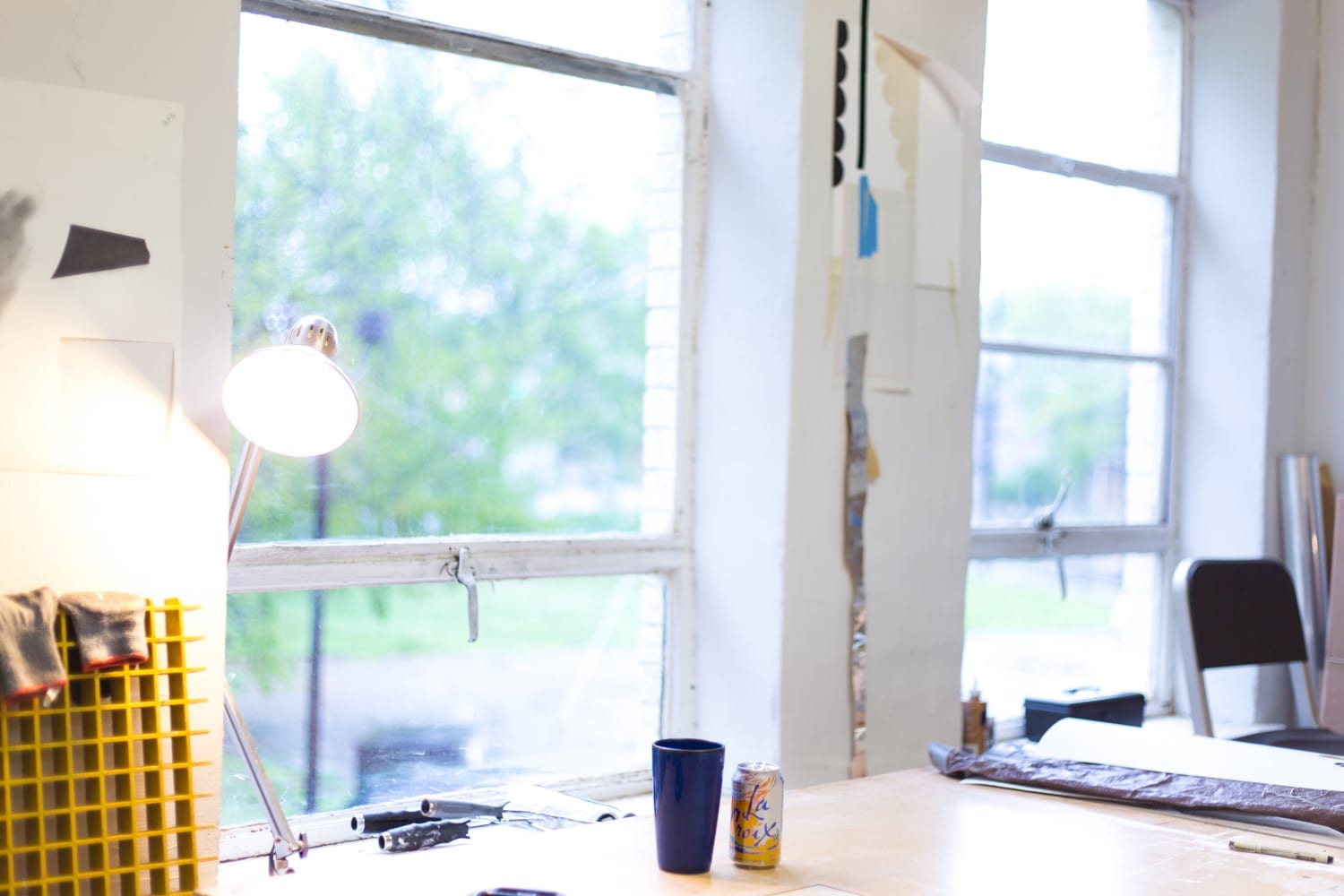 ArtsATL: Do you create these on the wall, or do you work at the table?

Clark: Both. Initially I used to work on the wall, and then I started working on the floor. It’s become sort of wall, floor, table. But they definitely end up on the wall, and I finish them there. 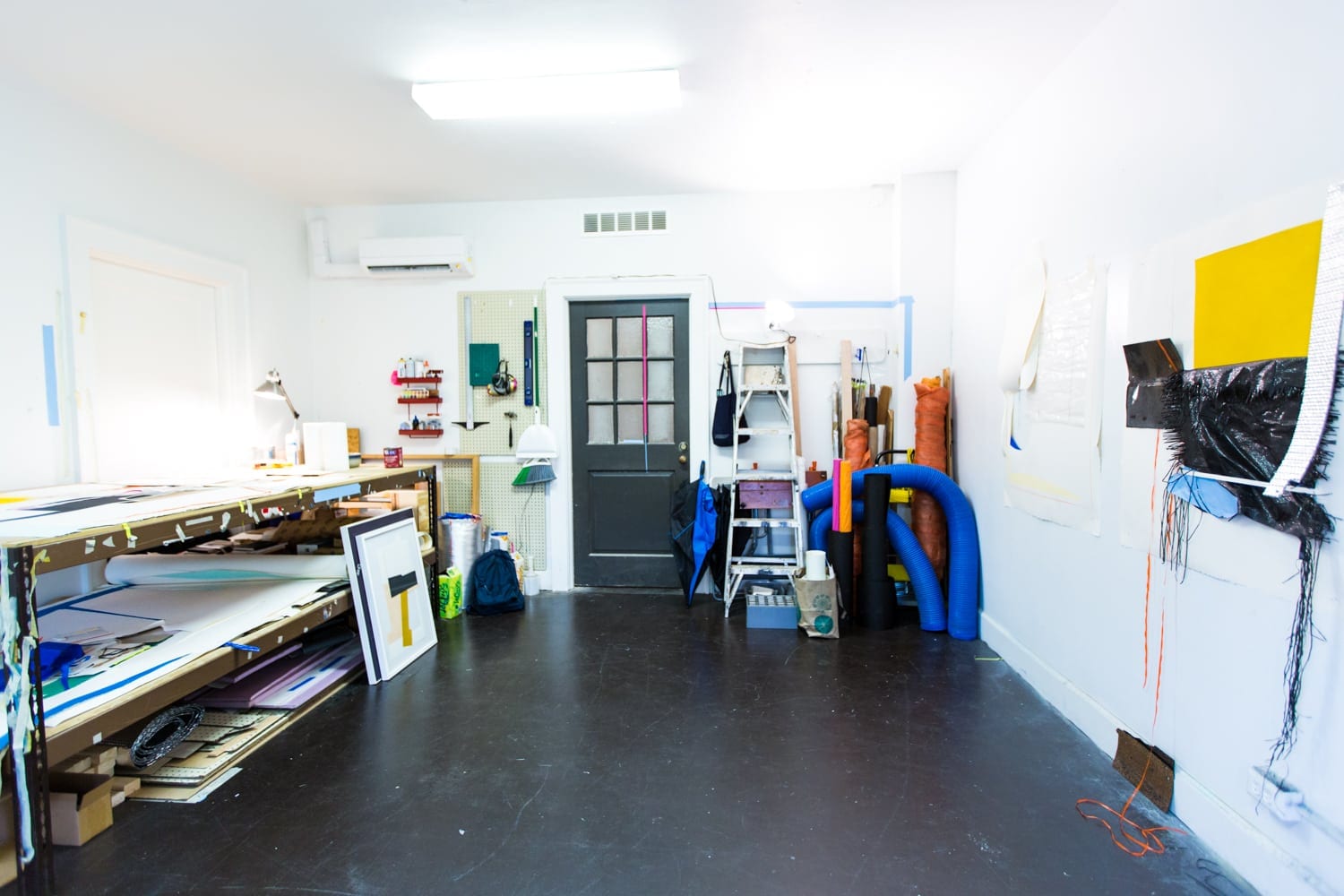 ArtsATL: I was curious to hear you use the word “architecture” when referring to these works.

ArtsATL: Do you title them?

Clark: Only when I have to. And the titles change. 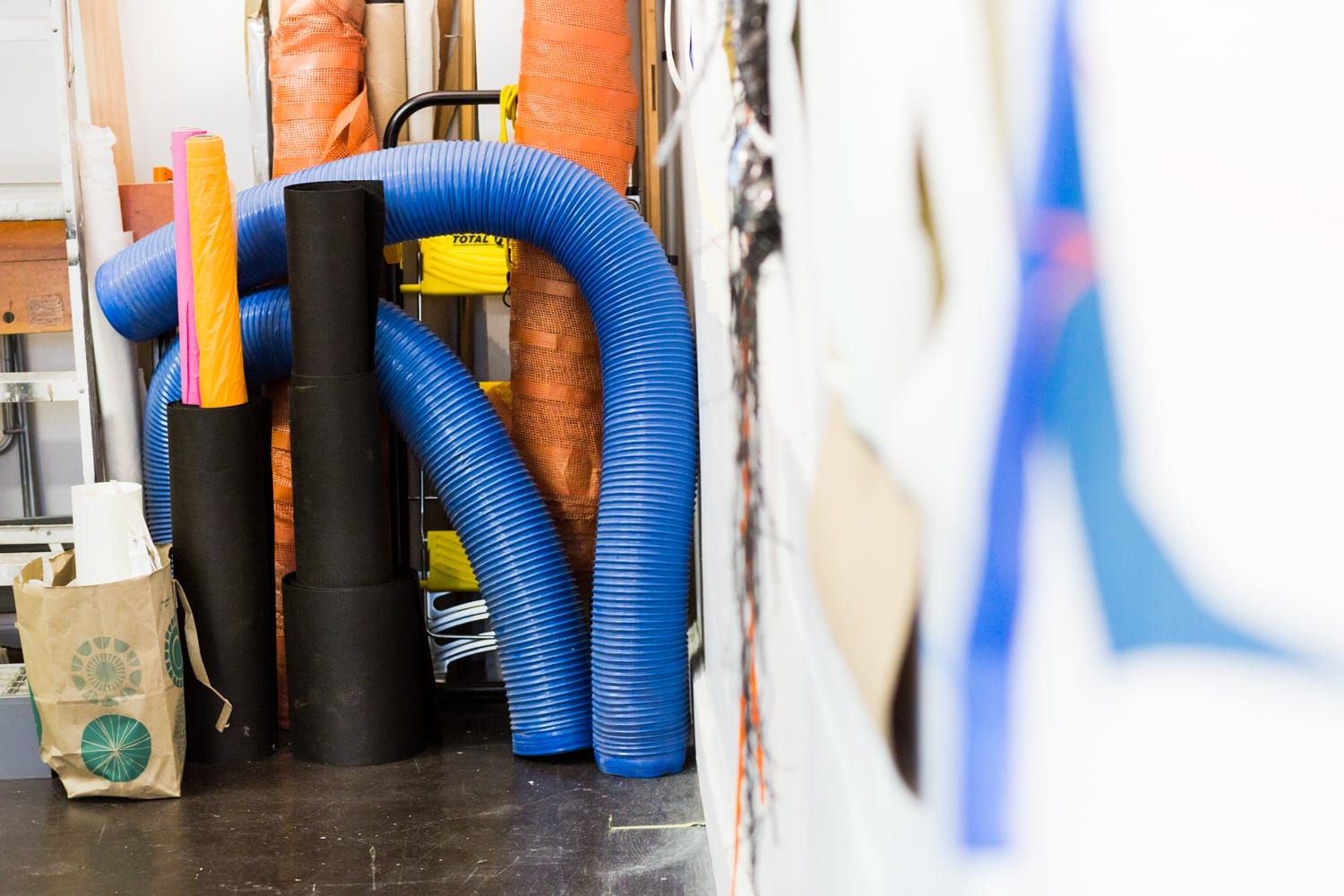 ArtsATL: How do you find materials?

Clark: It’s a combination of purchased and gifted and some found. In the installation I have at the Contemporary, there are pieces that I took from part of the space that’s not being used there that used to be Nexus.

ArtsATL: The wall text at the Contemporary says your piece is about this neighborhood and the gentrification happening here. Do you think of your work that way?

Clark: We [my husband and I] live here. I could walk from my house to the studio. It’s definitely informed by living in the neighborhood, but it’s specific only in that this is where I am and these are my surroundings. But the work is more about the general, within any large city, the changes that are happening. Even though it’s where I’m coming from, I don’t see the work as specific to this neighborhood, or even specific to Atlanta. 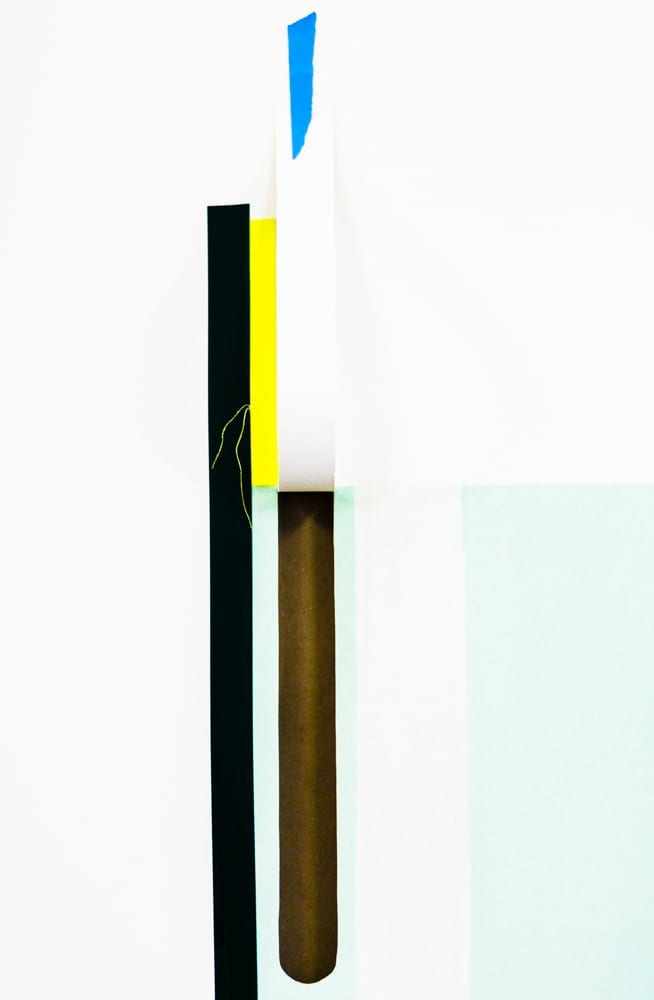 ArtsATL: How did you decide to become an artist? Were you exposed to a lot of art and artists as a kid?

Clark: I’ve always thought of myself as an artist and didn’t really look beyond that, for better or worse. We were lucky in that we were only an hour away from Montreal in Burlington [Vermont]. I had an aunt who was an artist in her own way. I felt I was always exposed to it in some way. My sisters were artists also. My parents were not, but I felt like I was always exposed to it.

ArtsATL: What was it like growing up in Burlington?

Clark: I loved it. I love it. I will always be a Vermonter. It was challenging because it was small. My family was one of two black families in our community. It was hard. I think that’s why my family is so close. It definitely is why I am who I am. It’s steeped.

ArtsATL: What does a typical work day look like for you?

Clark: During the day I teach at Morehouse. When I come into the studio, I’m generally continuing on something I’ve already started. I’m looking forward to the summer, letting reading inform my practice more.

ArtsATL: How do you find teaching at Morehouse? Does it feel related to your studio practice, or do you like it because it feels like something distinct?

Clark: I think both … The class I teach is a survey of visual art/art appreciation. It’s been a balance this year because it’s a reopening of myself to art history, which I love. It’s just been a lot in terms of preparing for that, but I love that. Right now, I like it maybe even more than teaching a studio class because it takes different energy teaching studio, just trying to help push students through the creative process. I don’t have any art majors at Morehouse, which is good and also challenging. I like it, but it will be nice to have this first year over with, to have that under my belt.

ArtsATL: What was your own experience like studying at Atlanta College of Art? It just seems like so many of the graduates I encounter are really special, productive artists.

Clark: It’s funny because I’ve been hearing that. When you’re in it, you don’t realize it. But it was a special time. My senior year, I just knew that was a special time. I didn’t want to leave. It was an incredible experience because it was so small. There were like 400 students. When I transferred there, I was studying graphic design, which was not for me. Thankfully, an advisor suggested I check out printmaking. Their printmaking studio was one of the best printmaking spaces I’ve seen. Teachers like Norman Wagner and Larry Anderson were big influences. They were huge parts of my experience there. I used to spend all of my time in the printmaking room. It was a special time. 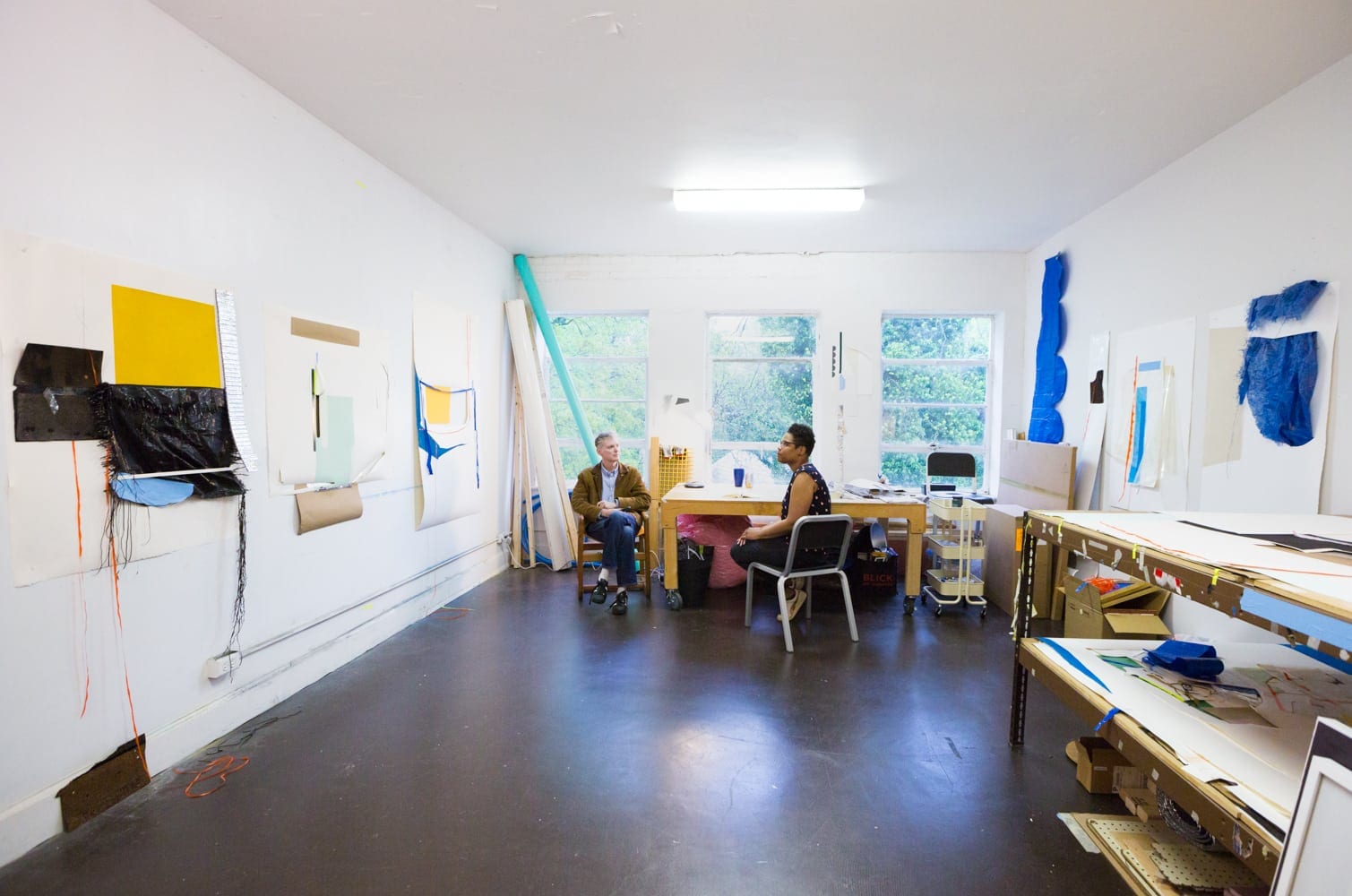