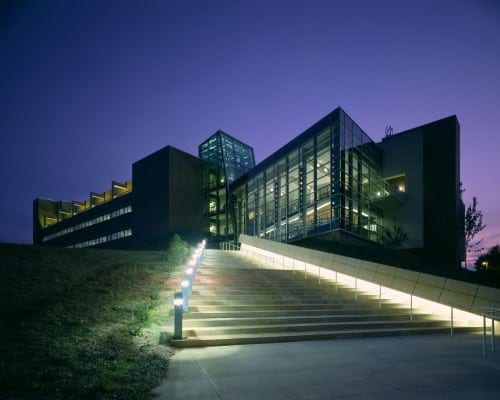 Next door to the Ellis Hotel in downtown Atlanta, on the airy sixth floor of the former Macy’s department store, towering doors of clear-stained maple open to reveal the offices of Stanley Beaman & Sears, the architects behind compelling, contemporary projects dotted across metro Atlanta and far beyond. But it’s here, at the company’s headquarters, where the line between architectural firm and art gallery truly blurs. Sculptures by John Acorn in the firm’s downtown Atlanta office.

Blank white display boards hang in a long corridor, awaiting an upcoming collaboration with Whitespace gallery. Two wooden sculptures by artist John Acorn, including one of a man’s head split open and festooned with metal rivets, stand elsewhere. A large, boisterous Radcliffe Bailey piece adorns a lobby wall. Paper party decorations dot the in-house bar and café, where it’s hardly frowned upon for employees to crack open a cold beer well before quitting time. Nothing about the space suggests a staid, corporate mind-set — and that’s all intentional. The firm’s architects and designers pride themselves on challenging the status quo through a process of interdisciplinary collaboration — blending architecture, interior design and graphic design — which is incubated in the wide-open, 25,000-square-foot office space. (It’s tough to ignore the evolution of your colleague’s project when it’s displayed on a series of pin-up walls.) In an industry still challenged by recession-era budget cuts, SBS has vowed to remain a medium-sized firm with about 50 employees, falling between a boutique outfit and what they laughingly call “big-box” conglomerations.

Recent commissions attest to the success of the firm’s tight-knit collaborative processes and aversion to bland design.

Last year, a panel of judges selected SBS to transform the lobby at 72 Marietta Street, the former Atlanta Journal-Constitution building, into an art gallery. At Kennesaw State University, the firm is nearing completion of a $3 million art museum adjacent to the school’s Bailey Performing Arts Center. And Kansas City-based 360 Architecture selected SBS as one of three local partners in the design of the Atlanta Falcons’ estimated $1 billion new stadium. (Beaman said she can’t yet discuss her firm’s involvement in the stadium, which conceptual renderings depict as an origami-like structure with a roof that opens from the middle, like a camera’s aperture.)

Kimberly Stanley said the firm’s passions are projects involving health, education or art. Among its Georgia projects are Children’s Healthcare of Atlanta, the Health and Natural Sciences Building at North Georgia College & State University, and the renovation and expansion of the Georgia Museum of Art in Athens. Art has a way of influencing all the firm’s designs. For instance, it has earned a reputation for imbuing artistic elements such as curved walls and river-like walkways into typically sterile hospital environments. “We try to find ways to integrate art into all of our projects,” Stanley said. “And we want to work with projects that interest us socially.” A rendering for 72 Marietta Street.

Case in point: the former AJC building on Marietta Street. The SBS design bested plans from four other firms by taking art out of the gallery and into a downtown street that could use an aesthetic slap in the face. Inspired by the fluid lines of nearby train tracks and the bygone marquees of downtown Atlanta, the team designed a series of white aluminum ribbons to shoot from within the art gallery to the top of the eight-story building, backed by a lime-green façade that will give passers-by the illusion of changing colors as sight lines change. The former lobby will be bifurcated into two galleries, one dimly lit for mixed-media and video installations, the other awash in natural light.

In Kennesaw, the Bernard A. Zuckerman Museum of Art, an intimate space at just 9,200 square feet, will stand out on a campus full of utilitarian modern architecture. The museum will house SBS’s first art installation, a large textural piece that will hang beside a stairway for a year. The piece mimics the firm’s computer-generated designs of the museum’s roof and surrounding topography; it might even be covered in crackle paint as an ode to dried red clay.

In addition to metro Atlanta, SBS has a mixture of art, health care and education projects in various stages of development in Iowa, Indiana, Texas, Virginia, West Virginia, Illinois and Florida. These include an $8 million art museum for West Virginia University, set to break ground in September. Internationally, the firm is pursuing projects in China and Ireland and is offering pro bono designs for a free-standing women’s and children’s hospital in Ethiopia.

Staring at pinned-up renderings of the company’s first gallery piece, in Kennesaw, Beaman smiled. A few moments earlier, she had offered a writer a beer. Surely it was 5 o’clock somewhere, and for the SBS crew these renderings, this manifestation of their appreciation for art, were reason enough to celebrate.

“Infusing some art component into our design is highly important,” Beaman said. “It’s what energizes us.”

View more photos of the firm’s work, and its own office, here.