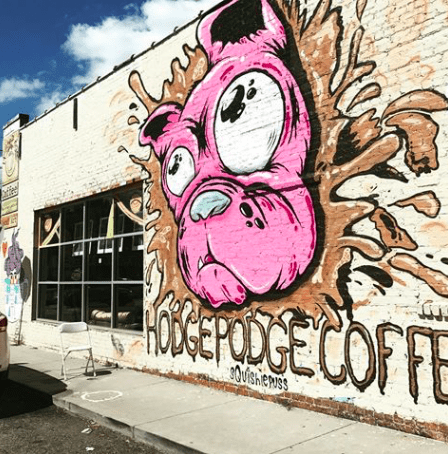 Squishiepuss murals covered up after allegations of sexual harassment

Murals across Atlanta by popular local artist Ray Geier, who creates art under the moniker “Squishiepuss,” are being covered up all over the city after numerous allegations of sexual harassment and misconduct began to surface at the start of the year.

Geier — one of Atlanta’s most prominent muralists — is known for his pink French bulldog character, which has long been displayed in the form of murals and wheatpastes around the city. He also has collaborated on several group shows around Atlanta and hosts a podcast where he interviews creatives.

Squishieland, a commission-free gallery at the Beacon Atlanta, was slated to open earlier this month. His lease and relationship were terminated by the complex after several women publicly came forward with allegations of inappropriate comments, unwanted advances and more serious accusations.

Geier did not respond to emails seeking comment. He posted a video apology “to Atlanta” on social media on January 4 and told the Atlanta Journal-Constitution last week that he has retained a lawyer, who instructed him not to comment. 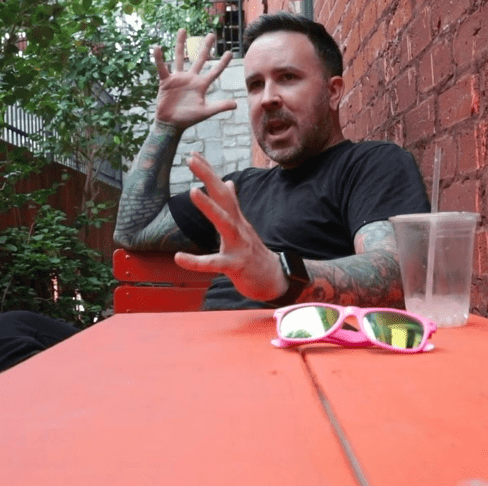 Shortly after allegations began to surface, Geier posted a video apology to the city.

Scott and two other women shared their experiences with ARTS ATL.

Scott told ARTS ATL that she began to quietly warn others about Geier’s behavior over the past few years following her own experience with him. She said his upcoming gallery opening pushed her to publicly come forward. “I just felt like he was going to be using that power to prey on young, impressionable artists who are trying to break into the Atlanta arts scene,” she said.

Scott was 21 when she moved to Atlanta in 2012. She said she met then-32-year-old Geier, who offered to collaborate with her and take her to do wheatpaste work, a sort of paper mache for murals, around town. She said that offer of mentorship took a turn after she broke up with her then-boyfriend. According to Scott, Geier began to make objectifying and lewd statements about her body via text. She also alleges that he once stalked her while she was on a date.

Another local female artist, Aliya Smith, met Scott before Geier’s 2018 Squishiepuss birthday party group show, a local event last April that celebrated Squishiepuss’ fifth birthday. Smith was set to participate in the show, but after she and Scott realized they had similar experiences with Geier, Smith decided to pull her artwork.

Once she saw Scott’s Twitter screenshots on December 31 and heard about the upcoming opening of his gallery, Smith said she knew she also had to come forward with her own experiences with him. 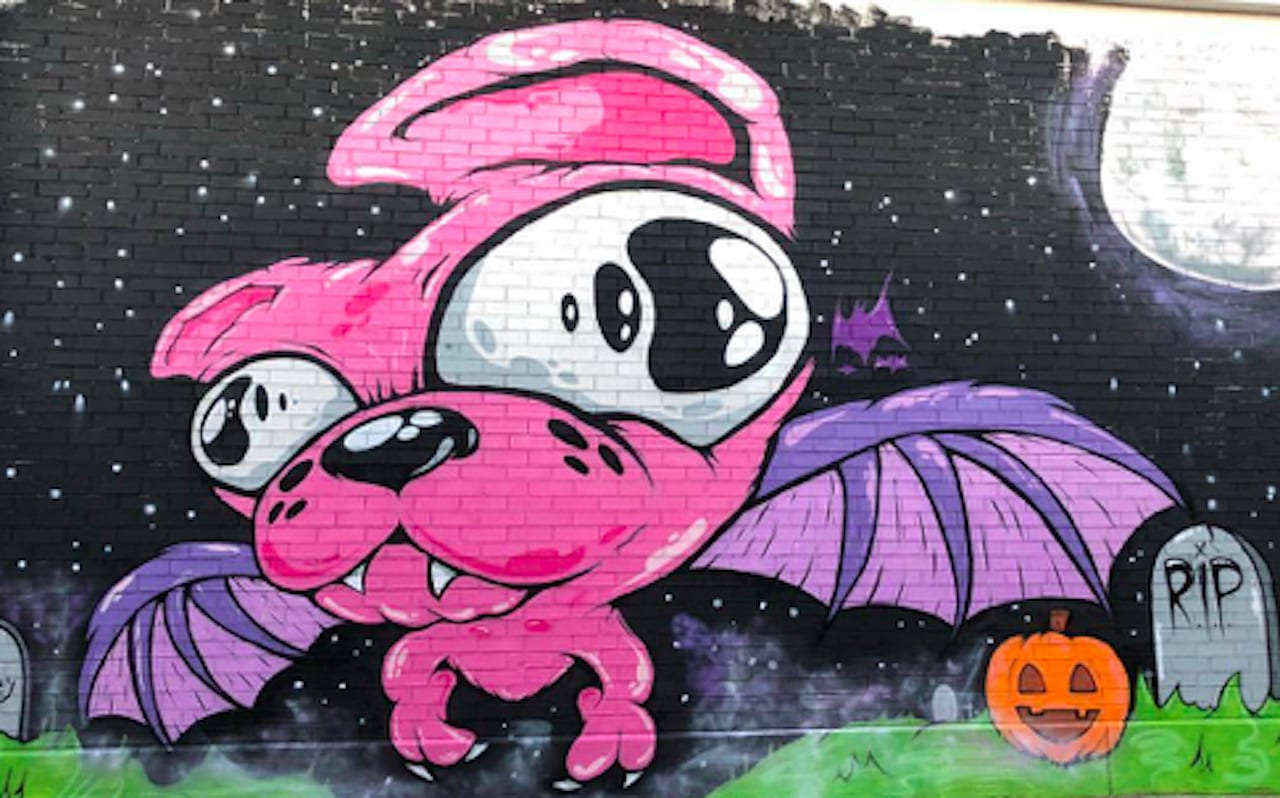 Geier’s Squishiepuss murals could be seen all over the city.

“He was very comfortable treating women like they weren’t people and harassing them,” Smith told ARTS ATL. Smith reposted the Twitter screenshots from Scott on Instagram on January 3, followed by a first-person account of her experience with Geier that included statements of body objectification that he made during a local drawing event and lewd comments after she rejected his advances.

Smith said she received nearly 400 responses to her posts, including about 40 from women who claimed to have had similar experiences with Geier. Upon the legal advice of a friend, she took her Instagram story posts down that same day.

A third Atlanta artist, Brooke Powell, shared her own experience with Geier on her Instagram on January 4. As she was setting up in Atlanta as an artist, she said that Geier offered to introduce her to the local arts scene. But after a handful of meetings, she said he began making objectifying and inappropriate comments to her about her body. She quickly cut ties with him.

“What was the most alarming thing about all of it is how easily I began to brush it off and discredit myself,” Powell told ARTS ATL. “When Aliya [Smith] made those posts, speaking out about the [allegations] and similar situations with other women, it woke me up. I shared [my experience] with her.”

On January 4, Geier posted a four-part apology video to his business Instagram and Facebook pages, where he apologized to the city and acknowledged the sexist, fat shaming and abusive messages in his Twitter account. The caption read, “Dear Atlanta, I’m sorry. I let you down and I’m heartbroken by it. I can’t apologize enough.”

Geier said the Twitter account goes back a decade, a time before he moved to Atlanta. “It was heartbreaking to see [the tweets] again,” he said in the video. “I want to take you back a decade into my life to a point when I was not happy. I had no purpose. [. . .] There was a lot of depression and anxiety. I said things, I lashed out. Things that I’m sincerely embarrassed by . . . . The things I said were gross and disgusting.” 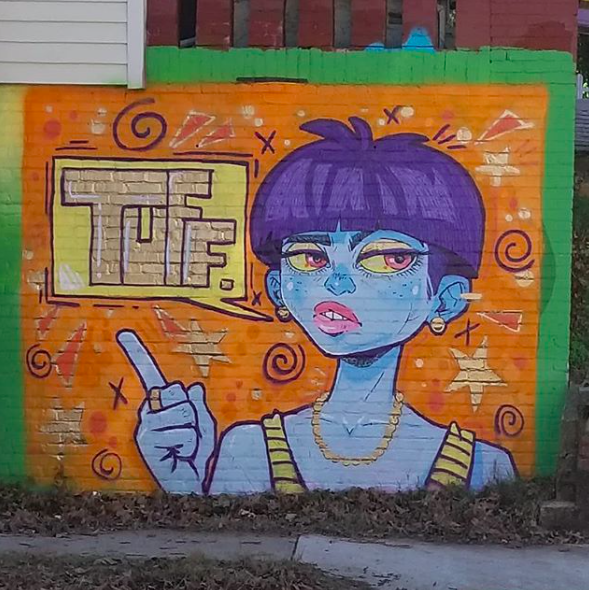 Atlanta artist Courtney Hicks covered one of the Squishiepuss murals with a pointed message.

Online commenters on the videos were quick to voice their dissatisfaction that Geier did not acknowledge or apologize directly to the alleged victims. The videos and Geier’s business social media accounts were deleted less than 12 hours after posting.

Smith and Scott, who are currently seeking legal counsel, expressed shock by the amount of stories of local women that they received via social media. Since Smith and Scott have come forward, more accusations of inappropriate behavior by Geier have surfaced on social media, spanning the 10 years he has lived in Atlanta.

“I don’t do misogyny,” Rodriguez told ARTS ATL. “As a business, we have always been a safe space for our community. I made the decision to replace his work with a piece by Kayleen [Scott]. I could have quietly covered it, but I wanted there to be no uncertain terms where we fall on this. We believe and support women always.”

The Beacon Atlanta, a retail destination in Grant Park and former future site of Geier’s gallery space Squishieland, released a statement on January 6 that announced it had “terminated its relationship with Ray Geier. Squishieland will not be part of the Beacon.” The gallery also noted it wants to provide a safe environment for artists.

Beyond the business community, the local arts community has come out in support of the women who came forward with the sexual harassment allegations.

Shortly after Scott, Smith and Powell came forward, Michelle Khouri removed her interview with Geier from the archives of her podcast, The Cultured Podcast. Khouri now wants to provide a voice and platform to the local women who came forward.

“When I saw the sheer volume of women come out with their own firsthand accounts, from misogyny to more serious accusations, it was a no-brainer for me,” Khouri said. “I wanted to make a very intentional point of replacing his episode with one dedicated to sharing the voices of the women that he hurt.”

In the past two weeks, she’s interviewed several key players in the allegations, along with a psychologist. She plans to release the episode soon. 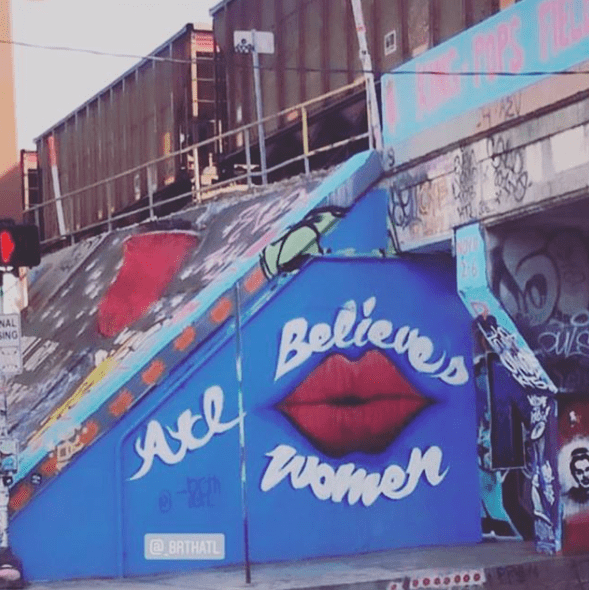 “The bravery of the women who came forward to show us the truth of Ray’s character cannot be understated, and I am immensely encouraged by how quickly the Atlanta art community joined together to support the victims,” Hicks told ARTS ATL.

Hicks is in contact with several other businesses about moving forward with more cover-ups.“The movement to cover up the ‘Squishipusses’ felt like an important step in the process of supporting the women, and severing Ray’s ties to our art community,” she said.

“The whole city is coming together and supporting these women, and I felt this mural was the perfect representation of Atlanta in this moment,” Clark said. “Women go unheard every day because of so many factors, but I know that things are shifting in our society. This was just a glimpse of those changes.”

Powell said she is glad she came forward with her story. “You never know what kind of like feedback you’re gonna get, and a lot of times people pick apart your words,” she said. “To see not just the size of the support response, but how rapidly it took flight, I’ve never been more enthusiastic about the future of the art scene.”