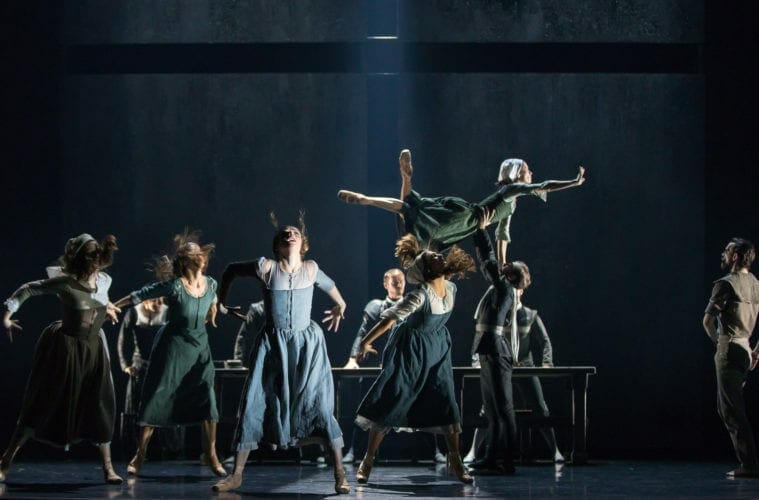 A festival highlight will be the Scottish Ballet's performance of "The Crucible," which was choreographed by former Atlanta Ballet choreographer-in-residence Helen Pickett. (Photo by Andy Ross)

Charleston’s Spoleto Festival USA has announced its 44th season, a 17-day smorgasbord of performing arts unmatched in the United States. For Atlantans, it has the advantage of being within driving distance and affordable. It’s also an excuse to spend time in one of America’s most beautiful cities, full of great restaurants and historic sights. As always, the festival opens Memorial Day weekend. This year’s dates are May 22–June 7.

Tickets are now on sale; a full schedule and ticket instructions are available on the festival website. It’s always best to buy tickets in advance for major events, but it’s often surprisingly easy to grab seats on the day of performance, especially on weekdays. Hotels do fill up, at least the ones “on the tongue” (the nickname for the Charleston peninsula), which put you within walking distance of almost everything. But things are more relaxed, and less expensive, in the suburbs.

Opera has long occupied center stage here, appropriate for a festival created by an opera composer (Gian Carlo Menotti). This season features an important world premiere focused on Charleston’s history. Omar, with a libretto and score by Rhiannon Giddens and co-composer Michael Abels, is based on the life of Omar Ibn Said, and follows his spiritual journey from Senegal to enslavement in the Carolinas. Charlotte Brathwaite, known for her edgy and provocative work, will direct. Jamez McCorkle will sing the title role. Until last season, the festival could almost always be counted on to present three  operas. Last year featured only a fascinating, risk-taking production of Strauss’ Salome. General director Nigel Redden said that when this season was being planned, the status of the Westminster Choir was sufficiently imperiled that he needed to avoid depending on it to furnish the chorus and many (if not most) of the singers for the operas. And while the virtuosic ensemble, from Westminster Choir College in Princeton, New Jersey, plans to celebrate its own 100th anniversary in residence at the festival, the opera program is again restricted.

This season’s music program is far-ranging. As always, the Bank of America Chamber Music series is the mainstay, with 11 programs, each repeated three times. Gifted violinist Geoff Nuttall is the director, and his St. Lawrence String Quartet will be joined by many of the greatest names in classical music.

Music in Time, which tends to focus on experimental classical works, has expanded and will now include three programs. For example, Fredrick Giffords’ “Difficult Grace” will be performed on a program with works by Monty Adams, Nathalie Joachim, Chinary Ung and the U.S. premiere of Fausto Romitelli’s “Your Time Is Over.”

The Westminster Choir, simply one of the finest choral groups in America, will celebrate its 100th anniversary with a program featuring Benjamin Britten’s “Hymn to St. Cecilia” and works by Pawel Lukaszewski, Daniel Elder and Jake Runestad.

An episode of American Public Media’s Live From Here will be performed live from the festival.

Spoleto also has strong jazz programming. The iconic Preservation Hall Jazz Band will perform songs from its new album, So It Is.

Other jazz programs will include the Cookers, a super-group of seven jazz legends, and Abdullah Ibrahim and his band, Ekaya. Also scheduled are Until the Flood, a one-woman show with Dael Orlandersmith based on interviews of people in Ferguson, Missouri, after the shooting of teenager Michael Brown. Sea Sick, based on Alanna Mitchell’s bestselling book about climate change and its effects on the global ocean, is also a one-woman show. Wonders at Dusk comes from illusionist, mentalist and performance artist Scott Silven.

For years, Spoleto audiences have appreciated physical theater or contemporary circus shows, and this year there will be two. Australia’s Gravity & Other Myths will return with Out of Chaos. And Quebec’s Machine de Cirque will make its Spoleto debut with the U.S. premiere of La Galerie, a whimsical piece set in an art gallery.

The Scottish Ballet return to the festival with Helen Pickett’s The Crucible, based on the Arthur Miller play and with new music by Peter Salem. Pickett, a former choreographer-in-residence at Atlanta Ballet, created a show based on Tennessee Williams’ Camino Real.

Flamenco master Sara Barnes will present Sombras (Shadows). She’s known for the style of la farruca — rapid-fire footwork that is traditionally the province of men.