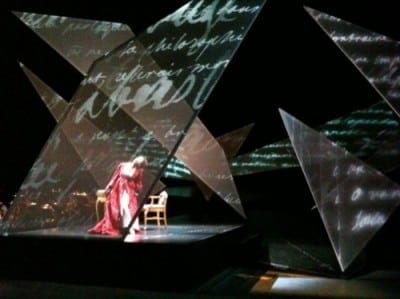 Charleston, S.C. — Finnish composer Kaija Saariaho burst onto the opera scene with the premiere of “L’amour de loin” in 2000 at Salzburg. Based on the writings of a 12th-century troubadour, it was immediately recognized as a groundbreaking masterpiece, soon traveling to Paris and then the Santa Fe Opera. I remember the amazement we felt — I was in the audience at the Bastille and again in Santa Fe — as we encountered an entire new sound world wrapped around a strikingly intelligent and challenging libretto (by Lebanese writer Amin Maalouf), with graceful writing for voices, especially Dawn Upshaw, and a striking production by Peter Sellars, America’s gifted enfant terrible.

Prior to “L’amour,” Saariaho had enjoyed modest success as a concert composer, but based on this one work, she became a major star in the opera world. It was followed in 2006 by “Adriana Mater” at the Bastille. “Adriana,” like “L’amour,” was a collaboration with Maalouf and Sellars. Although it never enjoyed the widespread success of “L’amour,” “Adriana” dealt with powerful themes of wartime rape and forgiveness in ways that made it dramatically gripping, and it continued to use the imaginative musical language pioneered in “L’amour.”

With this background, the arrival of Saariaho’s third opera, “Émilie,” was widely anticipated. The premiere, last year in Lyon, France, was conducted by Kazushi Ono, a guest conductor of the Atlanta Symphony Orchestra only a few weeks ago. After stops at Amsterdam and London, “Émilie” arrived in Charleston last weekend for its American premiere (photo above) as part of Spoleto Festival USA. This all-arts jamboree runs through June 12.

Saariaho’s unique sound world is built around rich textures from the orchestra, in this case a chamber group of fewer than 30 musicians, augmented subtly and in innovative ways by electronics. She has a very French approach to the latter, learned from years of work at IRCAM, the French institute for electro-acoustic studies with which she has been associated for years (she lives in Paris now). Her big influences are probably also the greatest French composers of the past half-century, Pierre Boulez and Olivier Messiaen.

“Émilie,” also written with Maalouf, is a one-person monodrama — a solo opera — about the Marquise du Châtelet, a pioneering physicist and mathematician who was the mistress of Voltaire. Over the course of almost an hour and a half, she muses about her great loves, both Voltaire and another man, with whose child she is pregnant. She has premonitions of death (the real Émilie died five days after birth), but her biggest concern has to do with unfinished work.

It seems operatic enough. But it doesn’t really work.

There are several problems. For one thing, it’s hard to get sustained dramatic effect for such a long time solely from a reflection on scientific work and on the contemplation of death. And a monodrama this long — it may be the longest ever, at least by a well-known composer — is really hard to pull off. The biggest problem, though, is that the score simply lacks variety. For whatever reason, the variations in each of the nine scenes are so subtle as to pass unnoticed. Saariaho’s techniques — which include an amplified harpsichord for period effect, lots of string trills, a range of percussion and real-time electronic modifications so that the soprano soloist can sing a duet with a baritone version of herself — are repeated endlessly, and the whole thing felt dark and uninspiring.

“Émilie” was written specifically for Finnish soprano Karita Mattila, who sang the premiere and subsequent European performances. At Spoleto, however, we got the renowned American Elizabeth Futral. The role shows off her beautiful, secure upper voice very nicely. Because of its length and demanding tessitura, it must take a toll, but Futral never lost focus. And she is a riveting, beautiful presence on stage, even if she didn’t bother trying to look pregnant.

The always dapper and often prickly Gian Carlo Menotti, who died in 2007.

The orchestra here is a group of very young and very talented musicians brought together just for the festival, and they handled this demanding score with great skill and composure. John Kennedy, a conductor-composer and a great advocate for new music, conducted with a sure hand. A new production was created specifically for Charleston by director Marianne Weems. Simple but elegant, it consisted of various platforms and shapes onto which projections were lit.

As usual, there are a total of three operas at Spoleto this year, the most popular being Mozart’s “The Magic Flute.” I managed to catch “The Medium,” written in 1946 by Gian Carlo Menotti. Menotti was a co-founder of Spoleto, of course, and his works have always been prominent here. A favorite of student productions, they appear rarely among professional companies and have not aged well, in part because the emotional drama is a little hackneyed. This lively production made as good a case as one might make for “The Medium,” which in its heyday was nationally telecast and seemed poised to spark a trend for American opera. But this production failed to garner a standing ovation, usually as automatic at Spoleto as in Atlanta. I had always wondered what it would take in these parts for something not to get a standing ovation. With an opening-night audience that included many local dignitaries, the verdict might have had less to do with the opera itself or the performance than with the late Menotti, who quit the festival with hard feelings all around.

One thing about Spoleto Festival USA is that it complements Atlanta perfectly. Atlanta has a great symphony orchestra, which Spoleto does not — great orchestras must be built over time, not in a few intense weeks of rehearsal. But Atlanta’s weaknesses are Spoleto’s strengths. Chamber music is sparsely heard in Atlanta but is everywhere at the festival, with Osvaldo Golijov, no less, as the summer’s composer-in-residence. Atlanta is still struggling to build a full-scale opera company and to get beyond the most basic repertoire, but in a few days at Spoleto you can hear three operas, and none of them are ever “standard” productions of warhorses.

Musical theater also thrives here, as do the kind of hard-to-categorize works that combine music with dance or acrobatics or circus acts — what the French call “spectacles.” Spoleto is America’s most European festival. Indeed, many of the things you see here are borrowed from Europe. And Charleston in early summer is a great place to visit and a great place to eat, rounding out the season perfectly.