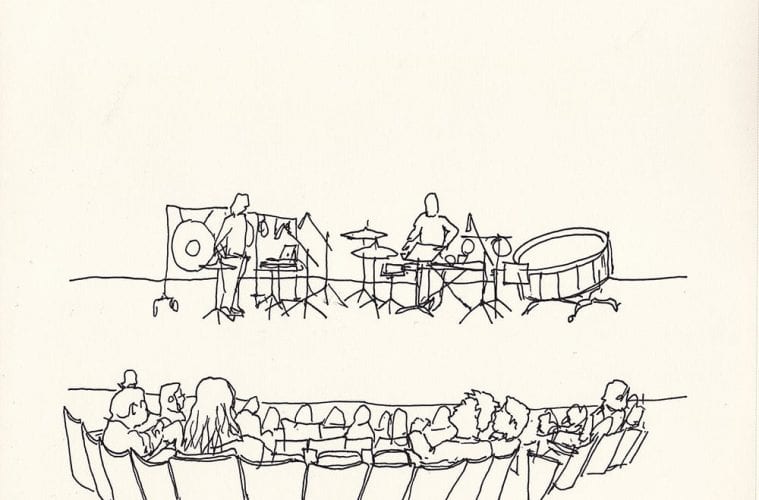 “Sound Worlds: the Sonification of the Japanese Garden” sacrificed structure for chance

The GSU ensemble collaborated with Berlin-based sound artist Michael Fowler to conceive and execute the program, which included two of Fowler’s works. Despite the thematic unity of the evening’s pieces, a performative distinction exists: Fowler’s pieces all centered on computer-based manipulations, while John Cage’s “Ryoanji” (1983) and Toshio Hosokawa‘s “Vertical Time Study II” (1993–1994) are both scored for live performers only. Despite the adventurous, often experimental music that Bent Frequency explores, the computer-generated aspects of the evening were what fell flat, tending to deliver novelty over compositional strength. Put another way, the looser, more improvisational works seemed less like a planned garden and more like an overgrown plot hedged by urban space.

From 1982 and 1992, John Cage composed a suite of artwork — visual and musical — based on the very famous dry rock garden at the Japanese Zen temple Ryōan-ji. Cage “had the good fortune to attend Daisetz Suzuki’s classes in the philosophy of Zen Buddhism at Columbia University in the late forties,” and his work was strongly influenced by Zen and Japanese culture. Bent Frequency performed “Ryoanji” for oboe, percussion and flute. It is an austere, spacious, patient piece of music, consisting of a very slow, steady striking of a muted drum/gong, with oboe and flute playing glissandi. Its empty space and emphasis on relationships between just a few sounds reflects the dry rock garden’s form: a few rocks scattered across a rectangle of white pebbles.

Cherry blossom at the rock garden of Ryōan-ji Temple in Kyoto, Japan. (Photo by Didier Moïse courtesy of WikiCommons.)

Most reviews of the work describe an Orientalist listening experience that sweeps you away to the garden (or, to an idealized version of it).

It is doubtful that, with “Ryoanji,” Cage merely intended for listeners to find bliss through musical transport to a Zen garden. Bent Frequency’s skillful, disciplined rendering did create a clear mental space, not by facile sound painting but by the interplay of Stuart Gerber’s measured, calmly insistent playing with the semi-improvised interpretations of Cage’s graphic score by Sarah Ambrose (flute) and Sasha Shatalova (oboe). In contrast to the lazy idea of narrative “landscape music,” in which the listener reclines, as on a chaise lounge, and is taken there, listening to “Ryoanji” required effort: but effort paid off by the end of the 17-minute performance. Cage notes that the structure of the flute/oboe glissandi should match the smooth rising falling of natural processes, rather than glissandi as performed musically.

Many of Cage’s compositional techniques evidence a lessening or loosening of the composer’s authority or control over the music composed: the glissandi technique is designed to make the performers bound not by their training but rather by attunement to nature, the instruments for “Ryoanji” were selected by chance, the score itself is based on outline drawings of randomly chosen rocks, etc. Cage’s most famous piece, “4’33”,” removes the composer completely, leaving the listeners to find the music by their own observation. Such approaches are, of course, something of a wink at non-control, since the composer makes the choice to use chance, and the audience remains the passive recipient. That is, if Cage’s goal was to remove himself from the process of composition then he simply should have . . . stopped composing.

Fowler’s “Otoniwa,” a work for 8-channel electronics and live instruments, enters some of the same chance/composer-reduced territory. The piece employs field recordings from the Sesshutei garden at the Joeiji temple in Yamaguchi, and audiences members were asked to navigate to a sound-producing website on their phones and to play rocks, sticks and bells, to contribute to the all-room sound. Audience involvement created uncertainty, chance and a necessary reevaluation of the listening process. Since the sounds were all around, and changing, I wanted to get up and move around: which of course one would feel freedom to do in a garden, though not in a concert hall. The fact that the sounds were coming from all around, and from dozens and dozens of audience members often caused me to forget there were even performers on stage. It was successful at engaging the audience, although somewhat amorphous and unclear, musically. The second half of the evening was devoted to one work by Fowler, “Sesshutei as a Spatial Model.” Gerber and Fowler played a range of percussive instruments, and the composer live-processed sounds which were amplified across speakers all around the auditorium. For this piece, Fowler told me that on stage he chose sound files for each of the pieces in real-time, “because of the idea of the electronic musician being an ‘otoniwashi’ or sound gardener, ‘planting’ sound within the space and ‘feeding’ them with other instrumental sounds.”

Fowler has written extensively on Japanese gardens, and utilizes Formal Concept Analysis, architectural theory, computer modeling, eco-structuralism and other approaches both in his research and composition. “Sesshutei” is a transmediation (“when a sign system in one media is reappropriated into another”) of a specific Japanese garden into music. The composer gathered sound samples from the garden, and also “extract[ed] pertinent spatial acoustic data that could be re-mapped to drive processing engines that transformed those captured soundfiles.”

As a listener, I found it easier not to consider whether or not the resulting music bore any clear relationship to the source garden. First: I haven’t visited the garden, so how would I know? Second, the mechanics of translating the sound/spatial data of the garden into the musical representation involve myriad decisions by the composer, and thus the music could not be heard as a literal or narrative retelling. Finally, I am not a good listener when I have to take in a large amount of complex theory just to get to the garden gate. Instead, I found it more useful to view Fowler’s approach in contrast to Cage’s, in the sense that Fowler’s garden isn’t one reached through a certain kind of concentrated attention on an austere minimal composition. Instead, “Sesshutei” sounds like the front end of attention, the mind before it begins to apply categories and preferences on an experience. In connection with this approach, it is useful to consider what a Japanese garden actually sounds like (as opposed to the theoretical soundscape envisioned with reference to ideals of garden-making and the sort of highly abstract and “pure” Zen promulgated by D. T. Suzuki).

One listener has noted at his encounter with the Ryōan-ji soundscape that:

[t]his was not the spacious Ryoanji of John Cage, far from it. The keynote of Ryōan-ji from this one-off visit was the continuous hubbub of voices, primarily comprised of aloud stone counting in Japanese, quickly blending into a murky mush. The wooden hōjō was highly absorbent, and the raked gravel scattered the voices in myriad directions, so the utterances were not sharp or prominent unless close up. [. . .] I heard birds singing and calling, until a helicopter split through the scene. John Urry’s “tourist gaze” (Urry 2002) was made audible with the rapid bleeping of digital cameras capturing the most photographed set of stones and raked gravel in the world.

Fowler’s “Sesshutei” as performed on Friday evening was complicated, murky, filled with densely loud low tones, bells, computer-made nightnoise and creeping, static like fine rain. In terms of an actual garden, then, this work captured the complexity of our perception of a place heavily contextualized by Japanese culture, history and Buddhism. Many of the live-processed sounds were similar to garden-variety granulation, a somewhat tired contemporary performance technique. The piece ran 35 minutes, with only two performers on stage (one of whom was often working on a laptop), which seemed too long for the musical ideas at play. But, it was play, after all, largely improvised. I found myself wanting the composer to prune a bit more carefully. This piece was originally conceived just for the electronic musician, here adapted to include one percussionist. It was curious that a week-long collaboration between Fowler and Bent Frequency led to just one musician from Bent Frequency performing during the evening’s showpiece.

The Zen that D. T. Suzuki transmitted to the West — nonrational and purportedly synonymous with Japanese-ness — has been questioned by some scholars (see especially “The Zen of Japanese Nationalism,” Robert Sharf, in Curators of the Buddha: The Study of Buddhism Under Colonialism, edited by Donald S. Lopez, and here and here and here). Shoji Yamada writes of the reverse Orientalizing of Ryōan-ji, describing the process whereby a garden little noted by Japanese became the most famous Zen garden in the world only after it was extolled by Westerners.

In the sampling of pieces about Japanese gardens performed, one sees some of this same reverse Orientalizing in Cage’s use of gardens as a deep fount of spiritual inspiration in contrast to Japanese composer Toshio Hosokawa’s “Vertical Time Study II,” a musical analogy to walking through a Japanese garden. Hosokawa’s piece was, in a sense, the most “traditionally Western” piece: performers playing composed music. As against the calm, mystical exoticism of Cage, Hosokawa’s work is intellectual, dynamic and tightly organized. The careful aural pairing of deep bass from plucked piano strings with low rumbles from saxophone, the latter producing percussive throbbing and the arrangement of sound episodes, with instruments largely in sympathetic complement, felt wholly different from the “idea” of Japanese-ness as nonlogical (chance, improvisation) presented by Cage and Fowler. I was by this juxtaposition reminded of the soundtrack to the film, The Last Emperor. For music intended to accompany an Asian storyline, the Western composer David Byrne created somewhat cliché “Chinese” style music, while the Japanese composer Ryuichi Sakamoto crafted much more typically Western film music (orchestration, harmony and so on).

In the relatively slow-moving world of chamber music, live processed sound using computers on stage is still a new compositional technique. In addition to opening a door to improvisation, it offers a fertile field of sonic possibilities. However, there is also a tendency for composers to meander overlong in repetitive algorithmic processes, resulting less in a composed piece of music (no matter how technically detailed the programming work) and more in seeming novelty. Since a garden is by definition a cultivation, the works performed in this program that involved live processing seemed to miss the mark by too much loosening of musical structure in favor of sonic chance.