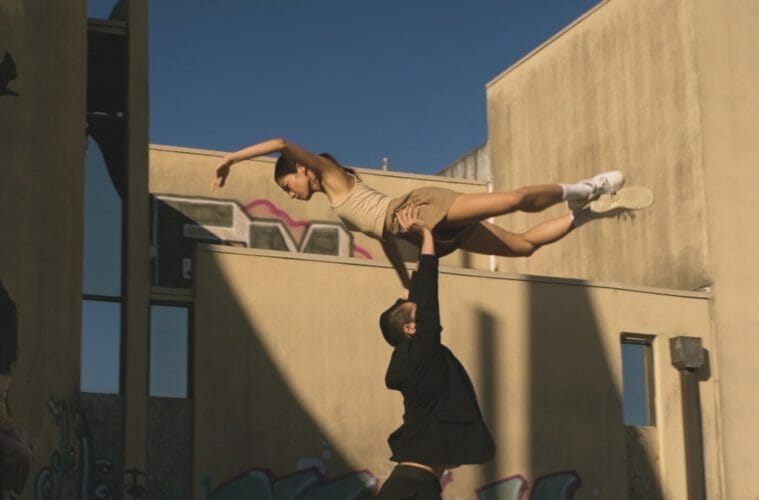 Atlanta Ballet's Guilherme Maciel and Fuki Takahashi in the online film "All Eyes Forward," available for viewing through September 28 (Photos by Noah Osuna)

Ensemble member Leier co-founded ACC with fellow dancers Charlotte Nash and Madeline Bez to “learn and engage in projects surrounding climate action.” In Art to Action, ACC offers an evening-length program of new work by six artists from across the United States and Canada. As the finale contribution, “All Eyes Forward” draws on familiar symbolism to personify what Kane sees as a relationship between “order/industrialism” and “chaos/nature” in contemporary conversations about environmentalism. Kane says she wanted to “convey that the relationship of human versus nature should be one of symbiosis.” Although “All Eyes Forward” does achieve synthesis between the binaries with which it begins, the dominant trope of an industrializing, masculine order conquering a chaotic, feminine nature continues to haunt the piece. 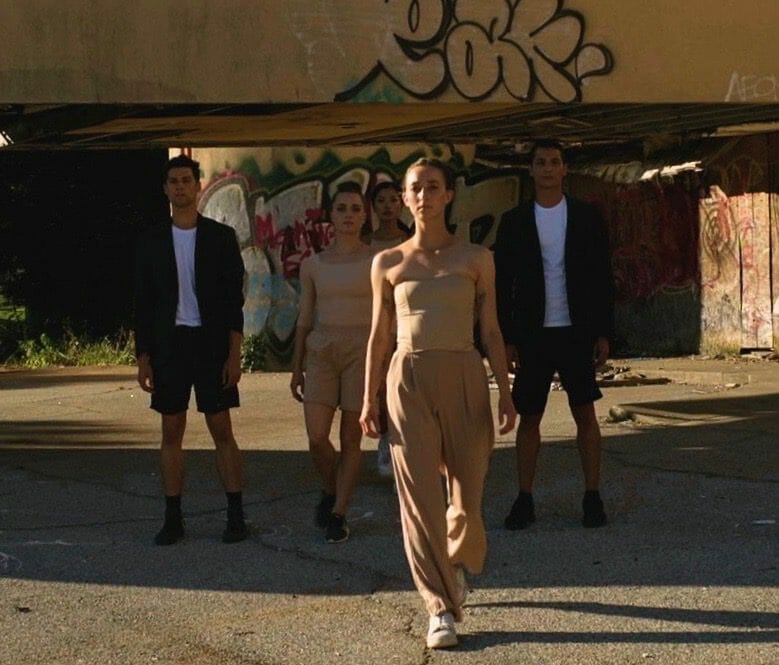 Jacqui Hinkson (second from right) leads the group in this moment from “All Eyes Forward.”

The territorial conflict between industrialism and nature at the heart of “All Eyes Forward” plays out on the site of a derelict church with Atlanta, the “city in a forest,” as a scenic backdrop. The men, wearing white shirts and black shorts and blazers, enter first. The women enter from the opposite side, wearing fitted tops and loose-fitting shorts or flowing pants in beige tones. Osuna films the men from an angle level with mid torso before pulling back to show the procession of women, followed by a wide shot of the church. A bell tolls in Smith’s score. Together cinematography and music create the impression of opposing teams entering the field of play, or opposing armies joining in battle.

As the bell fades and a piano enters into Smith’s composition, the women briefly elude the men’s efforts to engage them. With gestures of dismissal, they push the men back as winds might scatter leaves. Within the first minute, however, industrialism takes control when the men intervene between the women as they stand in line, the men lifting, the women remaining stiff, unyielding. As the ensemble separates into couples, Kane’s contemporary choreography pulls heavily from traditional ballroom and ballet vocabularies. The dancers’ execution is gorgeous; they create long, stunning lines. The women’s bodies are gracefully pliable. The men direct and lift them seemingly without effort. Nonetheless, these are partnerships that create beauty without intimacy. The dancers frequently gaze past one another, and their embraces are brief and angular.

About three minutes in, nature dramatically slips the leash. Osuna’s camera closes in on Nash and Leeper, backlit by a dazzling sun. Smith provides a crescendo of strings as they rise from a crouched position, turning at last to look one another squarely in the eye. Suddenly, in the distance, Hinkson dashes from the cover of the building courtyard into the weedy parking lot, followed in haste by Takahashi, Maciel and Leier. The tempo quickens, and Nash and Leeper take off after them. In the section that follows, gestural sequences cascade quickly through the ensemble in canon. Hinkson moves into a dynamic solo in the foreground and “All Eyes Forward” closes with the women accepting black blazers from the men and shrugging into them. The ensemble falls into line and walks slowly toward thick greenery at the concrete’s edge. Osuna pans the focus away from them up to the early evening sky. 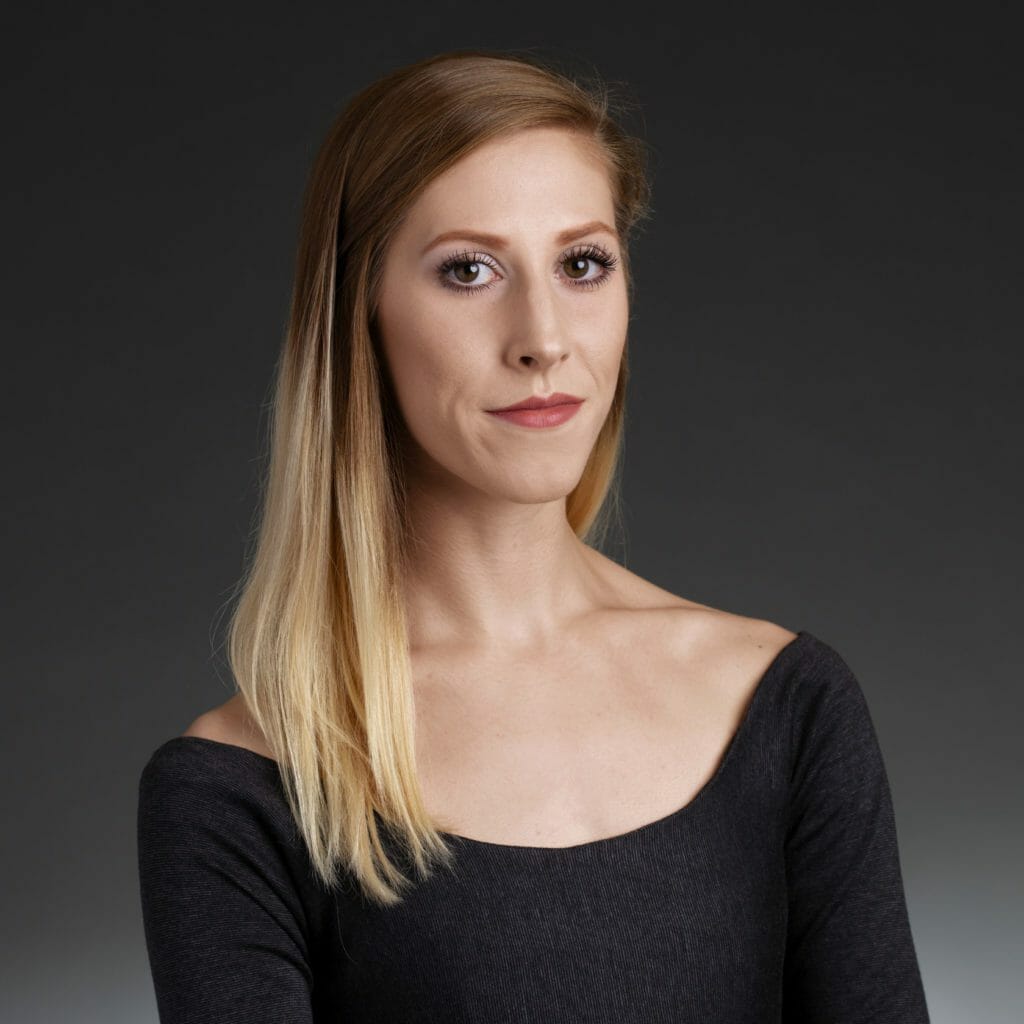 Kane creatively joins familiar symbols and movement vocabularies to layer “All Eyes Forward” with narrative and tell a different kind of story with dance. At the end, though, just as nature briefly gets away from industrialism, meaning proliferates beyond what Kane may have intended. The dancers’ gestures tracing enclosure, and the women’s covered bodies in the final moments, suggest yet another form of dominance and containment of nature by industry, rather than the symbiosis for which Kane seems to have been reaching. Nonetheless, as a work of art, “All Eyes Forward” succeeds in demonstrating the necessity of moving beyond inherited models to think more productively about humanity’s place in the global ecosystem.

On its website, ACC provides a comprehensive program, accessible via a QR code displayed at the beginning of the film. The general quality of the cinematography and editing in the individual pieces and the film as a whole is professional, with a credit sequence at the end of each work. The film includes commentary from the artists, and at the beginning and end, from Nash and Benz. While the commentary is helpful in interpreting the works and understanding the goals of ACC and Art to Action, the onscreen delivery is uneven, and these segments could have benefited from more rehearsal and multiple takes. On the whole, Art to Action is an appealing online program of interesting new performance art that tackles the urgent problem of climate change from multiple perspectives.