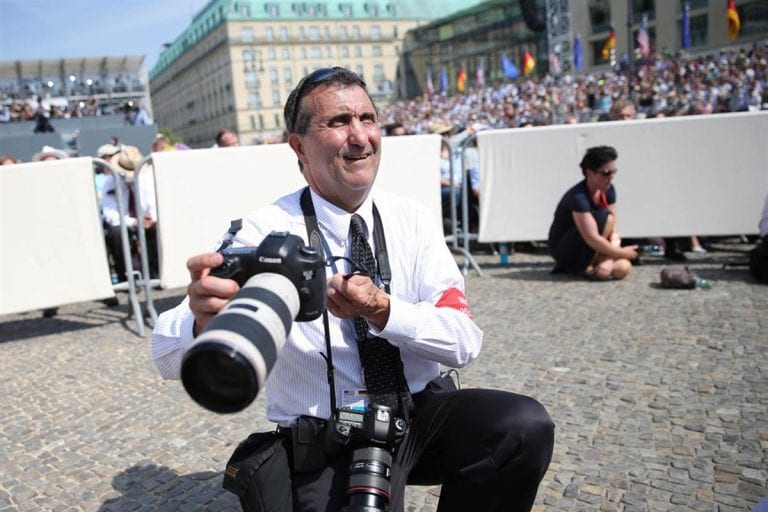 From the Situation Room to post-Katrina New Orleans: a conversation with Pete Souza

As chief official White House photographer and director of the White House photo office during President Barack Obama’s administration, Pete Souza built an archive of nearly two million images that chronicled a series of milestones, from the monumental to the mundane.

Shadowing the commander in chief from locations as disparate as 1600 Pennsylvania Avenue, South Africa’s Robben Island and Buckingham Palace, Souza put in 16-hour days for eight straight years. He was in the Situation Room during the bin Laden mission. And he was on the tarmac during midnight vigils at Dover Air Force Base when the president saluted U.S. forces coming home in flag-covered cases.

In lighter moments, Souza might find himself on date nights with POTUS and FLOTUS, snapping pictures of the bromance between Obama and Vice President Joe Biden or dashing through the snow with Bo, the Obama’s adorable Portuguese Water Dog, on the South Lawn.

And then there are his portraits of children . . .

Some of Souza’s most enchanting photographs were of Obama’s littlest fans as they gazed up at their president from receiving lines or Easter Egg Rolls. Camera poised and always at the ready, Souza documented the time a miniature Spiderman slipped past the Secret Service and tried to entangle Obama in his virtual web just outside the Oval Office. Likewise, the lensman was in the right place at the right time when Sasha Obama hatched an impromptu plot to sneak up on the Leader of the Free World as he toiled at the Resolute Desk.

In anticipation of his appearance at the Jimmy Carter Presidential Library & Museum on October 3, as part of the Atlanta Celebrates Photography lecture series, Souza talked to ArtsATL about his new book, Obama: An Intimate Portrait (Little, Brown & Company, 352 pp); the man he revered as the godfather of White House photography; and his most intimate moment with President Obama.

ArtsATL: Your picture of then-Senator Obama walking on a street in Moscow was prescient. What was it about him that made you think it was important to capture him moving around the world anonymously, with no security and zero fanfare?

Pete Souza: As a national photographer for the Chicago Tribune based in Washington, D.C., I was assigned to cover his first year in the Senate — which kind of turned into his first two-and-a-half years.

Domestically, this was a man who was clearly making a name for himself. He got a lot of attention no matter where we went, and you could see he might run for president some day.

But when we visited Red Square in Russia, no one recognized him. He was a complete unknown.

I knew the opportunities to take pictures like these were going to disappear if, in fact, he ran for president or was elected. So that was definitely in the back of my mind when I was taking that photo.

ArtsATL: Everybody can cite a Pete Souza picture that lights them up. What lights you up when looking through your lens?

Souza: [Laughs] I am always trying to make a photograph that captures the essence of what’s taking place. Sometimes, it’s a great moment of interaction. Sometimes, the light is just beautiful. Sometimes, it’s the composition. And every once in a while, all three of those come together and there’s like this magical moment that takes place that you can’t really repeat.

ArtsATL: I imagine getting to work in the Oval Office was pretty magical for the rich natural light alone.

Souza: The lighting is actually kind of flat in the Oval Office, especially when the President is sitting [far from any windows] in a meeting.

But when he’s around the desk, depending on the time of day or time of year, the way the sunlight comes in the window gets really interesting and you can get some really exceptional pictures in that space.

ArtsATL: You were a photography professor at Ohio University when Robert Gibbs called and offered you the job as chief White House photographer for President-elect Obama. Is it possible to teach not just the mechanics of getting a beautiful photograph, but the art of it?

Souza: You can teach some of the basics about composition, lighting and technical aspects — which are very important. But ultimately, any student is going to have to figure out a lot on their own. You do that by taking photographs and having people critique your work coupled with self-critiques.

I think you can help teach the art of photography. But a lot of it is really up to the individual to carry that knowledge forward and develop their own style.

ArtsATL: Some of your most memorable pictures were not of the president himself, but of people’s expressions in response to him. Do you know when you’ve snapped an iconic picture in real time?

Souza: No. I grew up in a time when you would make what you felt was a good picture, then you’d have to develop the film. It was sometimes hours before you’d know whether you got the picture you thought you got. With digital, however, you can check more or less right away.

Still, you can’t really predict how other people are going to react to an image. That’s the one subjective part of photography: everybody looks at a picture in a different way.

Yes, there are certain pictures that appeal to people across a broad spectrum. But I can’t say I ever know when I’ve taken what you might call an iconic photograph upon clicking the shutter.

ArtsATL: What was it about the chemistry between President Obama and Vice President Joe Biden that made them such compelling subjects?

Souza: A big part of Obama’s presidency was his relationship with Joe Biden. I photographed them every day, and that relationship features very prominently in my book. I saw more of them together than I did of the president and Michelle.

Biden doesn’t hold back his emotions . . . he engages with people very directly. He was a good subject. He’s a little older than President Obama, so there was kind of like an older-brother-type relationship.

I don’t think they knew each other that well before coming into the White House, but they had a very solid relationship that, I think, became a solid friendship.

ArtsATL: How did you manage to catch Sasha in the act of sneaking up on her dad while he was focused on work?

Souza: People have only seen the one picture where Sasha’s hidden behind the sofa. It’s the perfect example of a kid being a kid, and I have a four-picture sequence of that whole scene in my book.

But you can’t depend on an aid to call and say, “You might want to come upstairs . . .” under such circumstances because it would already be over by the time you arrived. So I was always lurking around, which, I think, is why I have all these incredible, once-in-a-lifetime interactions.

It wasn’t that I just happened to be there [for the Sasha photo]. I was there every day, pretty much for eight years.

ArtsATL: The tables were turned when Nat Geo trailed you with a camera crew for their documentary The President’s Photographer. Was the experience unsettling for someone who’s not accustomed to being the focus of attention?

Did it give you greater empathy for how POTUS and FLOTUS handled themselves under similar circumstances?

Souza: It’s not an easy thing to have someone photograph you all day, and it certainly took the Obamas a while to get used to it.

I didn’t want to cooperate with National Geographic initially, but everybody at the White House thought it would be a good idea and good for the President as well — so they convinced me that I should be a willing subject.

I don’t like being on that side of the camera. If you look at my Instagram feed, you can probably count one or two times when there’s a picture of myself. It’s definitely an uncomfortable feeling having someone trail you around. But [Nat Geo was] great about it, and they did a great job.

The documentary included a lot of past photographers and their work — my predecessors. I just happened to be the guy who was the main focus of the documentary.

ArtsATL: One of your predecessors, Yoichi Okamoto, is known as the godfather of White House photography. What does he mean to your very small fraternity?

Souza: Oke [President Lyndon Johnson’s nickname for Okamoto] was what a lot of people call the first White House photographer — which is not really true. Kennedy had two military photographers, though their access was hit-or-miss in terms of what they actually covered.

But when LBJ became president, he hired Okamoto and agreed that he would have access to everything to truly document the presidency for history. [Oke] was the first one to do that, and he did it so well that every subsequent chief White House photographer has been trying to reach his bar.

Oke (pronounced Oki) also had a character in LBJ, who would let his photographer do all kinds of crazy things — like come into his bedroom while he [Johnson] was still in bed, and things like that.

For me, Okamoto was the guy whose work I always tried to live up to. He showed how it should be done. I think we’re all trying to emulate him in some ways.

ArtsATL: For better or ill, is there a picture, circumstance or subject that sticks with you from your time in politics, Afghanistan or New Orleans post-Katrina?

Souza: I think they all stick to me. They’re part of my life and who I am. Who I will be — in the future, as a photographer — is based on experiences that I’ve had.

Any photograph brings me back to that time and what I was feeling as that whole situation was unfolding — whether being in the Situation Room when the bin Laden mission was unfolding. Or, back in the Reagan days, when Princess Diana was dancing with John Travolta. Or being outside of Kabul, Afghanistan, when B-52s were dropping big bombs.

ArtsATL: What moment stands out to you as the most intimate shared with President Obama — whether or not any words were exchanged? What new understanding did you have of him in that moment?

Souza: [Laughs] I guess I would say when he hosted my wedding in the Rose Garden.

Even though it was in front of 35 people, it was still a pretty intimate moment for President Obama to be talking about me at my wedding. I think I realized that his doing that was his way of appreciating what I do. He never said that, but it’s not every day that the President of the United States hosts a wedding for a member of the White House staff.

ArtsATL: Who did you choose to photograph your wedding in the Rose Garden?

Souza: I was trying to figure out a way I could set up a bunch of remote cameras and do it myself, but I didn’t think my wife would like that. So one of the photographers who worked for me was there to document the President’s participation in my wedding.

ArtsATL: You’ve used archival pictures from the Obama Administration to offer very quiet but pointed commentary on 45’s leadership. Why?

Souza: Here’s all I’ll say to that: I’m now a private citizen, and I think my Instagram [@petesouza] feed speaks for itself.