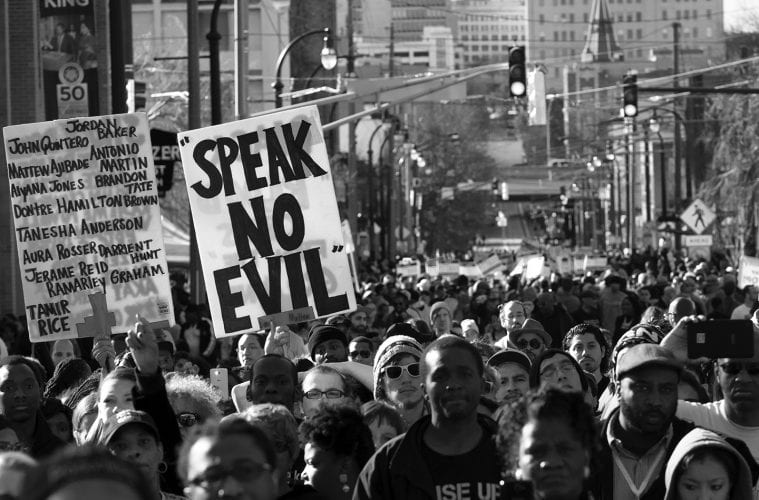 When protests broke out in Ferguson, Missouri, after Mike Brown was shot by police officer Darren Wilson, Atlanta-based photographer Sheila Pree Bright says she knew exactly what she had to do.

“I felt like I needed to go to the ground to see what’s going on,” says Pree Bright. “When I got off the plane, I could feel the tension in the air. When I was on the ground with the young people, they said they feel like they’re fighting the same fights that their parents and grandparents fought.” That trip to Ferguson was the start of #1960Now, a collection of protest photography and portraits of activists from the 1960s and today. It’s an effort to provide a crucial missing narrative link between movements of the past and the present. Pree Bright’s photos have now been collected into a book by the same name, which features an introduction by Black Lives Matter cofounder Alicia Garza.

“I wanted to go for myself as an artist,” says Pree Bright of that instigating journey. “As soon as I got on a plane, something else would happen. I never knew that this body of work would evolve in the way that it has or that I would have a book.”

Pree Bright’s portraits of Atlanta civil rights leaders from the book will be exhibited at Arnika Dawkins Gallery, October 14–21, and the gallery will host a free book signing and talk with Pree Bright on Sunday, October 14, from 3 p.m. to 5 p.m. The exhibition is part of a partnership with renowned photographer Hank Willis Thomas’ For Freedoms – 50 State Initiative and the City of Atlanta Mayor’s Office of Cultural Affairs ELEVATE public art festival, which takes place in Southwest Atlanta this year.

Pree Bright, who refers to herself as an “actionist” rather than an activist, often uses her lens to capture images of those whose voices are muted in this country.

Pree Bright spent her early years in Germany because her parents were in the military, and the family moved from place to place every few years. Seven years after getting her undergraduate degree from the University of Missouri, she moved to Atlanta to get her MFA from Georgia State University. She garnered national attention for her Plastic Bodies series, which features real women’s bodies and faces meshed with those of Barbie dolls. In her Young Americans series, she interviewed and photographed young people with American flags to ask them their opinions about the state of the country. Her work has been featured in exhibitions at the International Center of Photography Museum in New York, the Smithsonian Museum of African American History & Culture in D.C. and the High Museum of Art, among others. Dr. Roslyn Pope, 2013, member of the Atlanta Student Movement, author of the “Appeal for Human Rights” at Spelman College in the 1960s, Atlanta GA

When she started #1960Now, protests took her all over the country from Atlanta, Ferguson and Missouri to Washington, D.C., Baltimore and Baton Rouge. But Baltimore, she says, is the place that sticks with her most. “When I went to Baltimore, I felt like I was in a third-world country,” she says. “People are living in houses where there are roofs caved in. Can you imagine being a child in that environment?”

Another thing that stood out to her in Baltimore was the generational divide between the civil rights protesters of the 1960s and the young people of today. Lonnie King, a co-founder of the 1960s Atlanta Student Movement whom Pree Bright had photographed, provided her with some insight. “He said to me ‘We failed your generation. We didn’t talk about the civil rights movement because we were hurt, we were killed, had acid thrown on us, and wanted to protect the next generation.’ He said that his generation was so violated by what they experienced that they thought they were protecting the next generation by not sharing their traumatic stories.” But that effort to protect can lead to a disconnect between the struggles of the past and the present. “When a black body is born, they’re born into a movement whether they’re conscious of it or not, and it’s called the Black Liberation Struggle,” she says. “It’s a perpetual revolution. The same thing happening then is happening now. As a country, we know about the problems, but how can we move forward? I think it’s going to take the young people to push that.” Educating and empowering young people, connecting the movements past and present, has become a pivotal part of her mission as an artist. In addition to the exhibition at Arnika Dawkins, her protest photos are also on display in an exhibition called Radical Lens at Clark Atlanta University Art Museum through May 31, 2019.

She’s also working on a public art project through WonderRoot’s Off the Wall program, a social justice public art initiative to place civil rights-themed murals around the city in advance of the Super Bowl. She recently flew the mothers of Eric Garner, Tamir Rice and Oscar Grant to meet eight African American women in Atlanta whose children have been killed by police here. The shot she took of the mothers will be on a wall in Atlanta next to a 1963 image by Richard Avedon of activist and politician Julian Bond and his daughter with Student Nonviolent Coordinating Committee (SNCC) members in Vine City.

“I’m in it, and I can’t go back,” says Pree Bright of her work. “There are tons of stories that I could tell you that I can’t tell you. But I can tell you it has changed me. Even though these are protest images, I want people to learn from this. I feel I cannot change anybody, but I am the messenger.”