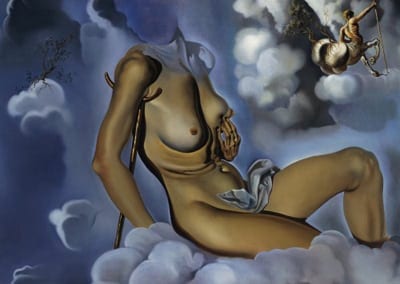 Review: Mixing science, religion and showmanship in “Dalí: The Late Work” at the High Museum

Long before Lady Gaga, there was Salvador Dalí.

In the years after World War II, Dalí did for art what Lady Gaga does today for music, mixing personal flair and painting so seamlessly that it was impossible to imagine the art apart from the showmanship. It was, as the video in the High Museum of Art’s current exhibition says, hard to tell what was showmanship and what was sincere. Possibly, as with Lady Gaga, the two go together. “Dalí: The Late Work” is the first serious re-examination of a body of work that the public has always loved and art historians long dismissed as kitsch. The exhibition surprises us productively, revealing an artist who ought to disturb us in many useful ways.

Dalí was a mischief maker from the start, and he was thrown out of the Surrealist movement in 1938 for conceptual and political heresy. The same year, like a good Surrealist, he visited Sigmund Freud in Freud’s London exile to ask hero-worshipping questions about the subconscious. Less than three years later, Dalí exhibited paintings that he proclaimed were a “return to classicism” but that seemed as wedded as ever to subconscious associations.

That 1941 exhibition is where the High’s show begins, give or take a few earlier paintings that set the context. It is also where art historians until recently ended, writing off the later Dalí as a hopeless case.

After his move to America from a war-torn Europe, Dalí was unabashedly interested in money, and his chief adversary, the arch-Surrealist André Breton, rearranged Dalí’s name to “Avida Dollars.” Dalí grew his mustache to such a fetishistic length that Philippe Halsman produced a book of surreal photographs featuring it. “Dalí’s Mustache,” parts of which are reproduced wall-size at the beginning of the High’s exhibition, carries on its back cover the warning, “This book is preposterous.” (Copies of Halsman’s compact charmer are for sale in the exhibition shop, alongside the High’s groundbreaking and totally unpreposterous catalog.)

Dalí announced early on that mathematics and science had led him back to Catholicism, without faith. (“I know … God must exist, but I don’t believe it.”) Thus he came to paint such events as the Virgin ascending to heaven on what he called “the strength of her antiprotons.” His self-proclaimed “nuclear mysticism” is a provocative mix of piety and pseudoscience, refined more outrageously every time Dalí read of a new subatomic discovery.

This physics-driven producer of visions is the Dalí who embodied 1950s flamboyance and prefigured the pastel lightheartedness of Pop Art: “The Maximum Speed of Raphael’s Madonna” deconstructs Raphael’s Virgin Mary into a swirl of spheres and rhinoceros horns. (The multiple meanings of the rhinoceros horn for Dalí is one of those places in his work where science meets psychoanalysis and religion.) But there is no nuclear deconstruction in the monumental “Christ of St. John of the Cross,” on loan here from Glasgow and recently voted “Scotland’s most beloved painting.” Based on a sketch by the Spanish mystic of the title, this Christ floats against the cross more than being nailed to it, and hovers weightlessly above a landscape that reproduces the view from Dalí’s window in the Catalonian region of Spain. Dalí’s devotion to Catalan national identity deserves to be better known. A painting in the exhibition that honors the mathematical mysticism of a 16th-century follower of medieval Catalan philosopher Ramón Llull is both Catalan celebration and a unique piece of science-meets-religious history.

One reason for Dalí’s appeal to a wide public is his technical skill: his version of classicism approaches the shinily exact rendering of a later generation’s Photorealist painting. This stylistic facility, along with his fame, led to portrait commissions by wealthy patrons. Remarkably, Dalí often made fun of his wealthy subjects, posing them in a gold toga or distorting their facial expressions. In stunning contrast, his 1961 “Portrait of Mrs. Chisholm” depicts a transcendently composed, evening-gowned woman set against a placidly surreal landscape.

Over the decades, Dalí’s inspired blend of silliness and serious experimentation went far, far beyond his famous melting watches of the 1930s. He asserted in the 1960 video “Chaos and Creation” that not only could computers make geometric art, but gestural abstraction could be made by pressing a canvas over a motorcycle. He incorporated the Ben-Day dots used in image reproduction into his paintings several years before Roy Lichtenstein began enlarging panels from the Sunday comics pages. In the early 1970s, Dalí produced “First Cylindric Chrono-Hologram Portrait of Alice Cooper’s Brain,” with the singer covered in jewels and brandishing a Venus de Milo microphone. When not engaged in such feats, Dalí perfected the cult of artistic celebrity, and inspired Andy Warhol in one generation and Jeff Koons in another. Koons in particular seems to have realized that even unquestionable kitsch can be elevated to high art if undertaken with a sufficient degree of sobriety.

Koons will deliver a lecture on Dalí at the High on October 5, and that is just one element of the museum’s multi-layered contribution to the re-visioning of art history this autumn. Check out the film series and the deliberately entertaining schedule of events that begins Saturday night with a “Surreal Soiree.”