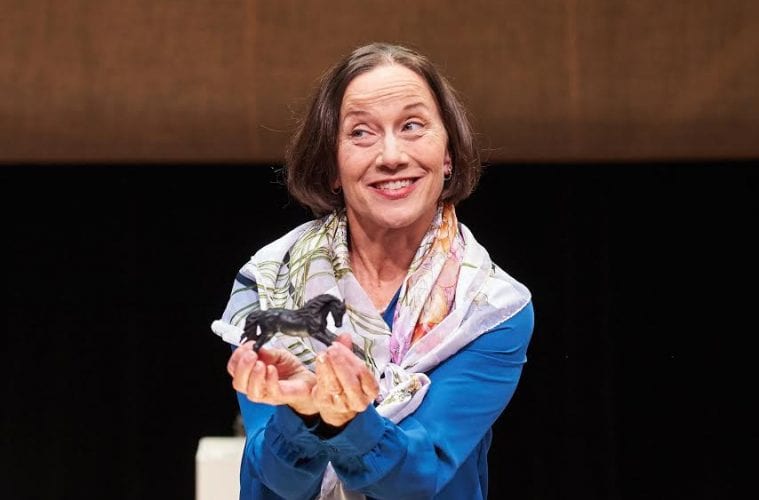 One day she’s onstage portraying Joan of Arc, then another she has morphed into a Shakespearean character. Sometimes she even tackles multiple roles in the same show such as in Horizon Theatre’s The Syringa Tree or the recent Angels in America at Actor’s Express, where she brought to life Hannah Pitt, Ethel Rosenberg, Rabbi Isidor Chemelwitz, Roy Cohn’s doctor and more. Over the last few decades, the versatile Carolyn Cook has become one of the preeminent performers around, taking on challenging work in theaters across the city.

Yet, especially of late, she’s also been a prolific director, with gigs such as On the Verge (Or the Geography of Yearning) at Georgia Ensemble Theatre, How to Use a Knife at Horizon Theatre and Miss Bennet: Christmas at Pemberley at Theatrical Outfit. Her new project, which she is directing and writing, is with Theatre du Reve, the French-language theater company that she founded and where she still serves as producing artistic director. Il Etait Une Fois (Once Upon a Time), running through March 25 at 7 Stages’ Backstage Theatre, takes audiences back to Louis XIV’s France and the fairy tale culture of the era.

Over waffles one Saturday afternoon, Cook’s enthusiasm for the new project is undeniable. Once she and the company had decided to proceed with the show, she began her research and dug up lots of information on female fairy tale writers in 17th-century France. “About them I knew absolute zero,” she says. “I thought, I was a French major and I don’t know anything about these people. What’s out there that I don’t know?” She ordered some books and anthologies of fairy tales by women and starting learning all about the salon movement and the fascinating figures of the time. She was pleasantly surprised at how they parallel today’s times.

The fairy tales used here are by the likes of Charles Perrault and Marie-Catherine d’Aulnoy and reflect the politics of the day. For instance, women were prohibited from marrying for love, and Cook learned that the hostesses of the salon used fairy tales to obliquely criticize the patriarchy.

“Many of these stories shifted into the background during the Enlightenment,” says Cook. “They gave voice to the concerns of women, and were written by women. They went away from the canon. I guess I am trying to put them back.”

Over the years, Theatre Du Reve has developed a loyal following and one that has expanded each year. Cook credits that to the adventurous programming the company has chosen — much of that due to artistic associate Park Krausen — and advances in how to translate the language.

“Technology has now allowed us to do supertitles on the set,” says Cook. “Non-French speaking audiences can watch it like a foreign film, with English on the set. That expands access. We have a niche. We do Francophone theater, theater from all over the French-speaking world, but it is accessible. We don’t exclude anyone.”

Cook’s Atlanta career began 27 years ago. She moved to the area wanting to be a performer, even though she had no formal training. After taking part in the Alliance Theatre intern program for two years, she got her first role in 1991 in the company’s A Man For All Seasons playing “a woman”. “I had five lines — and I moved a lot of furniture,” Cook says. That led, however, to Lend Me a Tenor at Theatre in the Square and My Children! My Africa! at 7 Stages. All of a sudden opportunities came her way, including a huge one in 1994 when she became part of Georgia Shakespeare’s annual ensemble.

One of her early highlights was in David Hare’s drama Skylight at Horizon Theatre in 1998. In it, she went head to head with (frequent collaborator) Chris Kayser — and cooked a meal in the process. “We used to say that play was in sensurround,” she laughs. “You could smell the garlic. That was choreography — cooking on stage. On this line, I pick up the knife. And so forth. It felt like practicing a tap dance.” Horizon has been the home of some of her best known and celebrated work, such as Time Stands Still, which won her a Suzi Bass Award for Best Actress.

Other highlights include Actor’s Express’ Blackberry Winter, in which she played a woman whose mother has Alzheimer’s (paralleling the actress’ own similar story) and the Alliance Theatre’s all-local version of August, Osage County, one of the great ensembles in Atlanta theater history. Once Upon A Time stars (left to right): Natalie Karp, Jennifer Schottstaedt and Eliana Marianes

She is thankful to a lot of artists who have helped her along the way. “I am really grateful to [7 Stages founder] Del Hamilton for casting me in My Children! My Africa! and introducing me to the work of Athol Fugard and to the work of what [Horizon Theater artistic director] Lisa Adler calls ‘world issues plays,’ and to Lisa Adler for letting me continue that at Horizon. I can’t say enough either about Richard Garner and the 20 years of Georgia Shakespeare in brilliant classic plays.”

Cook is not new to directing, having done so before moving to the city, but has largely focused on acting while here. After her daughter went to college, though, she felt she had the time and energy to do so.

Angels in America was her last acting role — and the actress does have a dirty little secret from the run. “During [the first half] Millennium Approaching, I was backstage writing this play on my computer. I did not have the responsibility that the others did. I’d be off for 15 to 20 minutes at a time. I had some time, and I had a play to write! I couldn’t write during Perestroika because I had a lot more to do in that one.”

Although the material was intense and on Saturdays the ensemble performed both halves of the play, it was an experience she treasured. “I would be wound up when I got home, but to experience that — the combination of brilliant writing, deeply important material, and a genuinely delightful ensemble — it was a gift. I never did not want to go to work. I was never tired. I just savored it.”

After several projects in a row, she’s due for some time off but has relished what she has been involved with of late.

“I have been on an incredible streak,” she says. “I have loved it. I am excited about this. Conceiving this show — there is something about having an idea and bringing it forward through development that is exhilarating and terrifying.”

Cook carries gratitude for the life she has forged for herself, on stage and in the director’s chair and away from the theater.

“I feel so full and so grateful that I get to do this kind of work,” she says. “For the last week-and-a-half of Angels, I would do a six-hour rehearsal (for Once Upon a Time), leave, drive across town, park my car, go to Actor’s Express, go upstairs and get into my costume. And think, ‘Man — this is the life.’ This is what I dreamed of in theater all the time. And I’m not in New York and I’m not dealing with the crowds and the high cost of living, paying an arm and leg for the place the size of a postage stamp. When I get done tonight, I will drive to my house that has a yard where I have a family — and it’s so the best of both worlds.”