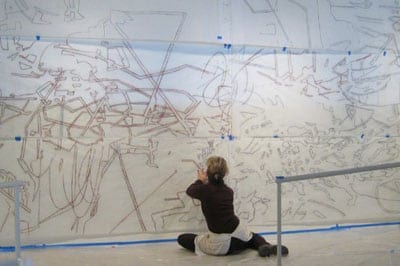 Drawing has long been critical to Rocio Rodríguez’s creative progress, usually as a vehicle to explore ideas for her paintings. The medium takes center stage in her installation in the Education/Resource Center at the Museum of Contemporary Art of Georgia, where her first-ever wall drawing will span the 9-by-25-foot ramp wall through July 3.

The energetic “non-narrative landscape,” as Rodríguez calls it, is a compendium of mark-making — ruled lines, wispy whirling skeins, velvety staccato gestures — created in charcoal. Atlanta photographer Reis Birdwhistell made a stop-action video charting her progress, which accompanies the piece.

Following is an excerpt from my interview with Rocio Rodríguez.

Catherine Fox: Did you come in with a plan, or was it spontaneous?

Rocio Rodríguez: I visited and photographed and sat in the space before starting. Upon seeing the space, I thought of a previous drawing that I had made as a study for a large painting that I never made. I was still interested in that initial idea, so I decided to use that drawing after making some additional changes for the MOCA GA space. So, yes, I did have a plan.

Fox: How did you begin?

Rodríguez: I took that small drawing, projected it on my wall in the studio and made cartoons of the composition. That is what those large sheets of paper were that I taped on at the beginning [as seen in the video]. It was like a large map, mapping the composition onto the wall.

Fox: Why black and white?

Rodríguez: Because I love tonal drawings. I paint and draw in color a lot, and I wanted to simplify but amplify the idea of the drawing in a tonal way, explore those possibilities. I also felt that if it was in color in that narrow space, it would just have been visually confusing. I needed to simplify on some level.

Fox: How long did you work on it?

Rodríguez: Twenty-five hours. After I finished. I didn’t see it for almost two weeks. Two days before the opening I went down there to look at it, and it felt really different. I had an “uh-oh” moment. It felt small. I went home and thought about it. The space had taken over. In the beginning I was imposing it on the wall, but now the space was imposing itself on my drawing. So the morning of the opening I went back and worked on it for two more hours, expanding it a bit.

Rodríguez: It got me out of my studio, and that felt good for a change. It was a good experience. Maybe a cupola next time.