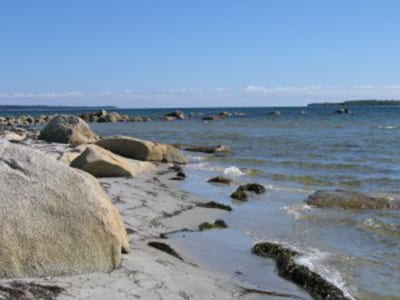 The Riverside Chamber Players performed a matinee concert on Sunday featuring two highly programmatic works: Bedřich Smetana’s String Quartet No. 1 (subtitled “From My Life”) and the world premiere of “I’ve Been to the Ocean” by Brian Dallow. The program took place at the Bridge to Grace Church in Roswell.

Violinists Kenn Wagner and David Dillard, violist Wesley Collins, cellist Joel Dallow and bassist Douglas Sommer opened the program with “I’ve Been to the Ocean.” Yes, there’s a family relationship between composer and cellist: father and son. In addition, the composer’s wife, Rena Fruchter, herself a pianist and author, supplied photographs that were projected on a screen behind the performers.

"Sun, Sand and Water," one of the photographs projected with “I've Been to the Ocean.” (Photo by Rena Fruchter)

The unabashedly tonal work is, in the composer’s words, “a programmatic description in sound of the beach and the ocean of Port Joli, Nova Scotia,” which has been the couple’s summer home for the past 14 years. The music paints five scenes from that shoreline, each with a related photograph from the Port Joli seaside.

Dallow the composer, who was born in 1943, has eschewed the revolutionary theoretical movements of the 20th and 21st centuries in favor of a thoroughly tonal palette, which in its Romantic and often sentimental temperament harks back to a style that can be heard in 1930s Hollywood films. There are nods to impressionistic influences here and there, and in the final movement a few quirky harmonic gestures that have historically come to imply a certain joie de vivre.

The work was well played, and the music afforded each of the upper four voices the opportunity to shine. A depth-extending foundation provided by the contrabass also allowed the cello more flexibility in taking on melodic material while maintaining a lower end to the ensemble’s sonic texture.

A Q&A with the composer took place immediately afterward, where Dallow, who has taught music theory and composition at Rutgers and Temple universities, gently dismissed dodecaphonic methods.  However much a comparative aside that is to Dallow’s own tonal approach, that is an old battle reminiscent of the 1960s and ’70s — hardly an issue today, when the heyday of serialism as a purist theoretical movement is long dead.

Nineteenth-century Czech composer Bedřich Smetana wrote very little chamber music: two string quartets and a piano trio. His String Quartet No. 1 (“From My Life”) was written in 1876, after the composer had experienced the onset of deafness two years before. Its thoroughly autobiographical nature, written out in great detail by the composer, is not necessary to enjoy the music on its own terms.

Like the Dallow piece, the Smetana gives equal opportunity for all the instruments to shine, although the prominently featured segments of the viola part are likely to register with the listener from the very beginning. The composer intended for the work to emulate a small circle of friends having a discussion. Although the à la Polka second movement contained some rough spots, the performance succeeded overall, the ensemble capturing the interplay Smetana intended.

It’s worth mentioning that the Bridge to Grace Church seems little known as a venue for classical music, at least by those who live outside the Roswell area. But its small, multi-use sanctuary works remarkably well for chamber music. Despite the carpet, the wooden platform and ceiling provide just enough warmth and clarity for the audience to smell the rosin, so to speak, in the music. But that also poses a challenge for musicians performing there, because, unlike in more resonant spaces, small mistakes cannot be easily hidden as the musical details are aurally exposed.