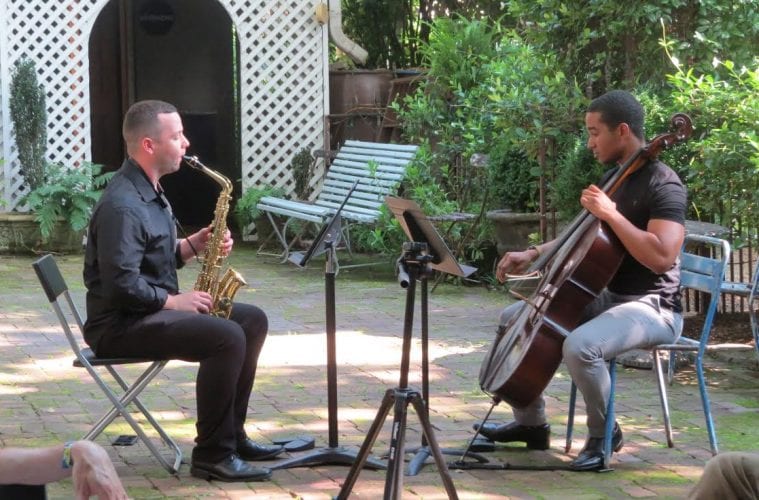 YInMn Blue is an inorganic blue pigment that was accidentally discovered at Oregon State University in 2009. Comprising the metals yttrium, indium and manganese, YInMn Blue is noteworthy for its vibrant, intense color and high near infra-red reflectance rating. That “YInMn” is pronounced “Inman” seems more than coincidental, given it was chosen as the inspiration for naming The YInMn Project, a half-day new music festival that made its debut on Saturday at the Whitespace Gallery located, naturally, in Inman Park. The concurrent closing day of the gallery’s exhibit of visual art by Matthew Heller, entitled “Harmonic Dysfunction,” adds to the fun of naming and proved a fine environment for the eclectic array of music performed in the festival’s engaging six-and-a-half-hour span.

The festival began in the afternoon with an Athens-based duo, Safety Second (flutist Alexis Metrourmeau and percussionist Nick Martinez), who opened their set of six works with “Bare White Bones” (2016) by Wally Gunn, an engaging work for flute and a small but diverse percussion setup. An interesting curiosity among their attractive repertoire was “Lilliputian” for piccolo and music box by Atlanta composer Nicole Chamberlain. Martinez and Metrourmeau have both just completed their bachelor’s degrees at University of Georgia, but the duo has been playing together since May 2017, mostly in alternative venues.

Anther just-out-of-academia performer followed, cellist Josh DeVries from Ann Arbor, who presented his University of Michigan senior recital in April and has been actively applying his craft beyond the confines of study with his viscerally engaging repertoire. DeVries opened with Jimi Hendrix’s 1967 ballad “Little Wing,” as arranged for solo cello by Mark Summer (the original cellist for Turtle Island String Quartet), following it with a Summer original, “Kalimba,” and closing with his “Julie-O.” In between came a clutch of contrasting pieces, including Anna Clyne’s “Fits + Starts” (2003) for cello and fixed media and Mark O’Connor’s “Appalachia Waltz.” DeVries dug into each work with convincing gusto.

The Atlanta-based Terminus Ensemble, formed in 2012 (totally unconnected to the later-established but similarly named Terminus Dance), presented works by its two artistic codirectors, composers Sarah Hersh and Brent Milam. For Hersh’s musical dialogue “Circular Arguments,” saxophonist Brandyn Taylor and cellist Noah Johnson took the performance outside of the sheltered gallery to the small adjacent garden area, inviting the audience to come outside or turn their chairs around. Back inside, percussionist Dominic Ryder then played Milam’s “Lattice II,” joined by Taylor, swapping alto for tenor sax, for Hersh’s “Your Mind is a Maze of Mystery.” Milam was the solo pianist for his own “This Moments Horizon” – a work originally for acoustic grand, which obliged Milam to modify it somewhat for his Korg electronic piano.

Atlanta percussionist Caleb Herron brought forth four works from his long-standing solo repertoire. Two of these, which had conceptual affinities for each other, were Alvin Lucier’s “Silver Streetcar for the Orchestra” for amplified triangle solo and James Tenney’s “Having Never Written A Note For Percussion” (1971) for solo tam-tam. Both acknowledge the acoustical role of the space within which they are played as well as the impact of the listener’s location within that space. Herron encouraged the audience to stand and move about. He closed with Vinko Globokar’s “?Corporel,” a performance piece that strips down the ideal of “suffering artist” to its bare, primal lizard-brain essentials. That required Herron, shirtless, to be both performer and instrument, using his body as percussion and vocalizing sounds in ways that implied self-inflicted pain and mental punishment.

In the penultimate slot came Juxtatonal, a trio from New York City, represented in this performance by two of their members: vocalist Jocelyn Zelasko and cellist Bryan Hayslett. Composer Sarah Hersh got another nod in this festival from their set opener, two movements from her “In Praise of Continuous New Dreams of New York City.” Scattered throughout Juxtatonal’s set, including their closer, were four songs from #nofilter by Michelle McQuade Dewhirst, music inspired by spam emails. Their smartly chosen, occasionally witty repertoire was engagingly performed with smooth transitions between numbers.

The final group to perform was Room 1078, a string quartet from Ann Arbor — violinists Bram Margoles and Cassidy Chey Goldblatt, cellist Hanna Rumora and violist Ryan McDonald. The group had swung through the Atlanta area last June, playing two shows at Caffé Bene in Suwanee and busking on the Atlanta Beltline. In this concert, the quartet established their general bent up-front by opening with the rock-genre-exploring “Chai” by cellist Dorothy Lawson, cofounder of NYC-based string quartet Ethel — from whose repertoire this piece is derived. Among their eclectic repertoire, Room 1078 brought to the table three works by Ann Arbor-based Mormon composer Nathan Thatcher: “Folk Song,” “Zero at the Bone” and “Where the Sacred Begins and Ends.” The quartet closed with “Great Danger Keep Out” (2013) by Matthew Browne, a vital and vigorous glissando-laden work that capped the show with five minutes of bold energy.

The festival ended on time at 9:30 p.m., as every available musician who had performed and was still present performed John White’s “Drinking and Hooting Machine” (1969) on bottles of “a favored drink,” which are blown across in a flute-like manner to produce the tones. The pitches lower as the contents are drunk, until the bottle is empty. The score, read off cell phones, uses the numbers one through 10 to indicate pitch repetitions and their alteration by means of “sip,” “swig,” “gulp” or to leave “as is.” It was a fun, casual way to end the extended day.

The project came to Atlanta because of the quartet’s positive experience performing on the Beltline. “It wasn’t so much that Atlanta was chosen for the YInMn Project,” says Goldblatt, who organized the show, “but that the city inspired this project.” The intimate Whitespace gallery proved exactly the sort of venue she was looking for, a space that had a visual element to complement the aural one; with contemporary art that would complement the project’s program and aesthetic vision.

It was a good choice for the well-organized and deployed YInMn Project, which proved itself a remarkably refreshing addition to Atlanta’s new music community. Hopefully it will return annually. It will be a respectable boon to the city’s flourishing arts scene if it does.