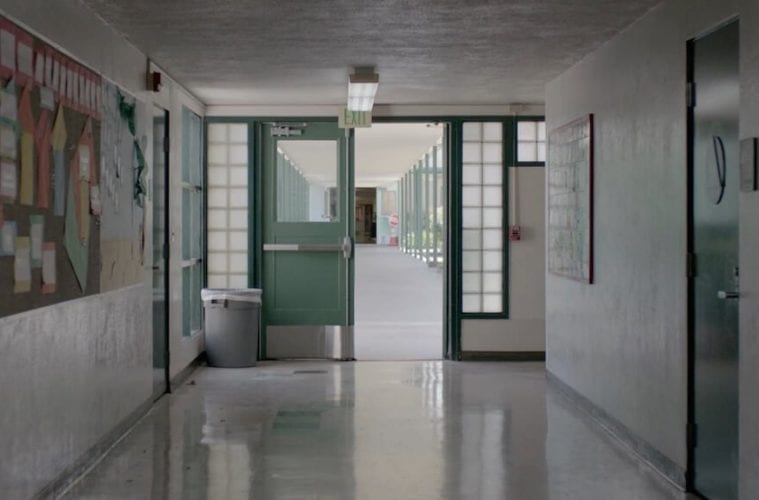 This year’s collection of Oscar-nominated animated and live-action shorts kicks off with the most expendable of the titles right at the start. Dear Basketball (USA) is a five-minute love letter to the game, written and narrated by Kobe Bryant as his career drew to a close. “This season is all I have left to give,” Bryant says in voice-over, “but that’s OK. I’m ready to go.” The traditional, hand-drawn animation — like a sketchbook come to life — is nice, and Bryant clearly pulled strings with high-placed pals, because the score is by none other than John Williams. But the short ultimately feels like a mix of sports commercial and humble-brag.

Garden Party (France) is a gorgeous, morbid piece of photo-realistic CG animation, following a group of frogs and toads around the pool and inside the walls of a plush/garish villa, where we slowly gather something very, very bad has happened to the residents. I wasn’t sure what the ultimate point was, but it’s a visual stunner.

Since it’s Oscar season, that means there has to be a nominee from Pixar. This year it’s LOU (USA), a so-so entry from the CG giant. On an elementary school playground, items left in the lost-and-found box magically assemble themselves into a sort of custodial creature: softball eyes, body made of a sweater. (The premise could just as easily be the basis of a horror film as a comic short.) This “LOU” creature schools one young bully into mending his ways, and also uncovers the cause of the kid’s antisocial behavior. The short film is a bright, forgettable throwaway, even though its anti-bullying message is timely.

Negative Space (France) is a bittersweet, stop-motion charmer. A man recalls how, when he was a boy, his father taught him to pack a suitcase. That’s how they bonded, appreciating the art of organizing clothes, shoes and accessories to perfection. It’s a slight tale, but visually inventive. Clothes surge across the screen like the ocean surf, or double as the waving flora at the bottom of the sea. In barely more than five minutes, Space beautifully delineates a father-son relationship, and ends with a perfect, smile-through-tears final line.

At nearly a half hour, the longest of the animated nominees, Revolting Rhymes Part One (UK) is based on a Roald Dahl book, and has plenty of the subversive, wry humor you’d expect from the author of Charlie and the Chocolate Factory and Matilda. This CG reworking of the tales of Snow White and Little Red Riding Hood has a girl-power foundation that eliminates the need for princes, charming or otherwise. Instead, these young ladies — a commoner and a royal — unite against a world of limitations, plus a variety of hungry wolves. And who can resist a rhyming fable that includes the line, twice, “She draws the pistol from her knickers”?

The live-action program saves its best films for the first and final slots. Based on an actual event in DeKalb County, DeKalb Elementary (USA) is a filmmaking lesson in knowing how to get the utmost dramatic power by keeping things simple. On what seems like a normal school day, Cassandra (Tarra Riggs), the receptionist in the principal’s office, faces the biggest challenge of her life when a lumpy young man named Bo (Steven Hall) ambles in and casually pulls out an assault rifle. What follows is a riveting, peculiarly quiet standoff, during which Cassandra acts as a cool-headed intermediary between the childlike Bo and the operator at a 911 call center. Not only the grace under pressure but ultimately the compassion Cassandra displays is remarkable. It’s a wonderful performance by the Mississippi-based Riggs, nicely backed by Hall’s sympathetic turn. (The actual event happened at McNair Discovery Learning Academy in 2013, and the real receptionist’s name is Antoinette Tuff.)

I’m sorry to say that another fact-based story misses the mark as surely as Elementary hits it. My Nephew Emmett (USA) takes the horrifying tale of the lynched teen Emmett Till and somehow manages to make it emotionally inert. The focus is on Till’s uncle Mose (L.B. Williams), who has invited the Chicago native Emmett (Joshua Wright) to spend the summer down in Mississippi. While it theoretically makes sense to filter the story through the older man’s eyes, the film feels stuck inside Mose’s house. The movie only really sparked to life for me in its last moments, when it segues to the actual news footage of Mose Wright standing in his front yard, testifying about Emmett’s middle-of-the-night abduction.

The Eleven O’Clock (Australia) is the only comic entry among the live-action nominees. Josh Lawson and Damon Herriman play a psychiatrist and his patient. Or a patient and his psychiatrist. The problem is, each man insists he is the doctor and that the other man is the deluded client. The convoluted back-and-forth of their conversation recalls the famous Abbott and Costello “Who’s on First?” routine, only it goes on too long and lets us too easily guess what the final twist will be.

An atmosphere of melancholy hangs over The Silent Child (UK), the story of an upwardly mobile British family trying to ready their deaf four-year-old daughter Libby (Maisie Sly) for her first year of school. To that end, perky mom Sue (Rachel Fielding) hires a nanny, Joanne (Rachel Shenton), to interact with the girl. Joanne is fluent in sign language, but Sue insists that Libby can lip-read perfectly. (We soon realize this is not true, that the poor girl is isolated in her deafness.) Joanne bonds with Libby, drawing her out and teaching her to sign. But the progress they make can be undone by a well-meaning parent too impatient to understand what’s truly best for a special-needs child. The film is essentially a PSA, drawing attention to the paucity of teaching support for deaf students in schools everywhere. But it’s a PSA that’s dramatized with great emotional force. 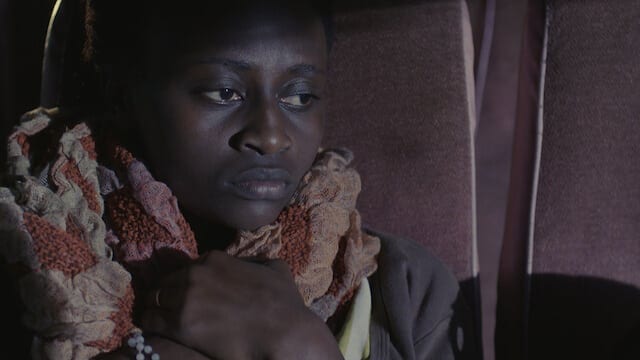 Watu Wote: All of us is a beautifully-shot film set in a war zone between Kenya and Somalia.

Finally, the live-action program winds up with another powerful, fact-based story, Watu Wote: All of us (Germany-Kenya). Beautifully shot in deep, rich hues, it centers on a very long bus ride in the border region between Kenya and Somalia, where in recent years Christians have repeatedly been attacked and killed by Al-Shabaab terrorists. One woman, Jua (Adelyne Wairimu), is a Christian traveler on the bus, otherwise mainly populated by Muslims. For good reason, as we learn more about her, she mistrusts these other passengers, who return the favor by ogling her (and her rosary) disapprovingly. She earns a particular rebuke from a schoolteacher (Abdiwali Farrah) when she refuses to buy water or snacks from a young man on the bus, who’s trying to raise money for tuition. These tensions come to a head when the bus is ambushed by a gang with assault rifles in a sequence that’s remarkably tense but delivers us unexpectedly to a powerful, hope-filled message — the kind we can use today.