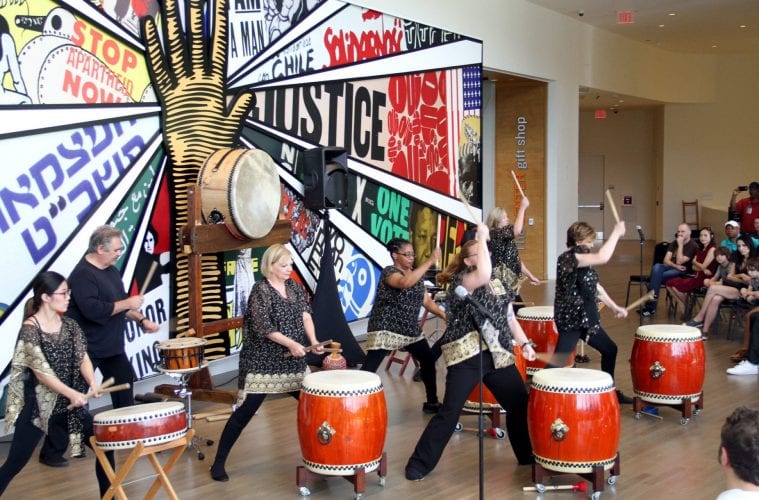 This past Saturday, the National Center for Civil and Human Rights hosted the World Music Day event that featured six different sets of performers who represented different takes on the eclectic genre, including both traditional and contemporary influences. Tickets to the all-day event included admission to the center’s gallery exhibits.

Most of the day’s performances were in the glass-faced atrium that looks out onto Centennial Olympic Park and serves as the center’s main second-floor entrance. There were no empty seats, and another half-dozen chairs were brought in to accomodate the overflow crowd. The capacity was about 50, and the number of people in the room varied throughout the day as people came and went.

They were followed by the Latin/jazz quintet Tito Gato, which opened its set with two original tunes written by band leader and keyboardist Daniel Padrón. The group went a little overtime, evidently not squeezing in all the music they had prepared for the occasion. Still, they got in a nicely entertaining survey of Latin dance rhythms — samba, salsa and cha-cha among them. They turned at the end to a non-Latin number, “I Ain’t Got No Shame” from George and Ira Gerswin’s Porgy and Bess.

The Emory Gamelan Ensemble prefaced their performance of Javanese music in the conference room on the Center’s first floor by demonstrating their unique instruments to kids. The ensemble’s members represent a varied cross-section of Emory students and residents from the surrounding community.

Emory is one of only a handful of American universities with sets of instruments in both pelog and slendro tunings. For Saturday’s performance, the group brought instruments from the gamelan slendro and performed a list of works suited to it, essentially drawn from their performance this past April at Emory’s black-box Performing Arts Studio. The group worked their meditative musical magic over the course of six traditional compositions under the apt program title, “Peaceful Rain.”

The day concluded with performance by the Atlanta Taiko Project in the second floor atrium.

The Japanese word taiko simply means “drum,” and includes a broad range of percussion. Outside of Japan it refers more specifically to the drums called wadaiko and to the form of ensemble drumming that uses them. Taiko music was introduced to Japan from other parts of east Asia in the sixth century. In the late 20th century, professional taiko drumming troupes like Kodō helped popularize the genre in the United States and Europe.

While its roots are in the Japanese taiko traditions, the Atlanta Taiko Project practices what their website calls “New American Taiko” — including original compositions and occasionally incorporating elements of other contemporary styles like hip-hop and latin music.

Like Emory’s Gamelan, this taiko group draws members from the broader community, and artistic director Peter Marino led the performance in a manner reflecting that, including a piece in which he invited a good number of audience members to step up and learn the technique and music. Movement in taiko performance technique is itself stylized, one might say choreographed, but the music performed on Saturday was not all that difficult. Its primary attraction to a new fan is its sheer visceral nature, imparting a sense of empowerment. In that light, it is notable that a majority of the performers were women. (Only Marino and one other man constituted the males in the group.)

It’s worth mentioning that all of the groups that performed in this World Music Day are based locally, a nod to the notion that as a point of creative origin, Atlanta is fostering among its resident artists an increasingly international palette of styles, influencing the language of its own cultural voice.