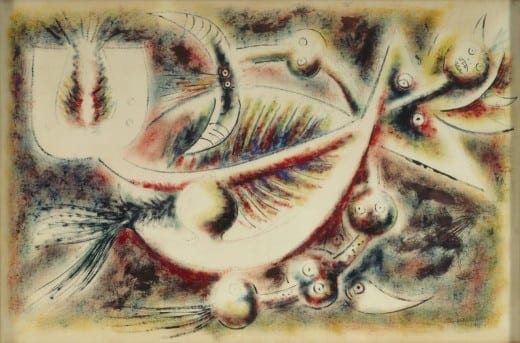 Wifredo Lam: Imagining New Worlds, at the High Museum through May 24, presents an artist usually described as “an internationally known Cuban-born surrealist.” He was much more than that, but it takes a bit of time to explore the full dimensions of the new worlds he imagined.

Lam lived in more than one world from the beginning. Born in 1902 of an ethnically Chinese father and mother of African and Spanish descent, he grew up in a small town enlightened enough to send its talented local son to Spain for art study. The early works in this exhibition reveal a young artist absorbing the lessons of European art movements as filtered through insufficiently known Spanish intermediaries, Cézanne and Matisse being the most obvious indirect influences.

Although some of Lam’s portraits suggest dreamlike circumstances, a 1930 Expressionist-tinged painting of an off-kilter cityscape featuring a woman with head tossed back in revelry (Composición, I) suggests a much more critical view of a disturbed society.

Curiously, Lam’s most placidly Matisse-like paintings in this exhibition come from 1937, the year in which he also produced the violent, crowded imagery of La Guerra Civil, a painting not in this exhibition but important to note here because of its display in the 1937 Paris International Exposition, alongside Pablo Picasso’s Guernica.

In 1938, near the end of the Spanish Civil War, Lam arrived in Paris with a letter of introduction to Picasso, who remarked, “you remind me of someone I knew long ago . . . me.”*

Three years later, Lam was sufficiently established in the Paris art world to be thrown into conflicted emotional upheaval when the fall of France to German forces sent him fleeing southward with his friends in the Surrealist movement. After a remarkable sojourn in Marseilles with André Breton and others, he embarked on a trans-Atlantic voyage on a ship carrying some 300 other refugee intellectuals, including Breton and the young anthropologist Claude Levi-Strauss.

Having returned to Cuba for the first time since 1923, Lam began painting works that combined the strategies of Surrealism with imagery based on the African diaspora religion of Santería. He had found the subject matter that would preoccupy him for the rest of his life.

Elegguá, the Santería spirit of beginnings and endings, would appear in many guises in his work in the years to come, alongside other figures embodying invisible forces. Although Lam made no claim to conventional religious beliefs, he believed in the power of the imagination that gave shape to the divine powers he incorporated into his work.

The figures are more than a little unnerving in their mixture of geometry and fluidity, as they dance and flow in a landscape that is little more than shorthand allusions to tropical vegetation. Lam meant them to be unsettling: “There is no equivalent,” he remarked, “for the well-known phrase ‘No problem’ in my paintings. There are problems in them.”*

Later critics such as Lowery Stokes Sims have declared that Lam should be considered a major contributor to the ideals of the Négritude movement with which he maintained close contact; Lam had encountered this quest for a postcolonial Afro-Caribbean and African identity through poet Aimé Césaire during Lam’s period of internment on the Vichy-controlled island of Martinique before being permitted to travel on to Cuba. His direct involvement with Afro-Cuban sources, however, was cut short by the uncomfortable tensions between himself and the dominant aesthetic movements in the Cuban art world, leading to his return to Paris in 1946 after a consequential visit and exhibition in Haiti.

Whether in Paris, back in Cuba for a time in the 1950s, or in Italy where he spent the latter part of his life as a sculptor and printmaker as well as painter, Lam never deviated from the dreamlike scenarios of divinities and humans melding with animal and vegetal forms. He came to incorporate the shapes of New Guinea sculptures alongside the African ones that had inspired him from the beginning — the visual influences are demonstrated in this exhibition by the juxtaposition of works from New Guinea and Africa alongside Lam’s paintings. Despite the introduction of new visual elements, the subject matter remained essentially similar: even the seeming Christian allusions of such work as the 1969 etching series Annonciation are expressed in imagery more in tune with his earliest Santería figures than with conventional devotional art, and the annunciation in question may not be Christian at all.

Césaire composed poems to accompany Annonciation, a reversal from Lam’s usual practice of producing etchings or drawings to accompany the work of poets. The elegantly printed volumes that resulted from these collaborations are comprehensively presented in the exhibition, and the development of these complex connections and many others are illustrated in a detailed timeline that occupies one of the exhibition’s side galleries. The few aspects of Lam’s life not documented by the exhibition itself are excellently illustrated here.

Lam’s many worlds, then, are presented in a visually stunning array of artwork and documentation in which the wall text is an essential but concise and readily comprehended element. As is only appropriate for a survey of the work of one of Cuba’s most illustrious artists, the text is bilingual in English and Spanish throughout the exhibition.

The titles of Lam’s paintings from 1938 onward, however, are in French, and the French is left untranslated. Viewers whose vocabulary fails them may find themselves reaching for, or longing for, online translation programs to decipher Le Sombre Malembo, Dieu du carrefour. (As the wall text indicates, Malembo is the name of a West African slave port, not a god, so the crossroads or public square in this 1943 painting may be a multilayered metaphor.)

By the end of this singularly enlightening presentation of a startlingly beautiful body of work too little known to American audiences, visitors will find it easy to understand how Lam’s imaginative worlds inspired the new work by Brooklyn-based artist José Parlá and Atlanta artist and scholar Fahamu Pecou that forms a complementary exhibition, also titled Imagining New Worlds.

* Quotations and biographical information are from the excellent catalog edited by McMullen Museum of Art curator and Boston College professor Elizabeth T. Goizueta.