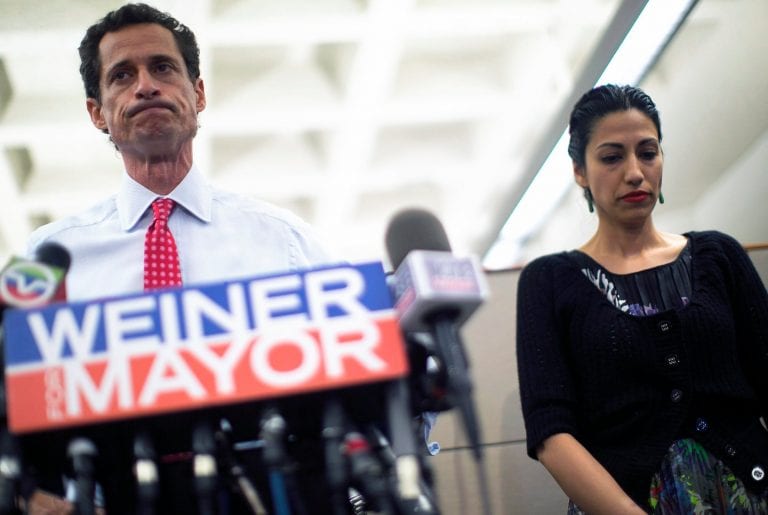 Review: “Weiner” shows failings of a favored politician and the media that took him down

The documentary Weiner is a reminder that, even before the 24/7 news media decided en masse that the only story worth covering was Donald Trump (thus ensuring his success thanks to their limitless free coverage), they had already lost a sense of responsibility, proportion or objectivity.

Take the case of Anthony Weiner. As a Democratic U.S. Representative for New York, he had enormous political promise. He also had nobody but himself to blame when he texted and sexted women he barely knew, and chose the adolescent nom de smartphone “Carlos Danger.” As smart as he was about so much else, he was also really stupid. But he tried to get back on track.

Josh Kriegman and Elyse Steinberg’s film was designed to document that process, theoretically an inspiring comeback story. That didn’t happen. Instead, “Carlos Danger” did. Terrible scenario for Weiner, fantastic scenario for Weiner.

“This is the worst,” he sighs, cadaverous from exhaustion at the film’s start. “They’re doing a documentary on my scandal.” He takes a pause, then takes stock: “I guess the punch line is true about me. I did the things. But I did a lot of other things, too.”

Indeed. And the doc opens with fiery footage of Weiner on the House floor, trying to shame the do-nothings in Congress to do their job — and having no idea that the shame would soon be all his.

MSNBC’s Chris Matthews says to Weiner, admiringly, on his Hardball show, “You’re scaring the hell out of the right.”

Then came CrotchGate. As big a mistake as shooting and sending those pics and smutty texts in the first place was Weiner’s refusal to fess up when the news cameras first turned his way. He hemmed, he hawed, he lied. He said he didn’t know whose bulge that was, whose boxer briefs were swaddling it. As even CNN’s usually obtuse Wolf Blitzer puts it on-air, “You would know if this was your underpants.”

What follows, for a while, is familiar as the media storm convinces Weiner to resign in 2011. Familiar in a whole new, distressing way is what happened two years later, when the second texting scandal breaks while he’s running for mayor of New York City. That Weiner should do the same thing at least twice is a head slapper, though he plausibly claims that his latest case of flirty fingers occurred when he and his younger wife, Huma Abedin, were considering ending their marriage.

They didn’t. As she glides through the movie with a Shakespearean mix of steely grace and battle fatigue, you wonder which has been the harder challenge in Abedin’s young life: being married to Anthony Weiner, or serving as Hillary Clinton’s closest advisor for many years.

In part, Weiner is an attempted portrait of a marriage that doesn’t quite unlock the mystery of why these two people choose to stay together. (That’s a mystery that the actual people in a marriage sometimes can’t explain, even to themselves.) The bigger portrait here is of an undisciplined, voracious 21st-century media anxious to earn clicks and ratings to pursue what editors and producers tell their reporters is The Single Big Story. Nobody wants to hear about Weiner’s policy plans for New York. They just scold him and question his judgment, one after the other, in virtually the same words at scheduled press conferences and impromptu on city sidewalks. It’s monotonous, relentless and a betrayal of what journalism is meant to do.

While it serves him to say so, at one point Weiner sighs in defeat: “They don’t do nuance . . . they’re the opposite of nuance.”

On election night, the 23-year-old object of his sexting, Sydney Leathers (you can’t make that sort of name up, unless maybe she did?) shows up outside the venue for Weiner’s concession-speech party. Squeezed sausage-style into a red dress that gives ample view of her full-back tattoo, she’s there in hopes of gaining more media attention.

Weiner’s team dodges the cameras on the sidewalk by shuttling the defeated candidate through a secret corridor in the fast food restaurant next door: “We’re executing the McDonald’s plan.”

It’s a moment that reminds you what an uphill struggle a TV comedy like HBO’s Veep has these days: How do you satirize a political landscape that has completely dissolved the boundary between reality and ridiculous?

Weiner. A documentary by Josh Kriegman and Elyse Steinberg. Rated R for language and some sexual material. 96 minutes. At Landmark Midtown Art Cinema.