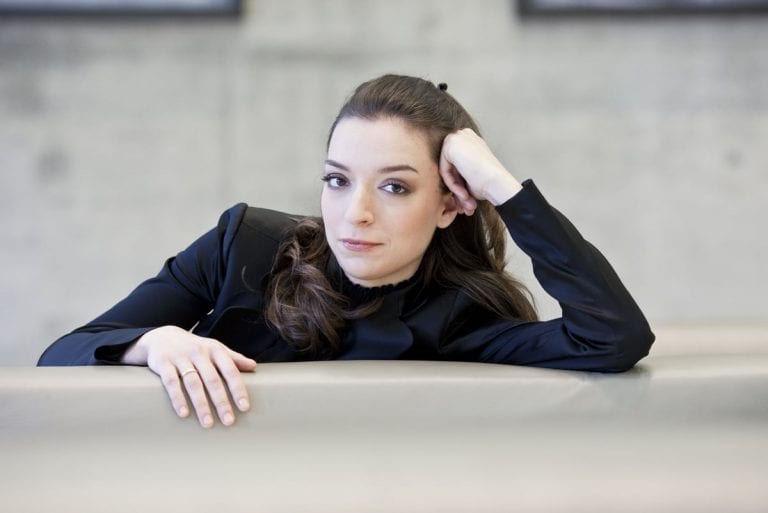 The 27-year-old Avdeeva has brilliant technique and exquisite feel in her playing.

More formally known as the Warsaw National Philharmonic Orchestra (Orkiestra Filharmonii Narodowej w Warszawie), the world-renowned ensemble was founded in 1901, making it one of the oldest musical institutions in Poland. Wit has been at its helm since 2002.

The concert opened with Witold Lutoslawski’s “Little Suite,” completed in 1951 when the Polish composer, then 28, was keenly interested in his country’s folk music. Poland was under the heavy foot of Stalinist domination by the Soviet Union, which Lutoslawski despised.

The 10-minute suite is charming and often witty. Its four sections — “Fife,” “Hurra Polka,” “Song” and “Dance” — are all based on Polish folk melodies and are colorfully orchestrated. It has long been a staple of Wit’s repertoire, and he conducted it from memory.

Although the program didn’t say which of the flutists on its roster played the piccolo in the opening “Fife” section, Joanna Gatniejewska should be credited with that significant piccolo solo work.

Up next was the Piano Concerto No. 2 (Op. 21) of Frédéric Chopin, with Russian pianist and 2010 Chopin Competition winner Yulianna Avdeeva as soloist. Avdeeva is the most recent rising star whose name is associated with the renowned International Piano Academy Lake Como in Italy, where she studied under its artistic director, William Grant Naboré, and continues to work with pianists Dmitri Bashkirov and Fou Ts’ong.

The 27-year-old Avdeeva has brilliant technique, all put to the service of the music rather than empty show. Her performance was organically expressive and had a collaborative feeling, as if she and the orchestra were a large chamber ensemble. But it was in the middle “Larghetto” that her introspective lyrical insights particularly stood out.

She followed up the concerto with a solo encore, Chopin’s well-recognized Mazurka in B-flat major, Op. 7, No. 1.

After intermission, Wit and the orchestra performed the Symphony No. 8 of Antonin Dvořák, a vibrant, cheerful and tuneful 40-minute work greatly inspired by Bohemian folk music.

Wit gave equal measure to the melodic and dramatic aspects of the work. The expressive theme in the cellos that opens the first movement of “Allegro con brio” transforms over its span through musical sun and shadow into a tempestuous climax with a bold finish. The second movement, marked “Adagio,” moved along, but not so fast as to feel hurried. The “Allegretto grazioso” third movement, in 3/8 meter, was rendered liltingly, then picked up steam in its duple-meter coda, marked “Molto vivace.”

From its opening unison trumpet fanfare, the “Allegro ma non troppo” final movement afforded lots of opportunity for the orchestra’s brass to shine. Of special note was the fulgurant flute solo a little more than two minutes into the movement, impressively played by principal Krzysztof Malicki. The orchestral tutti passages were vigorous, especially the swirling race to the final barline.

The concert concluded with not one but two orchestral encores: a full-throttle rendition of the “Hungarian Dance No. 5” by Johannes Brahms and a rousing nod to the U.S. audience with John Philip Sousa’s “The Stars and Stripes Forever.” Interestingly, the famous piccolo obbligato solo that follows the first time through the breakstrain was played not just by Gatniejewska on piccolo but doubled by Malicki on flute, which offered a fresh take on the passage. (Sousa himself used one or three piccolos for it, but never two.) Both performers stood up to play it. The brass took their turn at standing during the march’s final grandioso, in a bit of old-fashioned celebratory musical extroversion.

After the concert, the orchestra hopped onto its tour bus behind the Schwartz Center, headed for Charleston, South Carolina, and Gainesville, Florida, this weekend before crossing the continent to California, including a pair of concerts at Davies Symphony Hall in San Francisco on November 11 and 12.