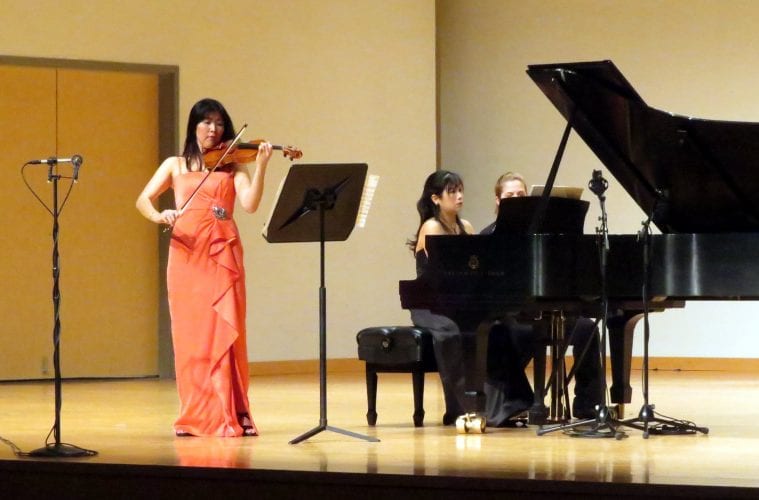 On Monday evening Kennesaw State University’s Bailey Performance Center was the site of a free recital by violinist Helen Hwaya Kim with guest collaborative pianist Sakiko Ohashi. They performed music by Kreisler, Respighi and Brahms to a modest-sized audience in the center’s 620-seat Morgan Hall.

A native of Canada, Kim is one of Atlanta’s more frequently sought-after independent performers in the city’s classical chamber and new music scenes. She is associate professor of music at KSU and assistant concertmaster of the Atlanta Opera Orchestra.

Ohashi, a native of Japan and alumna of the Juilliard School, founded the New Orleans Chamber Music Festival in 2004. Kim and Ohashi first met as teens at the Aspen summer music festival and reunited when they were both accepted into Juilliard in New York City a few years later. They later formed a duo. Ohashi recently relocated to Sioux Falls, South Dakota, and was flown into Atlanta for this recital. In April, Kim and Ohashi will perform together again in Vermont.

They opened with “Praeludium and Allegro” by legendary violinist-composer Fritz Kreisler. Written in 1910, it was one of a number of original compositions that, from 1905 to 1934, Kreisler falsely attributed to other, historical composers — in this case the 18th-century Italian violin virtuoso Gaetano Pugnani.

Kreisler was good enough at imitating Pugnani’s style that he even fooled eminent French composer Vincent d’Indy, who was known for resurrecting ignored works by early composers and was familiar with Pugnani. But when New York Times critic Olin Downes investigated the work’s origins, Kreisler admitted it to be his own. The scandal made it to the front pages of newspapers worldwide.

Despite its genesis in a hoax, “Praeludium and Allegro” represents the best of Kreisler’s work as a minor composer, and the title is usually appended “in the Style of Pugnani.” It is fitting to note that Pugnani, whose music is rarely heard today, was, like Kreisler, far more esteemed in his own day as a violinist than as a composer.

Kim’s rendition of the virtuosic piece was strong and forthright, not overbearing as some performers are wont to play it. She delightfully allowed the music and its virtuosity to speak well for themselves in this popular showpiece rather than paste on affectations.

Italian composer Ottorino Respighi is best know for his evocative orchestral works, such as “Fontane di Roma” and “Pini di Roma.” Nonetheless, Respighi wrote some intriguing chamber music, including a pair of violin sonatas. The second of those, his Sonata in B minor, is a dramatic and virtuosic (if somewhat underrated) contribution to the violin and piano repertoire. Composed in 1917, shortly after “Fontane di Roma,” the half-hour-long sonata represents Respighi’s command of traditional tonality and Romantic idioms that were not typical of his mature style.

Its performance by Kim and Ohashi was the most interesting and engaging of the evening. The sonata’s warm, ruminative opening set the overall tone of the piece, but that soon shifted to an intense melody that made Kim’s violin soar. Drama and lyricism alternated as the music worked up to a passionate climax, before receding wistfully to a quiet end.

The absinthian second movement began with a dreamy piano introduction, slowly building intensity then unwinding to a contemplative close. The final movement, a passacaglia, began in a grand manner followed by a more lyrical passage, then an electrifying conclusion that provided Ohashi with an excellent platform to demonstrate her pianistic virtuosity.

After intermission, came the Violin Sonata No. 1 in G major (Op. 87) by Johannes Brahms. Completed in the summer of 1879, each of its three movements shares thematic material drawn from the openings of the composer’s Op. 59 songs “Regenlied” and “Nachklang,” earning it the nickname “Rain Sonata.”

The piece is conceptually in league with the composer’s latter chamber works, and the challenge for the performers is to balance intricacy with melodies of characteristic Brahmsian breadth that appear throughout — and the control of motivic development — in what is a team-effort sonata. There is good reason the very first edition bears the inscription “for Pianoforte and Violin.”

Kim is a formidable violinist with a bold, energized sound. Ohashi is a great match for her as collaborative pianist. The two seem to intuitively communicate well as a team onstage. As with the other works on the program, this was evidenced by the integrity of their performance of this Brahms sonata.

One can easily suggest that the modestness of audience size was related to the evening’s drizzly, foggy weather and its impact on late rush hour traffic. But for those who complain that classical music is “elitist” because it is too expensive, it is worth noting that, like many university faculty recitals, this particular high-caliber performance sported free admission. For a performance of this quality, you can’t get a better deal than that.