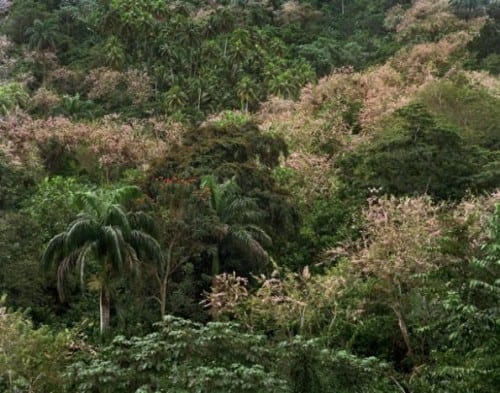 If the doldrums of winter have you longing for more exotic climes, the photography on view at Jackson Fine Art through April 13 should serve as a delicious respite. Three concurrent exhibitions by renowned international photographers Michael Kenna, George Georgiou and Andrew Moore offer spectacularly transportive landscapes.

British photographer Michael Kenna‘s “Works From 2011-2012” is a collection of 12 black-and-white images created during his recent travels in the Far East (Japan, China, Thailand and South Korea) and in Bordeaux, France. Anyone familiar with Kenna’s singular, dramatic sense of composition will not be disappointed. His impeccable style is in full force, one that examines the discrete poetry of a given locale and transforms it by enveloping it in an otherworldly atmosphere.

Kenna’s working process entails extremely long exposures, sometimes of several hours. As a result, his photographs often appear as meditations, elevating his subjects to iconic timelessness. Many of the images here are of trees or tree lines, some shrouded in snow, others in mist, but all display an acute awareness of line, form and contrast within their Zen-like compositions. The intimacy imparted in these vistas, devoid of human figures, gets to the real magic of Kenna’s eye; he skillfully delivers us into beautiful, dream-like locales.

He directs his lens to the geometry of French vineyards, the dance of cloud cover over the Andaman Sea, the mountains of South Korea. His painterly compositions capture the fleeting beauty of the seasons and, in our response to them, reveal the depth of our connection to the natural world.

In “Tian Tan Buddha, Lantua Island, Hong Kong,” Kenna captures a monumental stone Buddha on a hilltop through a rain-inflected window, which adds another veil of texture to the scene. The manipulation of light as a focal point in this print and in “Baby Elephant, Phuket, Thailand,” reminiscent of the halos seen in glass-plate photography from the early 1900s, imparts a sense of nostalgia to these already captivating images. Meanwhile, George Georgiou‘s “Fault Lines/Turkey/East/West” offers compelling insight into the Turkish landscape, which is quickly changing both physically and culturally. Uniquely situated between East and West, between Islamic and secular influences, Turkey is a cultural and political flashpoint, and the geopolitical tension can be felt in Georgiou’s landscapes and portraiture.

“Konya, Market,” “Yenikoy Village, Artvin” and “Elazig” witness huge swaths of the landscape devoured by tract and high-rise housing. Inherently eco-conscious, these images point to Turkey’s growing pains and the effects today’s decision-making will have on future generations. That the images are beautiful — Georgiou’s deliberate framing and extreme color sensitivity make them vibrate with atmosphere — serves to elevate concern for the environment and the people who inhabit it.

For the portraits on view here, Georgiou snapped pedestrians in Istanbul’s Taksim Square, the heart of the city and a major transportation hub and popular shopping destination. Although it’s a very crowded area, he has focused on lone figures or couples. His perspective — an upward angle that leaves only sky in the background and no city context — allows the individuals to take center stage. The subjects range widely in race, class and attire, which skillfully showcases Istanbul’s diversity. Georgiou’s “Ishak Pasa Palace,” an arresting vista from a humble outdoor café that overlooks the ancient palace, is a beautiful study in contradictions. The juxtaposition of the cafe’s cheap, disposable furniture and the elegant, fort-like palace captures the liminal ground between the past and modernity, and its complex beauty.

Also interested in documentation of the ravages of time, Andrew Moore gives us “New Works From Cuba,” six digital chromogenic prints that are cinematic in their scale and dramatic effect. Unlike Georgiou, Moore’s aesthetic insights take precedence over his sociopolitical ones (at least in this exhibition), and his love for the crumbling grandeur of Cuba has not faded since his first artistic foray in 1998. Both “Mirador, Gibara” and “Cortina Roja, Sancti, Spiritus” depict the decaying facades of portals: the former an exterior shot of an entrance to an architectural ruin, the latter an interior view of a curtained doorway or alcove. Compelling as visions of decaying elegance, they also hint at allegory, perhaps as passageways between past and present.

“Cortina,” 7½ feet tall and printed with saturated hues of red, orange and blue, feels large enough to step into. The same can be said of “Corredor Verde, El Vedado, La Habana,” a glowing interior foyer of a residence that recalls the master works of Vermeer in its use of light. The crumbling architecture in these three photos serves as reminders of the inevitable demise of the man-made over time and, by proxy, of our mortality. In contrast to the architectural subjects, Moore’s most recent landscapes, “Los Campos Verdes” and “Puente de Bacunayague, Via Blanca,” depict lush views of the verdant Cuban countryside. His eye is unfailing; his senses of color, scale, proportion and light offer a sublimely rich portrait of a specific time and place. And although his saturated color palette takes a back seat here to a more subdued one, we are privy to a moment in time to be savored and remembered.