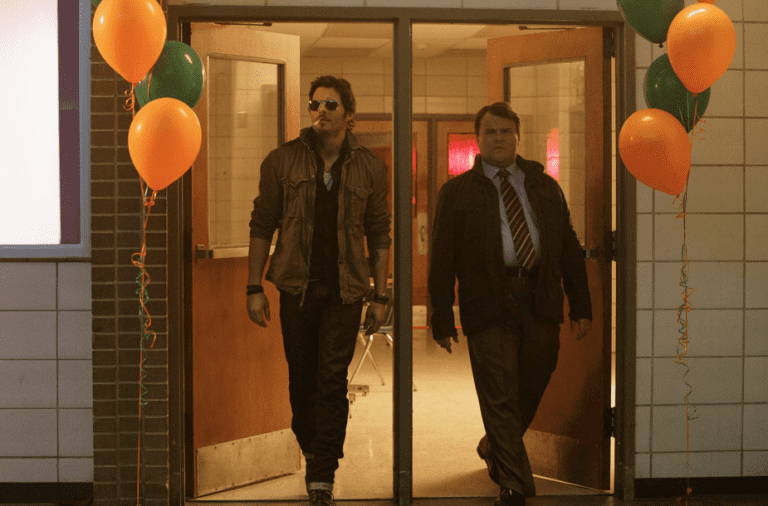 Bromance veers into an awkward zone in the not-quite-edgy-enough comedy The D Train. Jack Black plays Dan Landsman, a Pittsburgh guy volunteering with fellow high school alumni to rally classmates to turn up for their upcoming 20th reunion. Nobody wants to come. Then, late one night, Dan recognizes the dashing TV spokesmodel of a Banana Boat sunscreen ad: a former high school drama club staple, Oliver Lawless (James Marsden), who moved west to be an actor and appears to be living the dream.

Making up a fake business opportunity on the coast, Dan convinces his boss (Jeffrey Tambor) at the vaguely defined office where he works to send him to L.A. for the weekend. He manages to track Oliver down, they hang out at one of the city’s self-congratulatory clubs of the moment, and actually start having a good time, reminiscing and hanging out. It’s during this section that we see that both guys are actors in their own ways; each is pretending to be something he isn’t. And then, after too many drinks and bathroom toots of cocaine, things get a little crazy between the two — not in a berserk Hangover way, but more in a, “Hey, dude, what happened last night was weird, so maybe let’s not talk about it again,” way.

A comedy of discomfort, D Train scores points for crossing a line between two characters that most movies wouldn’t. But it doesn’t quite build (in laughs or in insight) after that barrier is crossed. Dan goes back home, where he’s viewed as a hero because Oliver has agreed to fly in for the reunion. But now, Dan would just as soon the actor not show up. He greets the long-desired popularity his old classmates lavish on him with a mixture of pride, dread and rising panic.

The writing team Andrew Mogel and Jarrad Paul (the Jim Carrey comedy Yes Man) make their directing debut here. It’s kind of a shame that they didn’t have someone else in the director’s seat, encouraging them to punch the script up a little more — with crazier, smarter or subtler comedy, and with richer character detail. (Just one look at the telegraphed character names “Dan Landsman” and “Oliver Lawless,” and you can see that the script was still sort of beta when filming started.) Near the end, the movie disintegrates into one of those lazy scenes where secrets are shouted out loud in the middle of a mob of startled, silent witnesses. It’s the kind of thing that happens when scripters write themselves into a corner, or don’t take time to finesse their screenplay through one more draft.

The cast is game. With his slouch, swagger and cigarettes, Marsden nails the persona of a pretty boy drifting into sun-kissed d-baggery on the West Coast; his casual insincerity is part of his skin-deep charm. And Black is wincingly good as a suburban everyman desperately trying to sound hip by injecting “sick” and “dawg” and “peace” and “holla” into his conversations with Oliver. If you’re not a Jack Black fan, watch Richard Linklater’s Bernie, and you’re likely to become one. But that film only underscores how little this new one gives him room to stretch.

The always good Tambor delivers as Dan’s sweetly gullible boss, who’s proud not to know how the Internet works. But as Dan’s wife, Kathryn Hahn, a sympathetic actor, has nothing much to do here but hold the baby and deliver reaction shots at her husband’s spiraling anxiety.

Also opening is a foreign-language comedy, and let’s get two things out of the way.

First, the long-winded title: The 100-Year-Old Man Who Climbed Out the Window and Disappeared. Second, the easy analogy: Yes, it is sort of like a Swedish Forrest Gump, only without the then-cutting edge CGI effects and the knee-jerk conservative subtext of the Robert Zemeckis movie. 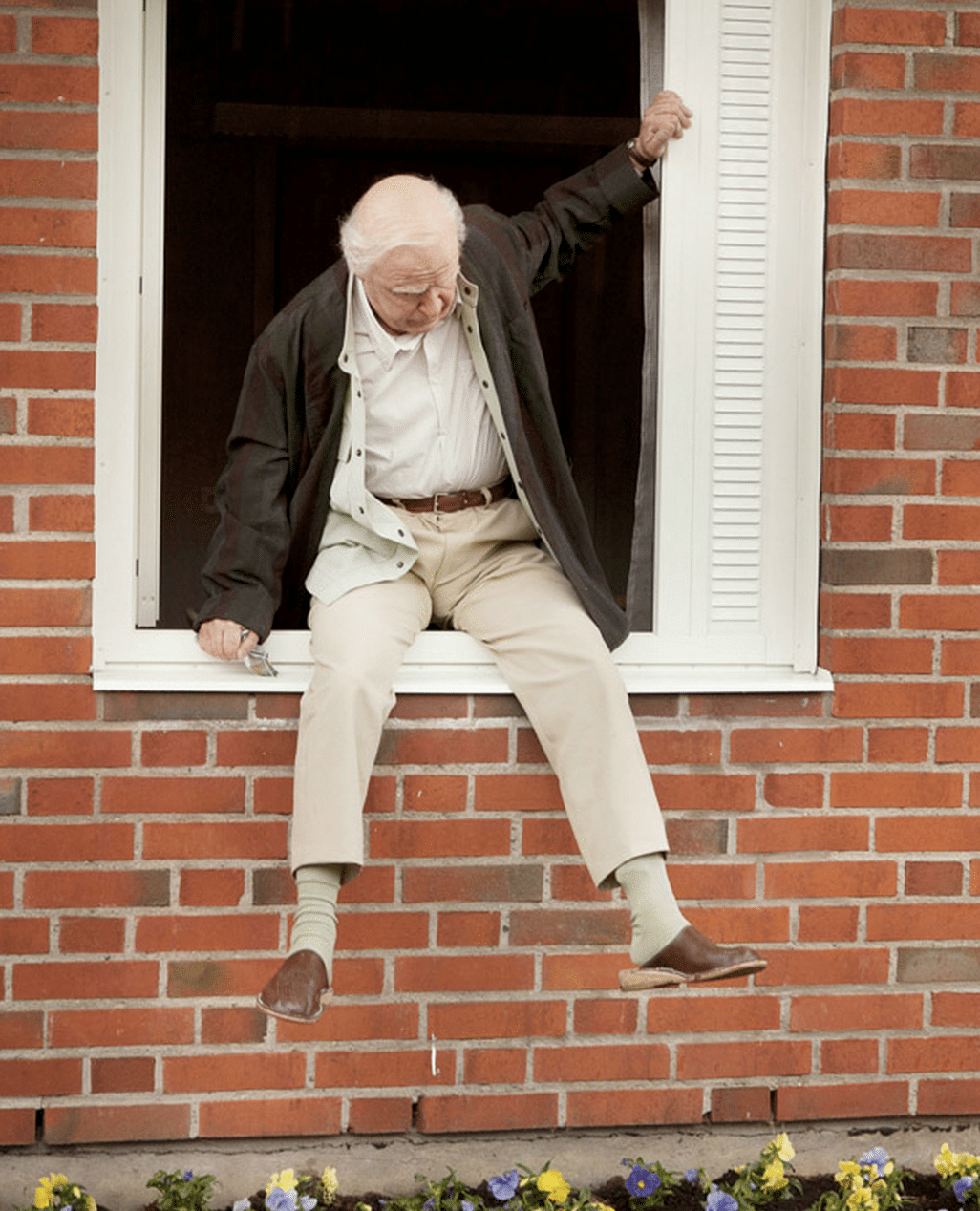 Robert Gustafsson plays Allan, the centenarian who steps out of the ground-floor window of his assisted living home on his birthday and wanders to the bus station. Let’s just say that Allan is kind of rapturously stupid. Growing up mainly as an orphan, his only real joy in life is blowing things up — a hobby that ends with the accidental and messy death of his town’s richest man, lands Allan in a mental home, and eventually leads him to the States in the employ of the Manhattan Project.

Ah, but that’s just one of Allan’s many Zelig- or Gump-like interactions with history as a young man. We also see him working (quite empty-headedly) as a Cold War spy, getting drunk with Harry Truman and serving hard time in a Gulag labor camp with Albert Einstein’s very stupid brother, Herbert.

All of this we get via flashbacks, but the present-day plotline is plenty busy all by itself. Over the course of a couple of very hectic days, old-man Allan gets involved with a suitcase full of 50 million euros, a gang of skinhead thugs, their Cockney mob boss and an elephant. It’s all really very silly. The movie has less an interest in scoring historic or political points (as Forrest Gump did) than in giving viewers a fun time. That includes a fiendishly gleeful habit of bumping off supporting characters in colorful, abrupt ways.

The film’s real strength is in surrounding Allan with charmingly idiosyncratic characters. They include Benny (David Wiberg), an egghead who has majored in dozens of different academic fields but finished a degree in none, and Gunilla (Mia Skäringer), a strong woman who gets involved with all this nonsense against her better instincts. The 100-Year-Old Man is ultimately just a shaggy dog — or elephant — story about the ways a handful of misfits can become family against very long odds.

The 100-Year-Old Man Who Climbed Out the Window and Disappeared. With Robert Gustafsson, Iwar Wiklander, David Wiberg. Directed by Felix Herngren. In Swedish and other languages, with subtitles. 114 minutes. Rated R. At Landmark Midtown Art Cinema.