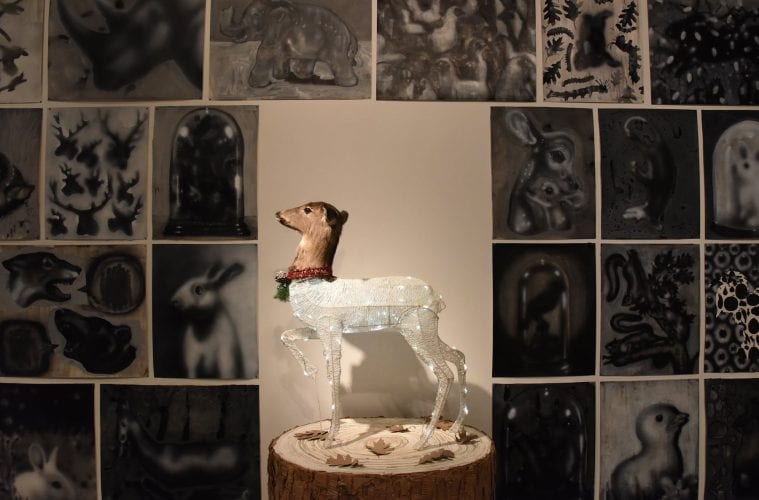 Review: The thought-provoking “Transitions: States of Being” tackles cultural appropriation

A collection of late 19th- and early 20th-century African ivories forms the still point of Transitions: States of Being, the latest thought-provoking exhibition at the Zuckerman Museum of Art at Kennesaw State University. Wall text in the galleries prompts viewers to consider how function and interpretation of such sought-after cultural objects have shifted from “objects of material culture to exported souvenirs to precious museum artifacts to contested museum artifacts.” Transitions explores the spectrum of possible answers to these questions by pairing these carved ivories with the works of nine contemporary artists whose concerns explore some of the same questions.

First, a little history: By the late 1800s, European powers had turned to Africa for natural resources and other exportable (exploitable) goods. With the Berlin Conference of 1884-1885, the climax in their scramble for territory, Western hunters, explorers, and profiteers flooded the continent in search of souvenirs, trophies and natural resources. The ivories and other objects included in this exhibition were collected a few decades later by Dimitri Ziros, grandfather of KSU Professor Emeritus Apostolos Ziros, who gifted them to the museum in 2006. Ziros gathered his collection on visits to the Mangbetu people of the Democratic Republic of Congo in 1910 and 1915. Carved elephant tusks, ivory hairpins, utensils, human and animal figures — and even, most painfully, a fly whisk made from an elephant tail — speak less to the idea of their cultural history than to the idea of commoditization. By the time Ziros collected these ivories,  the Mangbetu had already customized their aesthetic style to appeal to the Western desire for souvenirs.

What is desirable and why, and at what cost?

Transitions asks viewers to consider what potency is lost or diminished in the transition from revered cultural symbol to museum object. How does the transition through time, space and meaning affect how we view the objects and even how they are changed by it?  We need only consider the ritual objects of certain societies, African or Native American for instance, on display in our major museums to understand that something akin to a soul is lost by their appropriation by another society, regardless of motive.

The Zuckerman’s African ivories then, like many in private and institutional collections, arrived as souvenirs or trophies of colonial imperialism. The burgeoning market for anthropological and scientific pursuits that drove Western access into central Africa is a primary concern for Atlanta artist Joseph Peragine, whose work exemplifies his continuing preoccupation with taxidermy, natural history dioramas and the museums that house them. Some of the work here will be familiar to viewers who saw his recent Love Me Till My Heart Stops at Marcia Wood Gallery. There’s even a welcome reprise of the inimitable Squirrel Coat.

Peragine employs irony and humor to illustrate the perils in the effort to preserve and reproduce a formerly animate thing — whether animal or cultural object — and raises concerns about the institutional practices employed in doing so. In his statement included in the exhibition’s illuminating catalog, he writes that his attempts at taxidermy and diorama are “meant to be both endearing and simultaneously disappointing,” a perfect characterization of the sometimes ineffable gap between the real and the almost-real. Constance Thalken addresses these same issues of verisimilitude, of the lifeless taxidermied body to the animate one, in the gorgeously haunting photographs of her series Eyes Open Slowly. Thalken entered the world of taxidermy, she reports in her statement, to investigate “the idea of animal essence and the . . . complexities that arise from reanimations of that essence.” Her photographs of taxidermied animals reveal what is lost in the process of preserving the formerly living by turning it into an object to be possessed, a trophy. Beneath her deft subtlety, understanding of the intimacies of the body dawns gradually, but with a profound finality as, for instance, markings resembling the graphite scrawls of a Cy Twombly painting are revealed to be the hair (or fur) of an animal in close-up.

Mark Dion, represented here by a single lithograph, Phantoms of Lost Museums, 2014, explores ways in which public institutions and dominant ideologies shape our understanding of history. Though its inclusion makes perfect sense, Dion has nevertheless explored these ideas in much more effective and evocative ways. Think his Travels of William Bartram Reconsidered.

Bananas, 2013, Alexis Rockman’s watercolor, ink and gouache in brilliant reds and greens seduces, and maybe that’s the point. Just as the beauty of Thalken’s photographs reveals deeper truths, we are drawn to the lush beauty in Rockman’s painting only to discover disturbing allusions to the plantation slave economy of the 19th century when we see through it.

A small gallery wallpapered in disturbing images from Lynn Hershman Leeson considers a 21st-century approach to scientific advancement. Hybrid plants, animals, and even human limbs created through DNA manipulation, and other new technologies compound to heighten the sense of the unfamiliar suggesting that these interventions may prove to be just as seismic as was European incursion onto the African continent. Another form of incursion — this one due to effects of human migration and oppression — is examined with great technical skill by Danielle Roney in Refugee Conversations, a multi-channel video on two walls featuring the movement of trains and passengers filmed at the historic Sirkeci Station in Istanbul. The imagery was effective and often beautiful, but a selected reading in voiceover from Bertolt Brecht’s 1940 play of the same name, though integral to the video, provided a sometimes distracting overlap to the experience of other works in the same room. The subtle work of the always-pleasing Amy Pleasant, for instance, deserved a quieter room. Her disembodied body parts, portrayed in a series of paintings, sculptures, and works on paper, suggest fragmentary narratives and remind of the hazards of the artifact, historical or otherwise. We can’t know the whole from the parts no matter how interesting or appealing.

Transitions: States of Being asks worthy questions about the conditional nature of our understanding of cultural objects and serves best by reminding that the best questions are ultimately those for which we must continually search for or revise our answers.  Teresa Bramlette Reeves poses a few of her own in her wonderful essay in the exhibition catalog, Pollock and Soup Tureen (Traced), 1984/2013: An Abbreviated Biography. Reeves establishes an admittedly simplified set of guidelines for the biographical study of an object: 1. Where was the object “born” and under what conditions? 2. Where has it lived? 3. How has it changed? 4. How has it been understood over time?

By this rubric, Transitions provides a stimulating starting point from which to do the same.