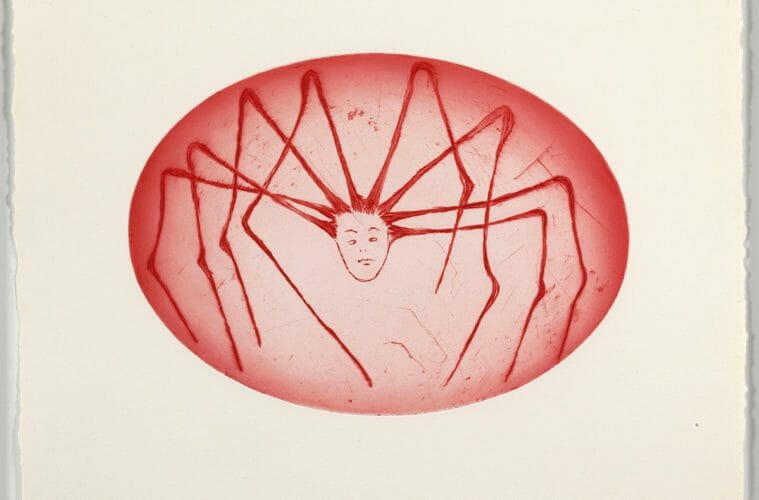 Review: Themes of motherhood, memory, pain in “The Labor of Remembrance”

Deanna SirlinSeptember 24, 2021
Art+DesignArt+Design - Featured
The Labor of Remembrance: Print and Textile Works by Louise Bourgeois is a thoughtful exhibition that addresses many of the artist’s seminal themes of spiders (who represent the mother), pregnancy and fertility, and the body and emotional and physical pain. On show through December 11 at Zuckerman Museum of Art at Kennesaw State University, the works are, as the title suggests, either prints or editioned textile-based works.

Bourgeois (1911–2010) was one of the most important artists of the 20th century. She was born in France to a family that repaired tapestries. In 1938, she married the American art historian Robert Goldwater and moved to New York City. Her artistic career lasted more than seven decades; her artwork addresses all the important movements of the 20th century: surrealism, abstraction, feminism and psychoanalytic theory. 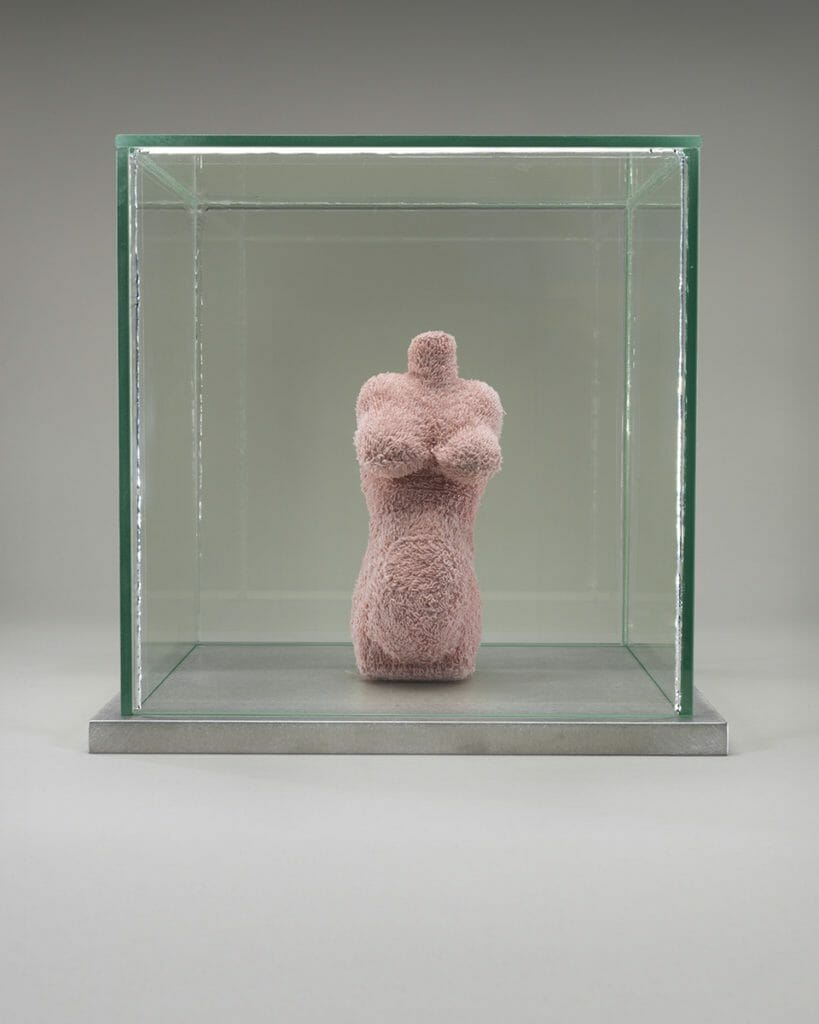 “Pregnant Woman,” 2002, fabric, glass and aluminum (Edition of six with one Artist’s Proof)

She is best known for her large sculptures of spiders and installation works that illuminate her own life with symbolic themes of motherhood, memory and the body. She mines her own traumatic childhood as subject matter, to address the primal emotions of loss and remembrance through symbolic forms, color and abstraction.

Upon entering the exhibition, one sees “Pregnant Woman,” 2002, which sits inside a glass vitrine on a pedestal. This work is a small pink fabric sculpture (12 inches high) of a headless and armless female torso clearly pregnant (as the title tells us) and covered in soft pink terrycloth, stuffed like a child’s toy.

Bourgeois repurposed many of her own household fabrics in her work; the terrycloth used here may have been one of her own washcloths or towels previously used to dry her own body.

This incorporation of a domestic linen that may have been used by the artist invites the viewer into an intimate relationship with this sculpture and, through it, with the artist. Even on a small scale, the sculpture projects a powerful symbol of a woman whose strength is codified by the straightness of the figure’s spine while clearly with child, an image of a strong maternal female.

Bourgeois often made artworks in many different media that center on pregnancy by representing the presence of a child in utero. “Pregnant Woman” recalls iconic fertility votives like the “Venus of Willendorf” made in the Paleolithic period more than 25,000 years ago. Its power comes from its intimacy and the artist’s lexicon of female form. 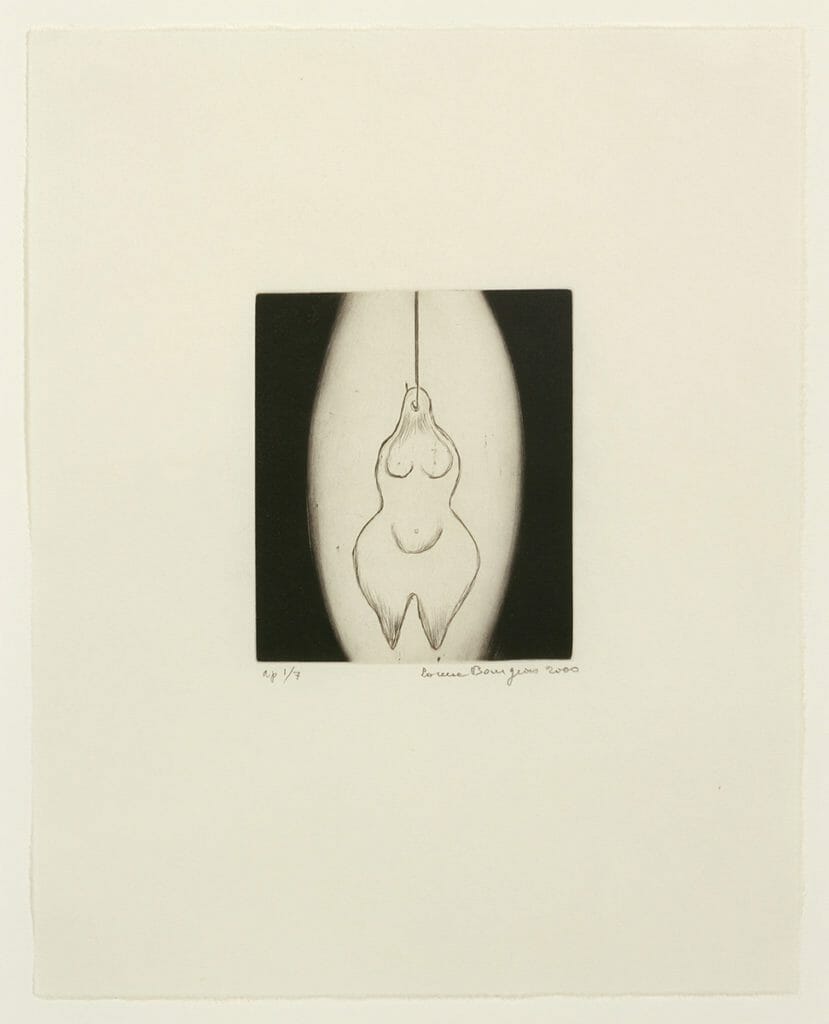 “Hanging Figure,” 2000, is a tonal black and white print that presents a headless, armless body like “Pregnant Woman,” but this female body is literally “on the hook,” suspended like a side of beef. The image evokes a frightening scenario of abuse or torture that provokes fear, anxiety and pain. The figure is drawn within an illuminated oval of light that has been carved out of a dark ground. It is presented in a frontal view; the viewer and the artist together confront this body, which is beyond repair.

There are several prints in the exhibition from the portfolio titled “La Réparation” (The Repair), 2001. The title refers to her mother, who repaired tapestries. Spiders repair and re-spin their webs when damaged. Bourgeois’ spiders are titled “Maman” (mother); like a spider, her mother was a weaver.

In “Spider Woman,” 2005, an egg-shaped horizontal oval contains a spider with a face. In “M is for Mother,” 2003, an undulating line drawing delineates a large letter M. These prints are printed in red ink, a signature color for the artist, the color associated with blood, guts and physicality and also with physical and psychological trauma.

Also an edition, “Ode à l’Oubli” (Ode to Forgetfulness) 2004, is a cloth-printed book with pages constructed on linen hand towels from Bourgeois’ 1938 wedding trousseau. Bourgeois first made the book in 2002 as an individual work. Working with master printer Judith Solodkin of Solo Impressions, she produced an edition of 25 books in linen with fabric and lithography and digital printing in 2004.

The cover and all of the pages are on view in the gallery, disassembled and framed on the wall. The book was bound with buttonholes so it could be taken apart and shown in this manner. The pages are appliqued and embroidered abstract compositions; the cover and the two pages of text are lithographed in red ink directly onto the monogrammed linen napkins that belonged to the artist. The text pages read “I Had a Flashback of Something that Never Existed” and “The Return of the Repressed.” The compositions are delightful patterns that repeat and play with shapes from checkerboards to eggs to circles that almost spiral. 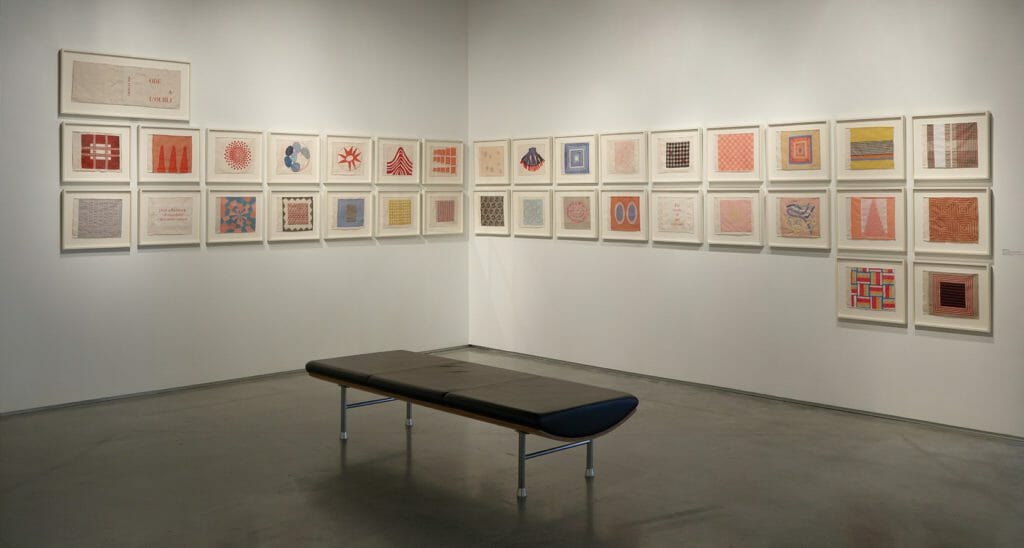 Some of Bourgeois’ works, seen here at the Zuckerman Museum, depict violence against women.

Bourgeois used shape as subject matter in her investigations of the body and nature. “Topiary: The Art of Improving Nature,” 1998, is a suite of nine prints etched with drypoint and aquatint that range from strangely cut bushes composed with poodle-like balls of scribbled leaves to figures that have amputated right legs. One might read these images as deriving from the artist’s childhood in France, when she saw soldiers returning from their service in the first World War. Bourgeois’ work is personal, yet her imagery resonates on a level far beyond the individual and changes the viewer’s perception of the world.