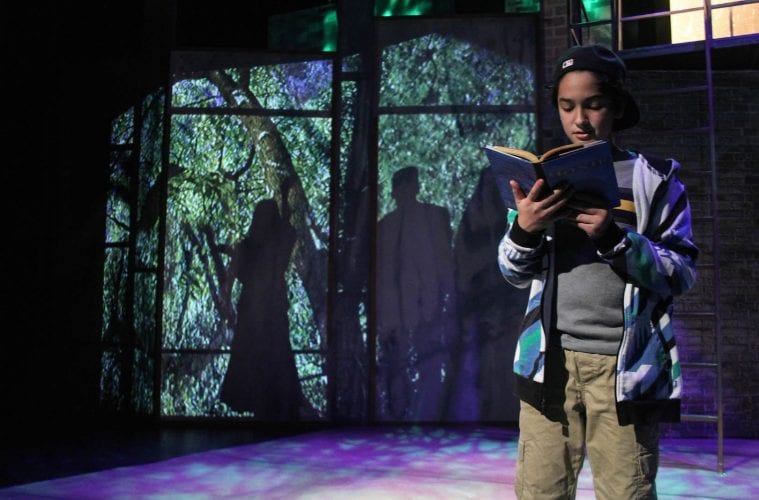 It begins simply enough, as a father in Afghanistan (Bobby Labartino) communicates with his son (Royce Mann) back home in the States by telling stories and creating a handmade book for him. Said book soon becomes the main character in Brian Kurlander and Lane Carlock’s new play Moxie, running through February 28 at Theatrical Outfit.

Developed as part of the inaugural Reiser Atlanta Artists Lab at the Alliance Theatre two years ago, and workshopped and tweaked a bit since, it’s a pet project for the playwrights, also both performers. Their world premiere is a likable enough production, but one that still feels a few versions away yet from hitting its stride.

The book in question snakes its way from Afghanistan to the likes of Paris and then India, where a Peace Corps volunteer (Maria Rodriguez-Sager) takes it back to the United States and to her elementary school classroom. The father has written an internal note to himself in the book to finish telling a story to his son, but others perceive it as a message to include their own tales inside, which they do.

How the book passes from hand to hand, accidentally at times, seem a little illogical, but it fits within the realm of the material. Among many sequences, the most vivid, by far, involves Marcus, a young African-American student (Jaden Robinson, best known for playing Tiny Tim in the Alliance Theatre’s A Christmas Carol) with a troubled home life who gets involved with a bookbinder (David de Vries) in Detroit. Their relationship is a bit unexpected and sweet, as the kid asks his elder for a favor. Another memorable sequence is between a Parisian grandmother (Carolyn Cook) dealing with dementia and mistaken identity. The opener, too, takes an unexpected turn that sets the play in action.

The problem here is that far too many of the other sequences seem episodic and underdeveloped. For a play about the power and strength of stories, many of these seem wan. A tragic turn of events three-quarters in seems more of a plot mechanism than what has come before. Moxie can also get a bit schmaltzy as well, with an ending that seems entirely too predictable.

The all-Atlanta cast is a busy one, including Tony Larkin and Danielle Deadwyler, who pop up in various roles. All have moments, but the standouts are Cook, de Vries and Robinson. Having performers take on numerous characters, in a sense, emphasizes the connective thread that runs through the piece, yet it can be a touch confusing as the actors pop in and out of sequences.

Director Elisa Carlson, who helmed The Guys at Theatrical Outfit a while back, helps establish location by working with lighting designer Mike Post on frequent projections that embellish the mood for each scene. Yet her work overall seems a little timid and indistinctive.

For a play about a book that travels across the globe and takes on some sort of mystical power, Moxie becomes surprisingly one note. It deals — theoretically — with such themes as the power of storytelling, loyalty, the power of words, fate and destiny. Yet its aim is higher than what it actually achieves.

Moxie is a terrific concept for a play but it needs some editing and a stronger structure. Kurlander and Carlock have worked hard on bringing this story to life; let’s hope they can eventually mold it into a more satisfying creation.