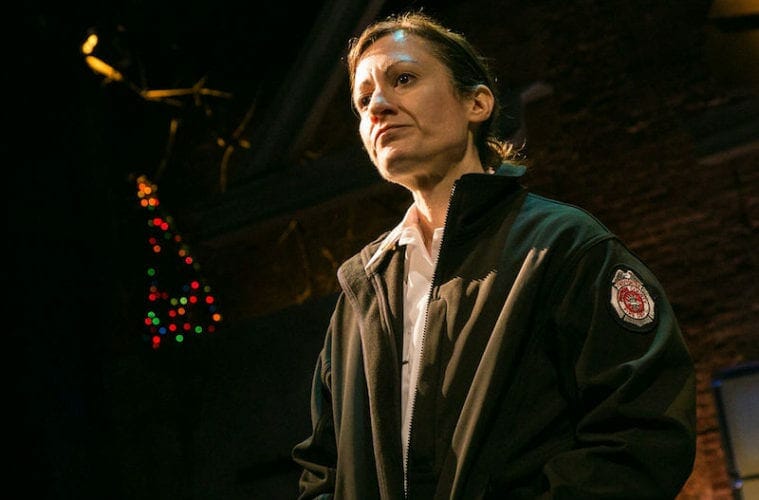 Daryl Lisa Fazio, also the "Safety Net" playwright, plays a firefighter in small-town Alabama who's on the front lines of the opioid epidemic. Her life is complicated by an ailing mother and an addict she recently rescued and took in. (Photos by Casey Gardner)

Turn on TV or the radio, scroll through any newsfeed, and it’s hard not find a story about who’s to blame for America’s opioid epidemic. Is it big pharma for making the medication so addictive? Is it the doctors who prescribe the pills in exchange for kickbacks? Maybe it’s the addicts themselves for their inability to pull it together after the corporations abandoned them? In her new play, Safety Net, Atlanta actor-writer Daryl Lisa Fazio attempts to humanize the headlines by telling one woman’s story, in a world premiere at Theatrical Outfit through November 10.

Chris Dove (Fazio), a firefighter in small-town Alabama, injects more Narcan than she fights flames. A beer after a 12-hour shift helps her keep work away from home, but when her aging mother (Carolyn Cook) and an addict she recently resuscitated (Rhyn McLemore Saver) move into her fixer-upper, the boundaries become harder to maintain, and tensions mount. They’re all grieving something — the loss of a sibling, the loss of independence and the loss of life as they knew it before addiction. Hopefully, the coping mechanisms they’ve adopted — baking, yoga and Mountain Dew — are enough to keep everyone on the straight and narrow. Fazio often writes about forgotten women. Her play Split in Three (Aurora Theatre, 2017) features three women in rural Mississippi, and The Flower Room (Actor’s Express, 2018) follows a female researcher’s journey to sexual freedom. This script is certainly in her wheelhouse, with its focus on women left to cope and fix things after all the men have succumbed to their vices. The drama was a finalist at the O’Neill National Playwrights Conference and was developed through the Alliance Theatre’s Reiser Atlanta Artists Lab.

Chris is the only woman in an overworked squad, as evidenced by the “#1 Mom” mug the guys leave on her desk. Between the emergency scanner and the junkies calling her cell phone for counseling, she never sleeps. This is reality for first responders across the country, those who step in where the government steps out. It’s an important story to tell, but this telling lacks some critical details. The most well-developed character is the recovering addict Val (Saver), but she’s not the lead. After two hours, we don’t know much more about Chris and her mother, Xenia (Cook), than we did before the curtain. Chris is meant to come off as repressed and tough, but since she’s the lead character, we need to know more about her than that she works constantly, compulsively lifts a dumbbell when she loses a patient and might be alcoholic. The same for Xenia. She’s funny, likes to cook and suffers from debilitating back pain, but what else? We know nothing about their desires, nor do we know what happened to make this town a place where 36 people died of opioid overdoses in a single month.

That said, Karen Robinson has the fun job of directing a talented, three-woman ensemble. I’m declaring Cook as Atlanta’s Meryl Streep because she nails it every time. Her Xenia is simultaneously humorous, endearing and heartbreaking. Saver plays Val as socially awkward to the extreme, which provides much needed comic relief. Fazio’s Chris is stoic yet sincere and renders a “leading lady” that’s refreshingly uncommon in American theater.

While seeing “Safety Net,” it’s hard to forget those suffering from chronic addiction just outside the Outfit’s downtown walls. It’s easy to see the opioid and heroin crises as rural Georgia’s problems, but Woodruff and Hurt parks — not far from the theater — are overrun with people getting high to cope with trauma. Childhood sexual abuse led Val to drugs, and the same may be true for many of the people we pass on the streets every day. Maybe plays like Safety Net will make it harder for the rest of us to cast them aside.