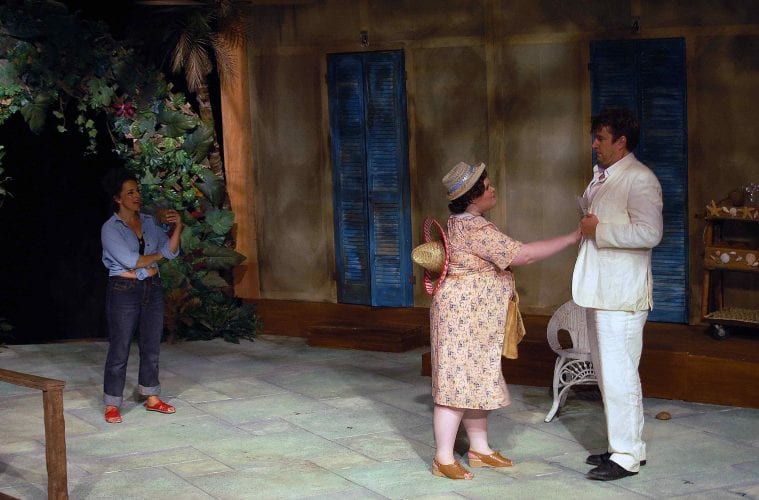 Review: Theatre Emory delivers with Tennessee Williams’ “The Night of the Iguana” Agnes Harty (from left), Emma Calabrese and Robin Bloodworth in "The Night of the Iguana." (Photo by Scott Wile)

Where “The Night of the Iguana” sits exactly in the career of Tennessee Williams is up for debate. Some call it a masterwork; others consider it a half-rung or so below the playwright’s acknowledged classics. It’s certainly a personal play for Williams, who was dealing with alcoholism and depression while writing it. In any case, Janice Akers is directing a standout version of the play at Theatre Emory, running through April 15.

“The Night of the Iguana” takes place at the Costa Verde Hotel on the west coast of Mexico in the 1940s. Maxine Faulk (Agnes Harty) runs the place solo. Her husband, Fred, has died recently and she seems a bit ambivalent about his passing, because their relationship had been rapidly spiraling downward. Popping up unexpectedly, as he seems to do every year or so, is the Rev. T. Lawrence Shannon (Robin Bloodworth), a former minister who now works as a tour guide and has been on the edge of a breakdown for a while. Accused of statutory rape by a young woman who happens to be on this tour, Shannon is doing his best to avoid her.

Also showing up out of the blue are Hannah Jelkes (Madeline Teissler) and her grandfather, Nonno (Tim McDonough), who ask to stay the night. The 97-year-old Nonno is a poet of some note and Hannah is an artist who sketches for money. Maxine eventually agrees to give them rooms, even when she realizes they have limited funds. Maxine doesn’t take to Hannah at all, perhaps seeing her as a threat to Shannon, whom she craves herself, minus the drama behind his appearances.

The first act is busy and lively. Akers makes terrific use of the space (kudos to Sara Culpepper’s set) and gives “Iguana” verve and atmosphere, from the flop sweat clinging to the actors and the fans blowing non-stop to the weaving in and out of Maxine’s staff and other guests to the sight of hotel workers capturing and tying up an iguana beneath the veranda. A storm is particularly well staged, becoming a visceral, highly theatrical experience.

In sharp contrast, the second act, taking place the same evening, is more subdued and quiet. It culminates in a lengthy conversation between Lawrence and Hannah, where he begins to discover a bond with this woman that he didn’t think was possible. The focus is on these two; most of the other characters disappear for a while. If that sequence doesn’t flow quite as easily as the first hour and a half, and the symbolism of the iguana flopping around at the end of its rope comes a little too blatantly, it’s held together by the acting.

Akers uses a combination of professional actors and Emory staffers and students to good advantage. Harty is an actress who brings earthiness and believability to whatever she does. Her Maxine is funny, gruff and lonely. Harty is also a terrific ensemble player who doesn’t try to overpower scenes and can fascinate even when listening and reacting to other players.

From the minute he shows up, Bloodworth’s Shannon looks as if he hasn’t slept in weeks. He captures the character’s inner demons; like a caged animal, he is fidgety and about to lose control. He and Harty are especially adept working with and against each other. McDonough has some fine moments as well in the small role of Nonno.

If the younger actors understandably don’t have the presence of their professional counterparts, Teissler makes a suitable Hannah, even if she seems too young for the role. The character seems a little duplicitous at first, and hard to read, but Teissler gives Hannah grace, and her simplicity brings out something in Lawrence that he seems to have lost.

At three hours, “The Night of the Iguana” is leisurely done and full of detail, but don’t let the running time intimidate. It goes down better than, say, the recent touring version of “Billy Elliot.”

Near the end of the play, Hannah says her that her grandfather is a minor league poet with a major league spark. The same can be said for this production. Even those who regard “The Night of the Iguana” as Williams-lite will be taken by what Akers and her cast deliver.