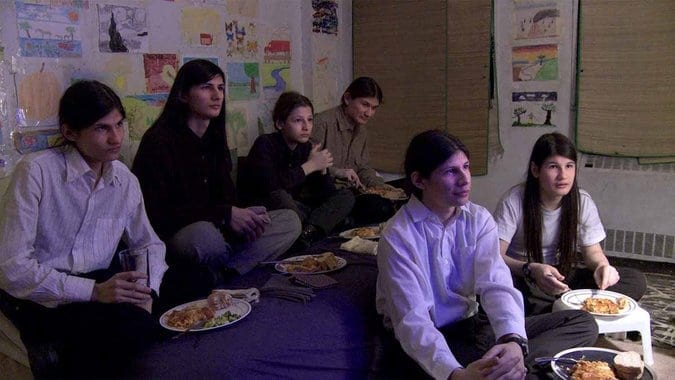 The Angulo kids were homeschooled and their only interaction with the world was through movies.

Review: “The Wolfpack” tells a compelling brother saga but fails to ask the tough questions

So you’re walking down a Manhattan sidewalk and encounter this gang of six, strangely ethereal teenage boys wearing sunglasses with black hair swagging down their backs. Though you live in New York, you’ve totally never seen anything like this, so you go — “What?” Then you go, “Dudes, who are you?”

Which, basically, is what Crystal Moselle did. It just so happened that she was also a young documentary filmmaker. And this was one of the early, rare times when these boys, these brothers, had staged a quiet, fierce rebellion by walking out of their low-income, Lower East Side high-rise against the will of their wacko dad.

Right time, right place, as they say — for the Angulo brothers and the neophyte filmmaker. The result is the fascinating but deeply flawed documentary The Wolfpack.

For the record, the boys’ names all derive from the Hare Krishna faith. They are Bhagavan, Govinda, Jagadisa, Krsna, Mukunda and Narayana. But we first see them enacting the roles of Messrs. White, Orange, Blonde, Pink, etc., the characters in Quentin Tarantino’s Reservoir Dogs, one of the many genre films the boys watched on video growing up — a warped window on a world their South American father refused to let them engage with directly. They were homeschooled by their American-born mother, and almost never left their apartment.

Instead, they grew up on a steady diet of Tarantino and David Lynch movies, memorizing and then reenacting them. The boys’ talent at turning everyday objects into believable, or at least eye-catching, props and costumes is really impressive.

In a nice riposte to those who periodically blame violent movies for violent actions in real life, it was watching the Batman flick The Dark Knight that gave Mukunda the inspiration to sneak out of the family high-rise building and explore New York on his own. Unfortunately, on his wanders, he wore a hand-made Michael Myers mask (you know, the killer from Halloween?).

Police, called by unnerved Manhattan citizens, intervened. So did mental health workers. The upside? The young man’s itch for freedom quickly infected his brothers. Soon, insurrection against their father was in the air.

About time. The movie makes you wonder why the kids were allowed to remain in the care of their parents. The boys’ father and mother both speak in terms of things that “didn’t happen,” like raising their kids in the countryside or moving to Scandinavia — things they couldn’t afford to do.

There’s a self-created victimization to their viewpoint, as if disappointments were repeatedly inflicted on them. In fact, if Dad had bothered to get a job and make money for his family instead of boasting that he refuses to be “a slave to society,” or if Mom had summoned up the guts to get the front door key and let her children out into the world, things would have been very different.

The father seems to have legitimate mental health issues, seen on camera saying, “My power is influencing everybody.” The mother, who has spent decades almost as confined as the children, also seems, well, a little touched — even if it’s only an extreme example of Stockholm Syndrome.

What’s amazing is that their six sons (there’s also a daughter, who never speaks and seems to have socialization problems) turned out so charming, though raised on a diet of empty-calorie movies. That explains why the distributors of The Wolfpack are spinning it as a celebration of the inspirational power of film. That’s probably because there isn’t a better angle to go with.

The movie doesn’t dig into the deeper, disturbing currents of the family’s story. Yes, movies inspired these kids, but that’s because movies were one of the few things that were allowed into their lives. Books, paint or even a box of sand might have been just as inspirational for boys trying to develop their eager young minds in the vacuum/prison created for them by their parents.

The movie is, in fact, so “polite” and so fly-on-the-wall, it kind of made me angry. Not because I thought the filmmakers were choosing not to ask tough questions, but because I wasn’t sure that director Moselle even understood that asking tough questions — instead of just pointing the camera and gathering footage — was an option that could have deepened her film, and made it a little more dangerous.

The story is great. The movie, not so much. It’s as undernourished as these kids have been for most of their lives. The story sticks with you, but mainly because of all the questions it raises and never addresses. When, finally, the boys, now young adults, visit the countryside they’ve never seen before, one of them makes the only comparison he knows — to Fangorn Forest in the Lord of the Rings movies. Another, watching grass blowing in the breeze, marvels: “That is like 3-D, man!”

It’s a moment both very sweet and profoundly sad.