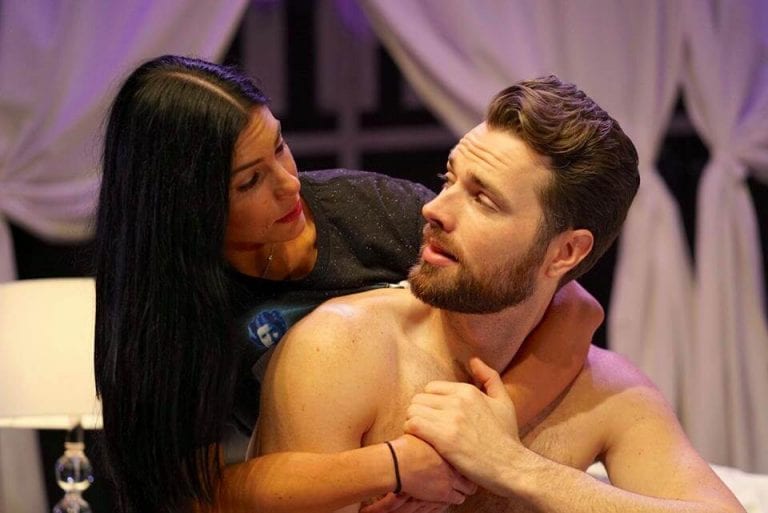 The story of taboo love between stepsiblings feels forced, especially when it evokes Oscar Wilde. (Photo by Courtney Lynn Lakin.)

Review: In “The Way We Get By,” stand-out acting can’t overcome a paltry premise

It’s been said that the war between the sexes is the only conflict in which both sides sleep with the enemy on a regular basis. If you can imagine that witticism as a play, you’ll have something of the idea behind Neil LaBute’s 2015 dramatic comedy The Way We Get By, which is having its Atlanta premiere at Pinch ‘n’ Ouch Theatre through November 11.

The opening finds Doug (Grant McGowan) waking up in the apartment of enemy combatant Beth (Jackie Costello) after the two have shared a drunken one-night stand following a wedding reception. Beth eventually rouses, too, and though things seem playful enough at first, we discover that the two have very different expectations for what the morning — and their possible future together beyond it — will hold. We also slowly learn that the two have a past together, as well, a past that brought them together even as it now threatens to keep them apart.

LaBute milks a lot of drama and humor from the pressure-cooker situation of a two-person play. The Pinch ‘n’ Ouch stage, located in a contemporary loft-style condo living room, has never seemed more perfect. But part of the problem here is that from the outset we know there are only two possible outcomes in a two-character romance: the couple will either get together or they’ll part. There were moments I was curious, or hopeful, or pessimistic, but more often I simply wanted them to hurry up and decide, and overall, I found I didn’t care that much one way or the other what they chose. There’s certainly something at stake here, but not a whole lot.

Although (spoiler alert, this revelation comes about midway through the play) Beth and Doug grew up in the same household due to their parents’ remarriage (his father, her mom), they’re unrelated by blood. Still, they hesitate at the thought of becoming a couple due to the social opprobrium they fear will come their way. But that sort of hesitation in matters of the heart isn’t particularly attractive or sympathetic in stage characters, and the threatened social disapproval here seems particularly mild as a social force to keep them apart. Once the people around them remember and acknowledge that they’re actually unrelated, their late-blossoming romance is likely to simply seem a little strange, perhaps quirkily charming, even sweet.

But in annoying written text projected in supertitles above the stage before the show begins, LaBute draws parallels between the action and Oscar Wilde and “the love that dare not speak its name.” Wilde went to prison for two frigging years, a fate that’s unlikely to befall Doug and Beth. They won’t face real discrimination at all or even lose much social status by becoming a couple (if anything, they might gain a bit; people like a couple with an interesting backstory). Their reflexive, self-protective insulation to keep from getting hurt is certainly a powerful internal force preventing them from diving into romantic risk, but that doesn’t merit comparison to the centuries of abuse aimed at gay and lesbian people. Indeed, one is tempted to say that the comparison is offensive, but I don’t think anyone will care enough to be offended.

In other words, LaBute can be maddeningly provocative in interesting ways in his other plays and films, but here the strategy falls short with a thud. The Wilde comparison seems tacked onto unrelated action, and if anything, the device makes you wonder why LaBute’s take on Doug and Beth is so gentle, when their self-pity, self-doubt and self-absorption all deserve to be scrutinized under his usually harsher, more unsparing, misanthropic lens. I longed for the characters to be tougher and for LaBute to be tougher on them.

The end of the play is refreshingly upbeat and hopeful compared to some of his other work, and the two actors make the closing moments the most convincing and interesting part of the show. But the fun of it rests on Beth’s liberation from an overbearing roommate, an outcome which ultimately lacks the heft and resonance on which to build a truly satisfying ending.

McGowan and Costello give excellent performances; Doug’s hesitation and aloofness paired with his willingness to stay in Beth’s apartment might otherwise seem baffling, but McGowan makes it all believable, even sensible, and Costello captures something of Beth’s confidence and independence flip-sided by her uncertainty and neediness: as the character rails against the skimpy, oversexualized outfits of models in magazine ads, she rushes to dress the same in order to convince Doug to stay.

But unfortunately, in the end, good performances can only highlight the shortcomings of a paltry script. The Way We Get By tries to get by on a sunny outlook, but perhaps the more customary misanthropy of previous works is simply LaBute’s style.