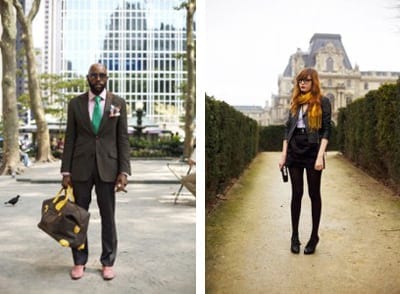 Review: The Sartorialist knows that clothes make the man/woman, at Hagedorn Gallery

There is only one week left to see Scott Schuman’s remarkable portrait photographs at Hagedorn Foundation Gallery. Originally published on his now legendary blog The Sartorialist, and now available in a handsome paperback from Penguin, they are better seen in these 11-by-17-inch prints, because the small details matter. Schuman is almost worshipped as a guru of cutting-edge fashion trends, his business being the spotting of trends before anyone else realizes they might be trendy. He does this on The Sartorialist blog by capturing brilliant moments of personal style encountered on the streets of New York, Milan, London or Paris.

His ambitions, though, are more like those of the great German documentarian August Sander, who in the 1920s set out to create a photographic record of all the echelons of life in the Weimar Republic by making portraits of people in their work attire and daily setting, whether a butcher shop or the German Parliament. Schuman is making something more like a record of the shape of the stylistic imagination in the early 21st century. His subjects reveal significant aspects of their personalities in their choice of clothes, all of which choices involve more than following the trends that already exist. Schuman records these trend-buckers or trend-makers in ways that show his attention to previous generations of documentary portraitists, Sander being only one of them. He places his subjects in their urban context, occasionally inserting wry humor and always encouraging a type of pose that distinguishes these photos from a simple fashion shoot (which he also does on a regular basis).

The humor can be as blatant as positioning his unsmiling red-and-black-clad subject in front of the initial letter of a red “DANGER” sign, making it “ANGER.” It can also be as subtle as the stunning image of a black-hooded woman in a wintry park in front of a white marble statue of a robed figure. It all looks very funereal until you realize that the woman’s downcast gaze is focused on the screen of the communication device cupped in her hands. But mostly there are no jokes, just inventively revelatory moments. Occasionally the combination of costume and setting evokes something elusively essential — it’s difficult to say what’s going on in the juxtaposition of allée and elements of dress in the portrait of a young woman wearing black glasses that both contrast with and complement the multiple tones of black in her garments, but it all says “Paris, 2008,” a title shared, unfortunately, by other photographs here. (Art historians will find it difficult to discuss Schuman without using copious illustrations.) Sometimes the social clues in these photos are systematically misleading. One overworked newspaper critic in New York was fooled by the knit cap and salt-and-pepper beard of a member of Ralph Lauren’s creative department, whose nod to homeless-man chic is almost faultless. The only giveaways as to the man’s actual status are the insouciantly tied neck scarf and the Malevich-model patchwork on the khaki trousers. Even the shoes are faultlessly scuffed.