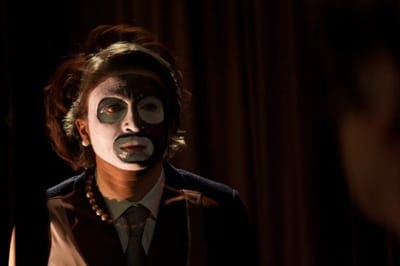 Review: The political is personal and vice versa in McCallum and Tarry’s “Evenly Yoked” at Spelman

The personal is political in the work of Jacqueline Tarry and Bradley McCallum. The interracial couple, best known for powerful evocations of racial issues, explore the relationships among history, visual media and memory in “Evenly Yoked,” their absorbing exhibition at the Spelman College Museum of Fine Art.

As I wrote in my AJC review, the exhibition, a six-year survey, introduces a new theme: race and entertainment. “In the ‘Projections’ series, strikingly composed and deliberately blurred images such as Eddie Cantor in blackface, Bill “Bojangles” Robinson on stage and stills from films such as ‘Imitation of Life’ prompt thoughts about identity, stereotyping and the metaphor of the mask.”

You might also say, however, that the political is personal. In their video performances, Tarry and McCallum use their bodies as medium and their marriage as fulcrum to explore universal aspects of love, marriage and family.

In “Otis: some thoughts on being a separate human being” (2004), Tarry’s solo video, the pregnant artist rehearses a host of stock parental phrases threatening physical abuse (“You want something to cry about? I’ll give you something to cry about!”) while tenderly stroking her bulging belly.

“Topsy Turvy” (2006), “Cut” (2006) and “Evenly Yoked” (2010) offer dramatic metaphors for the tensions between otherness and oneness, dependence and independence.

The pieces simmer in sensuality and ambivalence, tenderness and violence. In a sequence in “Evenly Yoked,” McCallum tightly cinches Tarry’s corset: the ties that bind bring comfort and pain.