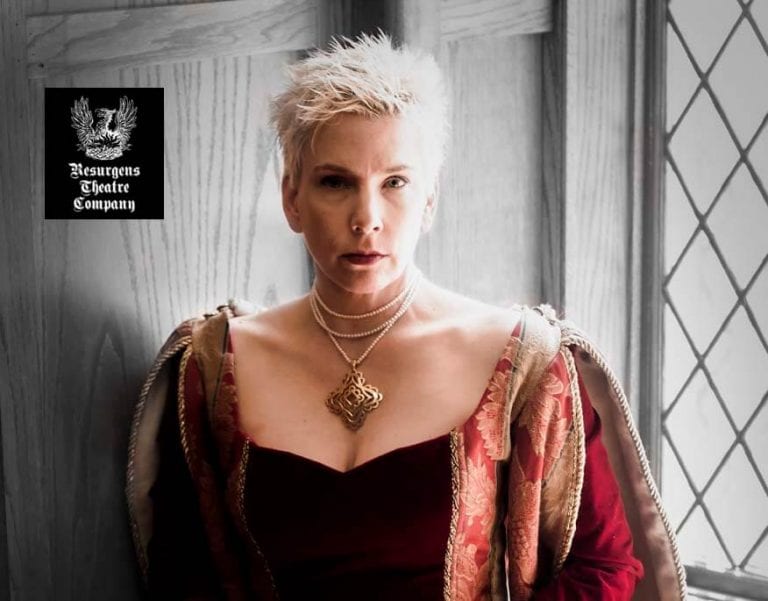 Review: “The Duchess of Malfi” gets a sinister and “deliciously bizarre” rebirth at Resurgens

Hamlet famously describes the world as an “unweeded garden” full of “things rank and gross in nature.” The thought was instigated by the poisonous mood in that play’s Denmark, but the character could just as easily have been describing the atmosphere in John Webster’s The Duchess of Malfi, a show which hit London stages two decades after Shakespeare’s tragedy, seemingly to satisfy theatergoers’ enduring taste for stories of dark and bloody revenge. A fittingly sinister and lively production from the Resurgens Theatre Company, currently running at the Shakespeare Tavern through April 7, reveals that as gardens grow, Webster’s was certainly among the rankest.

In the play, the recently widowed Duchess (Laura Cole) secretly falls in love with and marries her lowly steward Antonio (Stuart McDaniel). Her corrupt brothers Ferdinand (Thom Gillot) and the Cardinal (J. Tony Brown) are angered by her second marriage, which they’ve explicitly forbidden, and her subsequent bearing of children with her social inferior. Together with the deeply cynical servant Daniel de Bosola (Brent Griffin, who is also the theater’s artistic director), they plot a macabre revenge that slowly but surely ensnares more intrigue, violence and deaths, including their own, into its elaborate web.

As the central couple, McDaniel and Cole give a crucial likeability to the Duchess and Antonio. Though we know that things will turn out badly for them, their touching enactment of the romance between the characters evinces a faint hope that they might survive in a brutal world. As their courtship progresses, Cole as the Duchess removes her wig of youthful blond hair, revealing a shorn head of platinum gray, a touching gesture of honesty toward her partner. It’s a small but effective overarching visual touch that highlights the character’s modernity, maturity, resolve and agency.

Cole, like much of the rest of the strong cast, opts for a similarly plain-spoken, unpretentious approach to the role and to Webster’s poetic language, which makes the often Byzantine action compellingly easy to follow. There are other inventive directorial touches such as when the Duchess spots her brother sneaking into her bed chamber in a hand mirror, or when musician Matthew Trautwein plays haunting interscene music on a period stringed instrument.

Other elements, such as the sung numbers, work less effectively. As an original practice performance, the play is performed in an unchangingly, evenly lit house that emulates candlelight. But a central meeting of Ferdinand and the Duchess in Act IV that should register as horrific and terrifying doesn’t quite take off (the action is referred to by the characters as occurring in darkness, and the gruesome trick that unfolds could only work in the dark: elaborate lighting effects may not have been the order of the day in the 1600s, but certainly a relatively dark stage could be, and likely was, achieved indoors). Most frustratingly, several times characters parted the curtains on the little frons scenae at the back of the stage to reveal something I couldn’t see because of the theater’s sightlines and the depth of that architectural element.

Webster’s play is more than 400 years old, and 17th-century attention spans were, it goes without saying, different from our own: the play, in spite of its swiftly moving plot and deliciously bizarre Grand Guignol developments, inevitably has its slow moments. A group of kids in front of me seemed bored to tears, in spite of the fact that the play is full of all the things children love. Still, for adults in the right mood, the poisonous fruit from Webster’s grim garden, brought compellingly to life by the company, may just hit the spot.