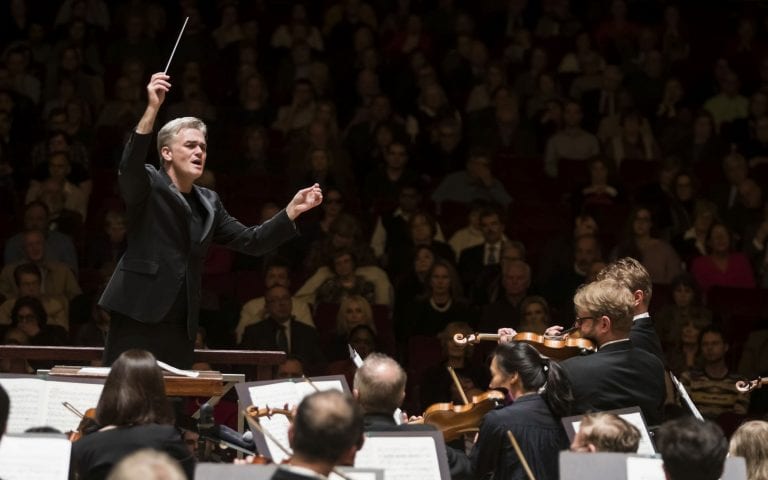 Gardner and the ASO opened the program with Rachmaninoff’s “Isle of the Dead.” The 1908–09 tone poem was inspired by an eponymous set of paintings and prints by Swiss symbolist artist Arnold Böcklin — in particular, a black and white print that impressed the composer far more than one of the original paintings he would have chance to view later. While Böcklin himself gave no explanation about the paintings, Rachmaninoff’s music follows a common interpretation: an allegory of the mythical boatman Charon transporting the dead along the river Styx to the underworld. The performance was evocatively dark in its coloration, rising and falling in swells to an intense climax that ultimately worked its way back down to a quiet ending.

The program continued with Trpčeski (pronounced “terp-CHESS-kee”) joining Gardner and the ASO as soloist for Rachmaninoff’s Piano Concerto No. 4. Curiously, the last time the ASO played the piece in 2011, it was also Trpčeski who was soloist, with Julian Kuerti as guest conductor. Trpčeski has been a guest with the ASO since then, most recently in 2017, but it feels unusual for a soloist to play the same work with the same orchestra yet again when they could be freshly heard performing a different work.

There is a general consensus among lovers of Rachmoninoff’s music that No. 4 is the least admired of his four piano concertos. It’s a more compressed work than the others, although the motions of grandiosity and emotional flexings that typify his style are not sacrificed. The orchestral part had heft, overwhelming Trpčeski’s solo piano part when performed with the ASO in 2011. In Thursday’s performance, there was no such problem — Trpčeski’s agile, dynamic pianism was boldly heard against the orchestral forces.

Following several ovations, Trpčeski returned for an encore, which he humbly did not play alone. The pianist invited ASO concertmaster David Coucheron to share the stage in performing Rachmaninoff’s famous “Vocalise.”

The concert concluded with “Symphonic Dances,” Rachmaninoff’s final, late-life composition. It’s familiar territory for the ASO, long a part of their repertoire. The ASO recorded the piece in 2011 for ASO Media with Robert Spano conducting, and it was performed live most recently last season with Spano again at the helm.

Gardner led a meaty reading, which was no letdown in power from the preceding Piano Concerto but seemed to lack the leaner sparkle of Spano’s guidance in both the recording and recollections of the 2017 performance.

Thursday’s concert was a compelling performance, even if feeling a little reliant upon volumetric over-the-topness at the end. A greater leanness to the orchestra’s overall muscular sound would have clarified and brought more tensile strength to Rachmaninoff’s music. Nevertheless, Gardner’s approach was a valid one that still made the grade for an engaging performance.