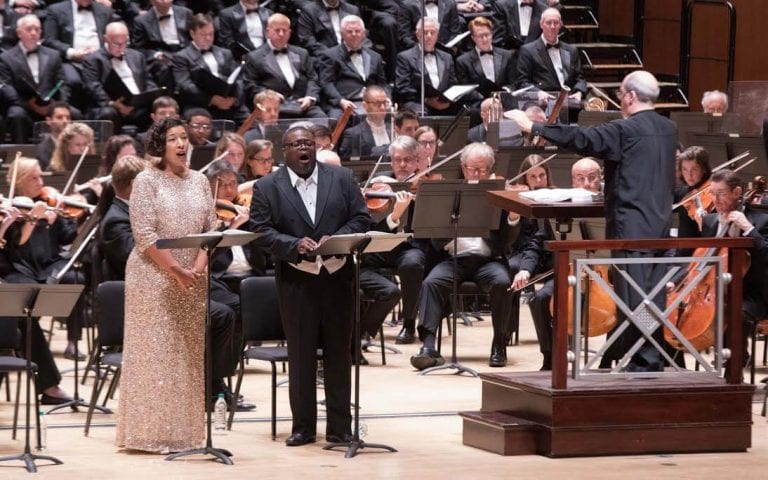 Although it was an unstaged concert version, the ASO’s performance was beautifully executed, the music carrying the emotions and drama forward as the unseen “stage” for the verbal story line that is sung in Italian and projected as English supertitles above. Based upon and largely faithful to Shakespeare’s play, Othello, the libretto for Verdi’s Otello, by Arrigo Boito, makes a few tweaks to the story, leaving out the Bard’s first act entirely plus the roles of Brabantio, Desdemona’s father, and Cassio’s actual love, Bianca, who is only mentioned but never seen.

The concert will be repeated tonight in a rare Tuesday performance.

Absent Shakespeare’s first act, Act I of Verdi’s opera opens with a raging storm as Montano, Cassio, Iago, Roderigo and the chorus of Cypriots await the arrival of Otello, a Moorish general of the Venetian armies who has been appointed the new governor of Cyprus — in a time when control of the island by the Republic of Venice was militarily contested by the Ottoman Turks, but the Turks, in this instance, have been defeated by Otello.

Verdi gives the chorus an extensive role in this opening act, and the ASO Chorus, prepared by Norman Mackenzie, and much larger than any actual opera chorus would be, drives much of the energy here in “Una vela! Una vela!” (“A sail! A sail!”) that opens Scene 1 in the midst of the whirling storm, anticipating the arrival of Otello. They join in celebration with Otello, as he enters, at the defeat of the Turks in “Esultate! L’orgoglio musulmano sepolto è in mar” (“Rejoice! The Muslim’s pride is buried in the sea”), presumably by the storm itself as much as anything, then in the following bonfire chorus “Fuoco di gioia!” (“Fire of joy”). Amid this, the soloists currently on stage set the foundations for their characters and the initial conflicts that propel the ensuing plot.

As Russell Thomas noted in a recent ArtsATL interview, he makes his debut as Otello in this production. Thomas makes a strong showing of it, giving Otello a more lyrical quality than the more purely forceful approach more commonly heard in this physically demanding role — much to his vocal advantage as well as more sympathetic feeling for this lead role.

There are two other principal roles that bear the brunt of the singing. Otello’s wife Desdemona, winningly sung by soprano Mary Elizabeth Williams, a Philadelphia native now living in Italy, who has capacity for both high-powered passion and ability to angelically float the high notes when required. Ensign Iago is sizzlingly sung as a truly evil villain by baritone Nmon Ford. Local opera-goers will remember Williams from her 2010 Atlanta Opera debut in the title role of Aida. Ford is familiar to ASO audiences through multiple performances and recordings with the orchestra.

The interplay between these three form the crux of the drama, and even if one is familiar with the opera, it is worth reexamining a comparison of the tragic flaws of Otello and Iago. Otello’s character flaw is jealousy borne of doubt; Iago’s is envy borne of certainty. Although jealousy and envy are all-too-commonly conflated in modern common conversation, a distinction is valuable here: jealousy involves the fear of losing something one already has to another; envy covets that which one does not possess but feels is deserved.

Iago recognizes his own treachery, chalking it up to a fate he must follow. He is outraged by the fact that the younger Cassio (tenor Ben Bliss) is promoted to captain by Otello when he feels the promotion should have been his own instead. One wonders what other grudges he may have against those around him, particularly Otello, whose military honors abound. But Iago is wrongly perceived as “honest Iago” by them — especially by Otello.

Despite having every acclaim as a hero, Otello does not fear loss of that, but the loss of the love of Desdemona. Iago gradually tricks Otello into wrongly believing Desdemona is being unfaithful with Cassio. As consequence, Otello becomes more mistrustful of her. Although Otello and Desdemona end Act I with an extended love duet, “Già nella notte densa s’estingue ogni clamor” (“Now in the dark night all noise is silenced”), by the end of Act II Otello and Iago are singing a duet, a vow of vengeance: “Sì, pel ciel marmoreo giuro” (“Yes, by the marble heavens I swear”).

Empathy for the innocent Desdemona peaks in the more intimate Act IV as her fears foreshadow an impending death, and she sings a prayer (“Ave Maria”) before she is murdered by Otello, even though he still loves her. She forgives him, but it proves too late to avoid the tragedy; Iago’s treachery is only revealed to the company after Otello kills her. In his grief and remorse, Otello commits suicide.

The other four soloists are bass Arthur Woodley as Lodovico, mezzo-soprano Kathryn Leemhuis as Emilia, tenor Miles Mykkanen as Roderigo, and bass Norman Garrett as Montano. They round out well the singing and playing out of the drama as supporting cast members.

Spano and the ASO held the musical fiber of the show together with acumen and passion, despite the physical demands and duration — twice as much total music as would normally be performed in an ASO concert. Although one might miss the theatrical elements of a fully staged opera, the musical results themselves were worth the long evening.