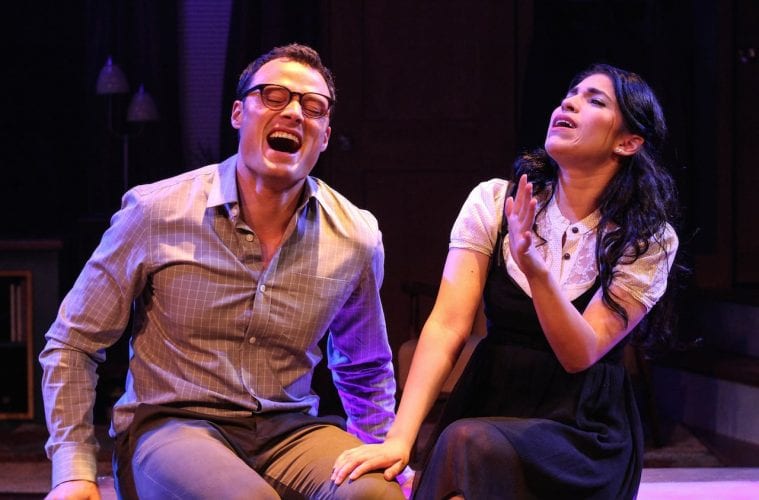 Review: Ten years past its prime, “Significant Other” comes across like a long pity party

With Joshua Harmon’s Bad Jews a commercial success for Actor’s Express recently, the company has now turned to another work from the playwright, Significant Other, running through June 19 in its first staging outside of New York. It’s the tale of young gay man Jordan (Lee Osorio) in the Big Apple dealing with a scary dating world — as well as three female friends (played by Diany Rodriguez, Cara Mantella and Brittany Inge) who are getting married one by one. ArtsATL critics Andrew Alexander and Jim Farmer caught the show opening weekend and share their thoughts.

Jim Farmer: Hi, Andrew! So I know we both saw Significant Other. I am curious to hear what you thought. I’ll start. I so wanted to like this, but I just didn’t care for it. I found it retro, something that feels like it should have been staged 10 years ago. Heck, maybe 20 years ago. It’s a little more complex than its early stages lead on, but not enough to make much of an impression on me. Your take?

Andrew Alexander: I think I liked it a little better than you did, but I definitely see where you’re coming from. This was fluff. Not every show has to be the next Ibsen masterpiece of course, but it was still surprising how many overly familiar romantic comedy tropes are in the show. There are the drunken bridal parties, the awkward first date, the office crush, the worries about being fat, the disastrous email, the cheesily romantic pop song and on and on. How many of these have we seen used a gazillion times? In the show’s defense, playwright Joshua Harmon does employ these tropes well — it’s a long show but I was entertained. You couldn’t ask for a better cast, and Lee Osorio is adorable as the main character Jordan. It’s interesting to bring the gay character, who is usually on the sidelines in these stories, into the center. But all in all, it was pretty fluffy, even as fluff goes. Clearly, we’re not big fans of this one, but was there anything you admired? The thing doesn’t hit the intellect or stir the heart in a big way, but were you at least entertained?

Farmer: Argh. I can’t say that I was. Look, I like romantic comedy as much as anyone, probably even more so. I thought some of the female friends had some fun moments, and I loved Jeremy Aggers as a gay co-worker. But I just didn’t think that the lead had any dimensions to him. He’s a young man looking for Mr. Right. I saw no other visible characteristics. For me, this turned from middling romantic fluff to something darker and unpleasant late in the second act. Jordan confronts Laura (Rodriguez) in a really nasty verbal exchange. He sinks his daggers in pretty low and when he did, I lost any bit of interest or sympathy for him.

Her response is dead-on. She admonishes him for his “pity party.” The play, to me, seemed just that — a two-and-a-half hour pity party, and a slow one at that. What did you think of that moment?

Alexander: It’s funny you hated Jordan when he confronted Laura. I thought that’s when he had a moment of dignity, when he objected to being the “court jester” for this group of self-absorbed, privileged heterosexual women. This isn’t at all my usual line of criticism, but other than that moment, the whole thing — Jordan and his worries included — made me think of that phrase “first world problems.” It’s interesting you mentioned this might have more productively reached the stage 10 years ago. It takes time to bring a play to the stage so I almost wonder if, in development a few years ago, this play wasn’t a slightly more political story about a guy who couldn’t marry, not just because he couldn’t find Mr. Right but because the system, legally and culturally, was stacked against him. The bridesmaids parties and lonely hearts wedding dances would have taken on a very different resonance. But in June 2015, in a stroke, the system changes, and that play is suddenly dated. It’s revised, still a charming interesting romantic story, but it has its real dramatic sting and raison d’être removed. Anyway, that’s just a guess.

Farmer: I think Jordan is the one who is most self-absorbed. Kiki (Mantella) mentions early on that she wasn’t looking when she found love. Jordan doesn’t take that cue. His every waking moment cries out: “I need a man! I need a man!” He is young, dealing with self-esteem issues and trying to find his identity. And dating is tough for anyone, gay or straight, young or old, whether you are living in Des Moines or New York. I get that. Jordan wore out his welcome with me, though. I wanted to say, “You’re 29, attractive, intelligent and living in New York — and you act like there are no gay men around? Puh-lease.” He’s on Facebook, texts a lot, but isn’t on a dating/cruising app? Seriously? He must be one of the few single gay men not on any app like that. If he turned on Grindr, he would find 2,300 gay men within 80 feet of him in Manhattan. Maybe not all are date material, but at least some would be possibilities to stop his whining.

Alexander: The whining got to me, too, but I do think Jordan’s troubles (and his way of speaking about them, even his and his friends’ self-absorption) are actually all pretty common. Doesn’t make them interesting, but it was believable to me. What do you think of Harmon’s writing in general? Did you see Bad Jews? It was kind of set in the same world, but it was a very different sort of show.

Farmer: I didn’t see it, but I wished I had. I think Harmon is a talented playwright with a good ear for dialogue. As I mentioned earlier, this has some edges to it. I am glad it wasn’t boy meets boy, boy loses boy, boy and boy reunite and live happily ever after with their Akita in their Manhattan loft. The lead has a lot on his plate internally but that didn’t come through here. I think it could have made a difference in how I felt about him. Tighter direction from Jessica Holt would have also helped.

Alexander: Yeah. In the end, it sounds like I was at least a little more entertained than you, but we both had trouble really finding something meaningful to connect with or hold on to.

Farmer: Yes. But I do applaud Actor’s Express for their continued willingness to program LGBT-themed work. Let’s hope their fall opener Company is something we can sink our teeth into more.

Alexander: Yes. I’m super-excited about Company, which is a very early fall opener . . . in July. Sondheim music, classic show, intriguing cast. I predict it will be one of the highlights of the year.

Farmer: Libby Whittemore doing “The Ladies Who Lunch.” Count me in!